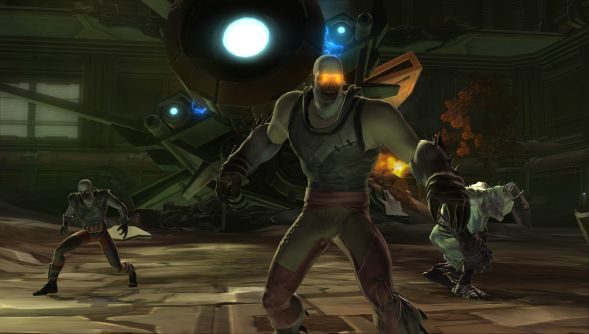 Bioware have already sniffed around Ranked Warzones in The Old Republic, the stats tracking version of their level 10 and above instanced team battles, but a late change in patch 1.2 scuppered it. Since then there’s been the a lot of noise from PvPers looking to keep track of how many people they’ve Force Nipple-Tweaked and Jedi-Annoyed. Hush now: they’ve just announced that patch 1.3 will bring the Ranks.

I’d have called it “Rancor Warzones”, but I love puns just a little too much. Ranked Warzones will allow level 50 characters to get into 8 vs 8 pre-made battles, but with the added benefit of all their stats being tracked, therefore allowing ranked commendations to be doled out. It’s amazing they’ve kept stats out of PvP for so long, as we all know the only reason to kill another person is for stats gain. Anything else is just psychopathy. Numbers make eveything meaningful.

It means you’ll be able to compare your effectiveness in PvP, which the game will also keep track of and use in a ranked matchmaking system. Arguments over the size of your lightsabre compared to another player’s are now irrelevant, as the game will assign you and your team (eight of you can jump into the queue) into balanced fights. All you need to do show up and fight like a youngling at the temple.