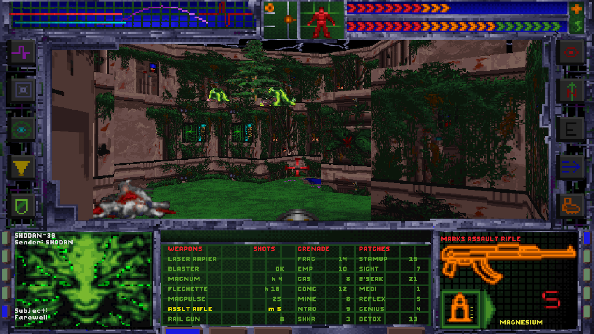 Deus Ex, BioShock, Thief. They’re all games you love, but they probably wouldn’t be real if it weren’t for System Shock. If you really want to dive into the world of the immersive sim, then the original System Shock is a must play. These days it’s exceptionally creaky though: tiny resolutions, murky graphics, and no mouse look at all.

Until now. Good Old Games have just started selling System Shock Enhanced Edition, that makes everything nice and big for modern screen resolutions, sharpens up those visuals, and lets you aim with pin-point precision thanks to mouse support.

The game now runs in 1024×768, and has been sweeped over with bug spray to eliminate any glitches. Controls can now be remapped, and the inventory and items screens have been tweaked to makes them a little more intuitive. It’s all the work of Night Dive Studios, who have taken custody of Looking Glass’s baby.

The game ships with System Shock: Classic, an untouched version of the original that runs perfectly on modern machines, should you be adverse to people updating your memories.