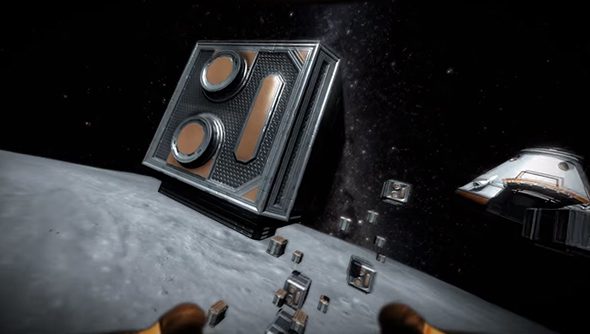 Martian simulator and painful A-Ha reminder Take On Mars is showing off the latest feature in its increasingly varied red planet toybox.

Players can now have zero-G space japes high above the Martian moons, in which they must precariously leap from floating object to floating object, being careful not to fling themselves off into the infinite void of nothingness.

Moving around in micro gravity involves grabbing on to whatever you can and scrambling around on top of it until you’re in such a position that you might push yourself off in another direction. Objects rotate underneath you as you crawl across their surfaces, and go tumbling away from you as you fly in the opposite direction, all nice and adhering to Newtonian physics.

Once floating freely, you have zero control over your speed or direction, instead you’ve just got to hope that your trajectory takes you within grabbing distance of the next chunk of debris. Just like how Sandra Bullock gets around.

Slightly less alarming is this short preview of one of the new features on the Martian surface: the ability to deploy topsoil extractors and resource tanks to start converting dirt into methane, which can then be used to fuel your buggy on night missions.

Hey look, here’s a video of that too.

Is that real science? Probably. The zero G stuff looks rather more like a fun physics puzzle sideshow, but Take On Mars next update looks to develop the sim even further.

Take On Mars is available on Steam Early Access.