If English Heritage preserved fantasy board games, Talisman would be their first acquisition. The questing adventure for two to six players has often been out of print over its 30-year lifespan, but always returned to shelves. Where its rules have been altered, they’ve often been altered back. Though its reliance on random events can make it demonstrably unfair, it remains unrivalled as a dice-driven story generator.

The million or so players of Nomad Games’ digital adaptation seem to agree. And after years of painstaking rule transposition and clarification, the Cheshire studio with a self-set mandate to redefine tabletop gaming have been bold enough to remould Talisman for the 31st millennium.

31st, not 41st, because the events Talisman: The Horus Heresy takes as its backdrop are the ancient history that shapes the Warhammer universe as 40K players know it. The cataclysmic civil war that split the Imperium, birthing the twisted Chaos armies that teenagers so readily relate to, and turning the Emperor from mega-armoured man to deified figure fused into a throne. The uneasy spiritualism of the Space Marines began here – as well as a series of bestselling Black Library novels.

“It was originally Games Workshop’s idea,” recalls art director Andy Bate. “They have obviously had great success with Talisman over the last 30 years and wanted to branch that brand out further. They said, ‘Well, what about Horus Heresy?’. I just jumped on that.” 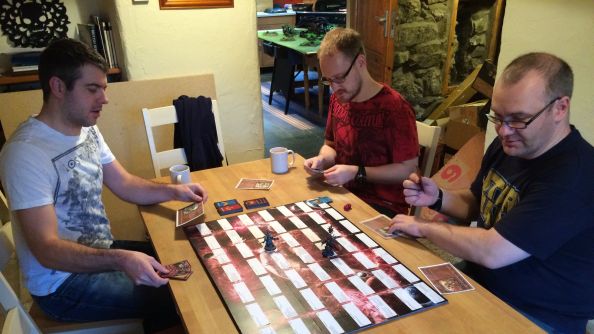 Bate assembled a paper version of the game, borne of ideas and observations Nomad have made while working so intimately with the Talisman ruleset. Two years on, it’s nearly finished and slated for release in February.

There’s one potential point of confusion. Fantasy Flight, Talisman’s current tabletop custodians, have already developed their own 40K equivalent and named it Relic. But Nomad say they haven’t had to make any particular effort to avoid stepping on the ceramite-capped toes of Relic’s adventurers. 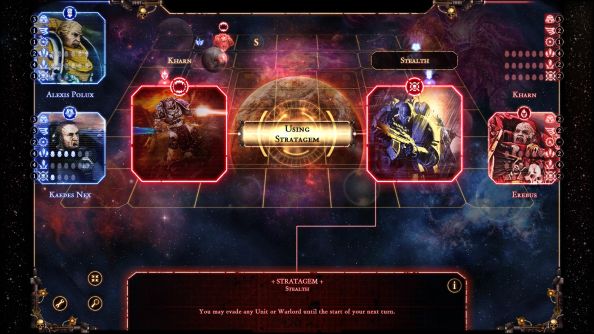 Nomad’s Horus Heresy is distinguished by its scale. Where Talisman’s Robert E. Howard-style heroes might pick up a sword, your warlord will pick up a battalion of Space Marines. In place of a horse, a humongous spacecraft. And instead of clambering across crags and through forests, you’re drifting between galaxy sectors and planets.

“We really want to get across the feeling of being a pivotal part of this huge civil war,” says Bate. “It’s one of the things that Games Workshop really tried to help get across as well.”

That’s one of two great departures from Talisman tradition. The other is its upfront sense of competition. In the 1983 game, players circumnavigate the board getting into solo scrapes – defeating monsters to build their power and pursuing individual agendas. Only occasionally do they trade blows (or spells) before the final scrap for the Crown of Command at the centre.

The Horus Heresy is less meandering, more purposeful in its ways (“At the end of the day,” Nomad MD Don Whiteford points out, “it’s a war game.”). You’re a commander attempting to pull together a scattered legion, in time to tip the balance in a final battle for the Imperium. Players on the same side of the conflict cooperate, trading equipment and swapping vehicles when they cross paths, or combining legions to overwhelm an enemy. 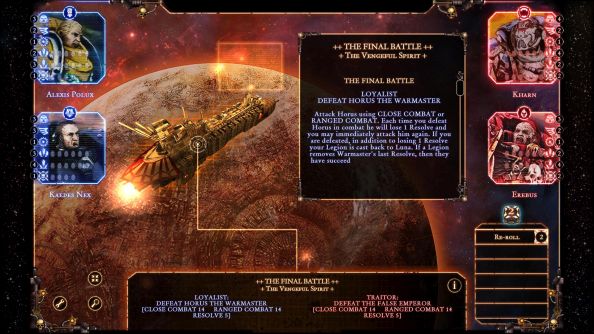 The war permeates every turn: units replace monsters, and their reaction to you stumbling onto their space depends entirely on who you are. If you’re campaigning for the Emperor, expect to do battle with warp-addled beings of chaos. But a supporter of heretical Horus facing the same unit would find themselves with a new follower.

For all that’s new, however, the core ruleset remains, and Nomad think they’ve retained the spirit of Talisman – especially the randomness, dotted with occasional, crucial moments of agency which canny players can seize with both hands. The Horus Heresy is intended to be a pacier game, with fewer interruptions and greater scope for tactical takedowns. But it’s still the unpredictable story generator that has led some of Nomad’s players to recount their adventures in prose on the forums.

“You’re playing with are these infamous heroes and villains,” says Bate. “You get these epic moments where these superhuman primarch demigods are beating seven shades of crap out of each other. When you do win a battle against another warlord, you get to take their weapons off them, which is what happens in the book. [There’s a] narrative that you’re coming up with in your own head.”