Every year there is talk of TF2 running out of steam (no pun intended), and every year it continues to draw a crowd (also no pun intended – or, indeed, present). During the recent four-day Jungle Inferno event the number of concurrent players spiked to its highest level since 2014. It has dropped off a little since, sure, but it looks like it will stabilise around 70,000, which is roughly the same as in 2013.

Find out what else was added to the Team Fortress 2 with the Jungle Inferno update.

The update adds new maps, rebalances weapons that long needed attention, and throws in crates of cosmetics, but it is the new weapons that stand out for me. New items are the yardstick by which I always judge TF2 updates: when maps fall out of favour and cosmetic prices rise and fall on the game’s community marketplace, the best weapons quickly become staples whether you are pushing payloads or capturing control points. 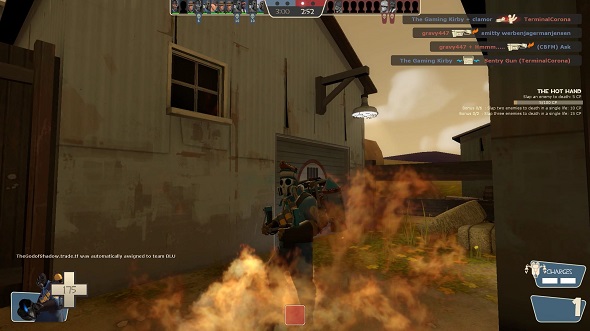 Jungle Inferno added four new Pyro weapons and one for the Heavy, but it is the Hot Hand and the Thermal Thruster that I want to focus on, both going to our favourite arsonist. The Thruster is a jetpack that, like the best TF2 items, creates a completely new playstyle that you never knew you needed, while the Hot Hand is a novelty glove that you slap enemies with. It embraces the silliness that has always set TF2 apart from other shooters.

Combine them and you have got an ultra-mobile Pyro that loves a swift backhander. To unlock them you have to complete new weapon contracts. Some of them seem all but impossible unless you have an enemy team willing to help you out, but collude with the right people (I have found 2Fort servers in the game’s ‘Casual’ mode to be the friendliest) and you can circumvent this mountainous climb. Once I’d achieved this, however, and unlocked all of the weapons, I decided to limit myself to jetpack and slaps only, keeping my flamethrower stashed in my belt.

The Hot Hand is clearly the star of the show: for every slap you get a slot in the kill feed in the same way you do with the Scout’s fish, and a kill flashes up as a SLAP KILL along with an icon of a hand. It delivers swift humiliation to the person on the receiving end – on one occasion I slapped a Heavy nine times before he went down, and I could almost feel his pride crumble a little more with each strike.

It is hardly the most powerful weapon, then, but you can deal out the slaps rapidly and every hit nets you a speed boost. So after you get up in an enemy’s face and tag them once, you can whizz and scoot around them, often getting behind them and whacking them on the back before they have had a chance to react. 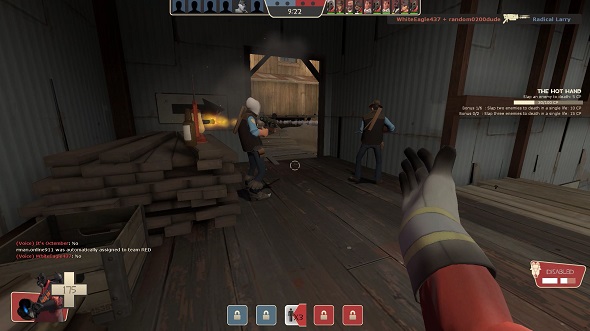 I would love to say that I have that technique down and can give enemies the run-around. But I am still perfecting my, err, method – most of the time I am just randomly changing direction, wildly jerking the mouse towards my foes and clicking like mad. Hey, sometimes it works. Time it right and you can bag some decent double kills, and sending someone sprawling with a slap is so satisfying – the accompanying sound effect is perfect. Even if you don’t pull off the full dance, you still get some killfeed recognition.

What could possibly improve on this lunacy? A jetpack, of course. Strap it onto our happy slapping pyromaniac and he is able to reach new heights. The Thermal Thruster is great for reaching sniper perches (there is little more satisfying than walloping a guy who has sat in one spot popping heads for the whole game), or getting behind the enemy team.

The jetpack might actually have some practical uses in the game’s competitive mode, too. Yes, the shotgun is more versatile in your secondary slot and the flare gun will get you more kills, but having a jetpack gets you out of situations in which you would otherwise have died.

What fun. It is not hard to see why TF2 remains so popular: if a dev is adding jetpacks and novelty slapping hands to its game more than ten years after it came out, then you know it is much more than nostalgia that keeps fans hanging around.