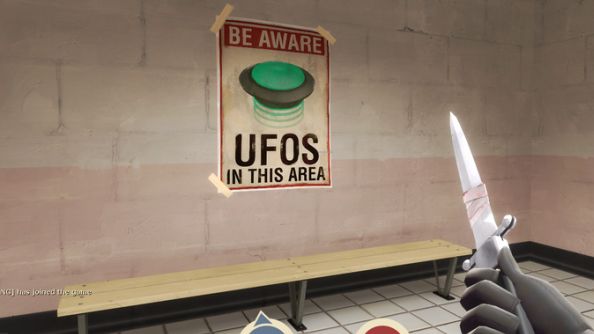 Forget your crop circles and fuzzy photographs of planes – Team Fortress 2 watchers on the Facepunch forums have confirmed the existence of UFOs through datamining.

An update yesterday introduced a number of intriguing strings to TF2’s files – which made mention of ‘saucers’, ‘pulses’, ‘light’ and ‘invasion posters’. It wasn’t long before players found those posters in-game.

‘BE AWARE,” warned one in 2fort, depicting a turquoise vessel with a beam extending beneath it. “UFOS IN THIS AREA.”

And then there it was: visible from the ground in Dustbowl, a classical flying saucer sitting stationary in the skybox.

There’s Halloween coming up – not to mention this apparentleaked TF2 animation from July, which seemingly teases an ‘Invasion’ update. What do you reckon? Are we in for a Roswell-style incident in Valve’s eternal FPS?