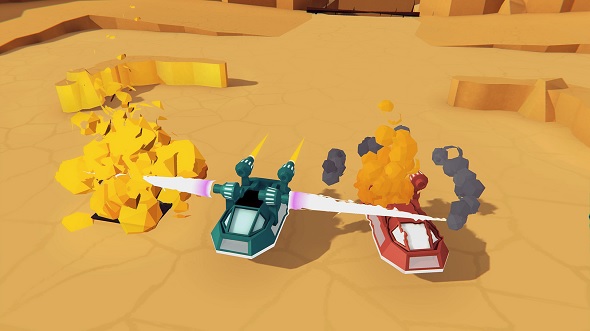 The racing game genre could always do with a bit of a shake up, which is why we’re thankful that Team Racing League has arrived on our desktops, combining strategic co-op with circuit racing.

The ‘team’ in Team Racing League is truly emphasized in how the game is supposed to be played. Here’s how it goes down: two teams of three online racers sit at the start line, and then, when the race starts, they work to be the first team to get one of their racers across the finish line first.

It’s important to note that to win a team doesn’t have to get all three of their racers across the finish first – only one of them has to make it. That frees up the other two to make use of their abilities to disrupt the other team. They can use boosters to bump into opposing cars, connect to form large road blocks, or even use afterburners to roast enemy cars or any of the obstructions they put in the way.

As we said, Team Racing League truly is a team-based racing game, so ideally you’ll want to get some mates together and plan your tactics for each race – otherwise, finding some willing online strangers will have to do. Team Racing League is currently in Early Access, but it already lets you play with between two to six players and has daily events to compete in.

We’re giving away 70 Steam keys for Team Racing League so you can give it a go. If you want to be in with a chance of winning a key, all you have to do is enter our giveaway competition via the widget below.Every action you complete is worth one entry into the giveaway, and the more actions you complete the more chance you’ll have of winning. We’ll also need your email address so we can send you a code upon winning – we won’t send you spam, we promise!