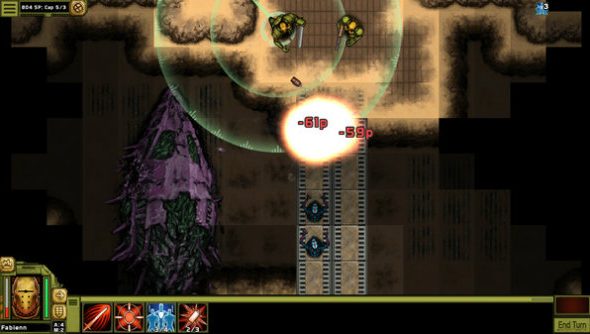 I’m just going to put this out there – this reminds me of the Warhammer Space Marine universe more than a little bit. Apparently this is the fourth game set in the Star Traders sci-fi world, however, and comes with its own lore and rich narrative, despite its obvious inspirations.

You control a bunch of Templar Knights, who are normal humans with their ancestors’ memories encoded in their psyche. They also stomp around inside mechs that are like giant suits of armour, called Leviathan Battlemechs.

Once you get past the obvious similarities to the Warhammer universe, it looks like it could be fairly good, with plenty of strategy, different character classes and tactical options outside of combat. Have a look at the trailer:

Like XCOM’s Ironman mode, death is permanent in Templar Battleforce, so it could create some nice little stories. That time you leveled Dave up all week only for him to eat his own grenade will be with you forever.

Man, I hope you can name your units. A squad of Daves.

The press release promises varied locations – from tight corridors to open deserts – meaning you have to plan and take in the right specialists for the situation – I’ll take flamethrower Dave, sword Dave and rifleman Dave for this one.

The game also boasts over 30 missions and a branching narrative. If you get excited by permanent death – I know I do – you can grab it on Steam for the promotional launch price of £5.94.