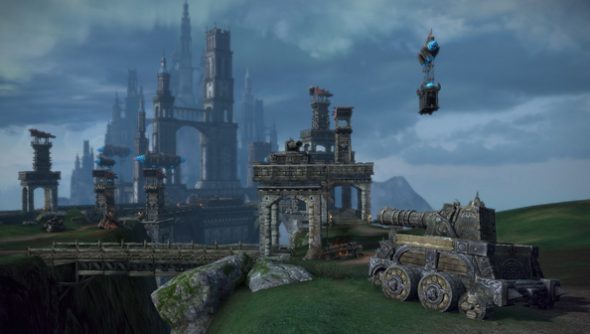 It’s lucky we never have to say anything out loud on PCGamesN. Is that pronounced Corsairsss? Or Corairseses? I never know. In any case, it’s the name of the newly free-to-play action combat MMO TERA’s upcoming battleground, in which humongous 20-player teams will be armed with war machines and pointed in the direction of a stronghold inhabited by, you guessed it, another whopping 20-player team.

Players will need to make use of the battle tanks, airships, cannons and siege ladders provided to bludgeon and outmaneuver their many foes, before swapping roles at half time. The defending team is tasked with protecting an ‘anchorstone’, and the attacking side is mainly required to swash buckles.

En Masse Entertainment reckon players will need to add new cooperative skills to their tactical lexicon to weather the Stronghold, both on foot and in the air. Players of level 30 and above can enter the battleground safe in the knowledge that gear will be equalised to provide a level playing field.

The Stronghold will debut in a new patch on July 2, and current players will be able to download early for a headstart.

“The patch also contains the framework for future content and features that will roll out later this summer,” say En Masse, “including the highly anticipated Alliance system and new raid dungeons.”

All of which sounds like reliably good fun. How are those buckles looking? Sufficiently polished?