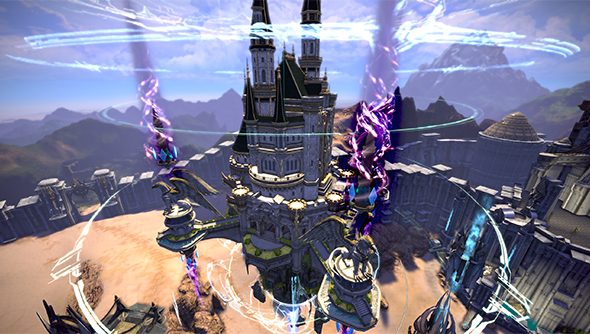 TERA (or Tera if there’s a baby asleep in the room), has just received the scecond part of its Fate of Arun update.

Among a whole host of changes, the update adds flying guild fortresses that can be upgraded and fought over. It’s like having your very own Garden from Final Fantasy VIII. Anybody remember that game? Anybody get that reference? Sure, it might not be very timely or relevant, but I think it’s a good comparison.

The patch introduces a new instance in the clouds, the Sky Cruiser Endeavour, as well as a new difficulty setting for the dungeon added in the previous Fate of Arun update, Bathysmal Rise. That’s “Hard”, in case you’re wondering. Rarely do we get an additional, easier difficulty setting.

Those flying guild fortresses can have NPCs employed to run around and act as merchants, while other customisations can be unlocked through some inter-guild PvP and PvE leagues. The game’s ten best guilds will have their hoverhomes on display next to one of TERA’s capital cities.

If any of this means anything to you, you can find out more on the TERA blog.