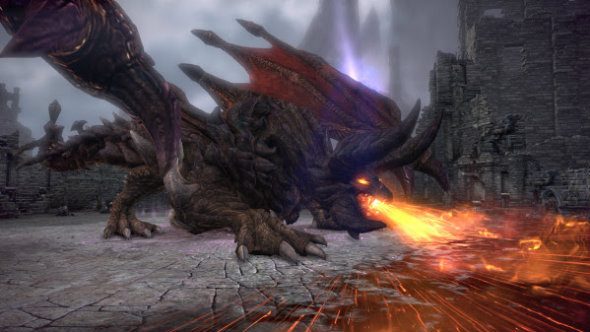 Bluehole’s nice-looking, mount-riding MMO TERA just got a hefty update that promises to unleash a band of powerful beasts of legend on the community. The meat of the update is a massive 30-person raid that sees players take on a huge ancient dragon.

“At the heart of the new ‘Attack of the Dragons’ release is the ruined entrance to the Harrowhold,” says the press release. “Divided into four distinct phases, this 30-person raid pits players against the powerful ancient dragon Vergos and his evil spawn.

“The greatest challenge in Arborea to date will place epic demands on the players in terms of time, skill, coordination and teamwork.”

You can get a good look at Vergos, a dragon with “endless power”, in the trailer embedded above.

It’s not just a raid though, there’s also some Guild vs Guild action contained in Attack of the Dragons. The option to challenge guilds to a test of strength returns, after being switched off earlier in the year. It’s now been reworked, so guilds will be free to pit their might against any others from around the world.

The update also debuts an archer revamp, with the class undergoing plenty of tweaks and being granted new skills such as Find Weakness and Chase.

Lastly, the final zones in Arborea are now accessible to flying mounts.