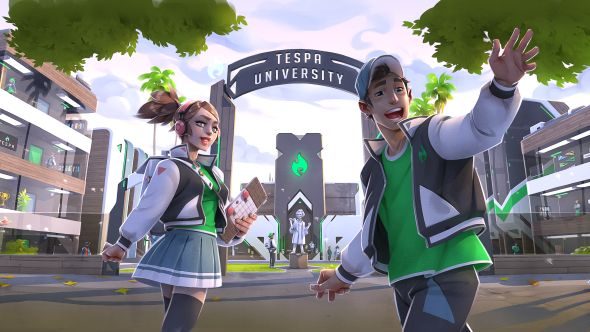 A key part of any sporting scene is making sure it has a strong base of young players from which to draw the stars of tomorrow. This means schools, colleges, and universities play a vital role in building both teams and fanbases, particularly in the US. Tespa’s co-founder Adam Ronsen helps run this for a half-dozen games – but he says starting something similar in Europe isn’t as simple as transferring the same model.

Tespa open membership is available for the 2017-18 season.

“Every year when we host events we get a lot of interest from students around the world,” Ronsen says. “When we announce Heroes of the Dorm, or last year our Overwatch series, there’s definitely interest from a lot of other regions [wanting us] to come and help facilitate structured competition there.”

While in the UK, for example, there are organisations, particularly for League of Legends, they operate on a very small scale with little to no official support from the universities themselves. They certainly don’t have their finals broadcast on ESPN. Tespa want to change that, but it ain’t easy.

“We’re definitely [considering] what that could look like. As we look at international we also want to make sure that we do our due diligence and when we expand we do so in a proper way. We don’t wanna just take the same model that works here in North America and drop it on Europe because the collegiate ecosystem is completely different in Europe.”

Due to the way traditional national sports leagues were set up in the US, there’s already a base to build upon, one that is very used to funding scholarships and advancing careers based on exceptional play. Not so in Europe.

“I think it would just fail dramatically if we did that and didn’t make any changes. One of the things we’re very attuned to is that we need to be careful with how we localise, how we change our programs to fit each region.”

Ronsen makes it clear it’s something Tespa – and no doubt other organisations as well – are thinking about, but they don’t have any firm plans at this time. Given they just went through their big announcement for the next year of competition, it’s likely going to be 2018 or later before we hear more.

Europe and SEA continue to be dominant forces in just about every relevant esport, and have been for a long time without a firm collegiate system. Whether falling behind in that area will have a significant impact, we won’t know for a few more years.