Lesleigh Hayes is a physicist, part of a team that left Earth to save the planet from ecological collapse. Now, she’s trapped on a ship, prey to a mysterious monster. To make matters worse, her team’s failed mission has left the fabric of space and time looking more like a tattered dishcloth.

Since deciding to revamp their game just three months ago, Tether’s team have had to bend time too. Using Unreal Engine 4, they’ve already developed a prototype that pulls on the robust systems and reactive traditions of the immersive sim genre. 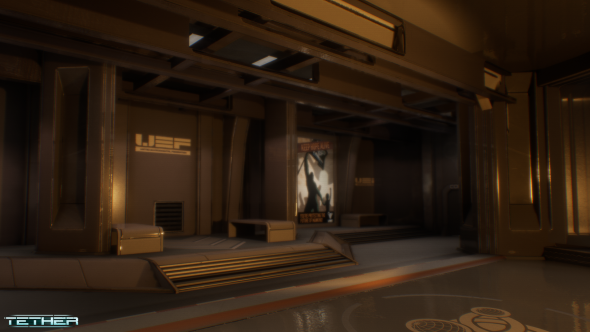 “Lesleigh’s conundrum is that she’s never got enough time to be at home to raise her children,” Freesphere Entertainment creative director Mark Gregory explains. “So we wanted to know what we could do with time that was interesting.”

What the Freesphere team decided on was an experimental device: one that could freeze and rewind time, encouraging creative solutions to problems in Tether’s dynamic environments.

It works like this: you can reverse time by up to ten seconds – or at least, right now it’s ten seconds. The final figure is still to be determined during testing. And if you’ve moved an object during those last ten seconds, it’ll move in reverse. You can then pause the game for a further few seconds, interacting with the temporary world you’ve created – perhaps climbing on a book suspended in mid-air, engaging in some impromptu platforming to reach a new vantage point.

Making it work has been a technical challenge, to say the least. Only one member of Freesphere is an experienced coder, and much of the game is consequently built using Unreal Engine 4’s simplified scripting system, Blueprint. But in order to achieve their ambitions in time manipulation, the team took advantage of access to the engine’s source code.

“We actually ended up coding that in C++ rather than Blueprints, because it literally affects every prop around the environment,” Gregory says. “It became too intensive on the system, because we had so many more Blueprints running in the background.”

Thanks to that instance of hard coding, the team have managed to keep Tether’s frame rate high during time manipulation – a saving they expect to be grateful for later in development. 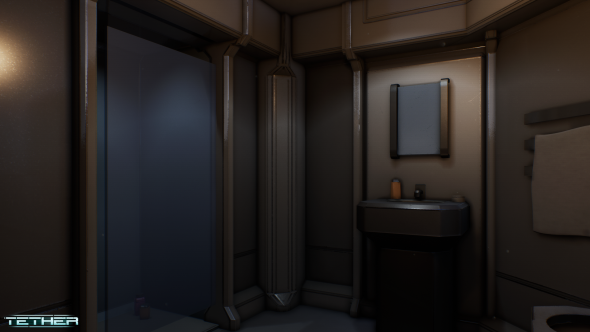 “How can we make player choices matter, and not just provide the illusion of it?”

It’s a question plenty of developers have asked themselves. And Freesphere specifically want to make sure that willy-nilly use of the tether device wouldn’t come without consequence later in the game. You’re picking at the fabric of space-time, after all.

“There are tie-ins with our dialogue systems, which means there are a lot of scripts running in the background saying, ‘Ok, the player keeps using the device in getting through this section, so let’s make this NPC react with them in this way,’” Gregory expands.

Systems like these can sometimes make all the difference. Think of Dishonored’s divergent consequences for Low Chaos and High Chaos playthroughs; the hook that connects you emotionally to your actions in-game. But the actual process of keeping track can be deceptively simple.

Once your use of the tether device exceeds a set numerical threshold, the game knows to switch to a particular dialogue response for a nearby NPC. “We’ve got a database running in the background that checks off how many times you’ve used the device to get through a certain checkpoint,” Gregory says. 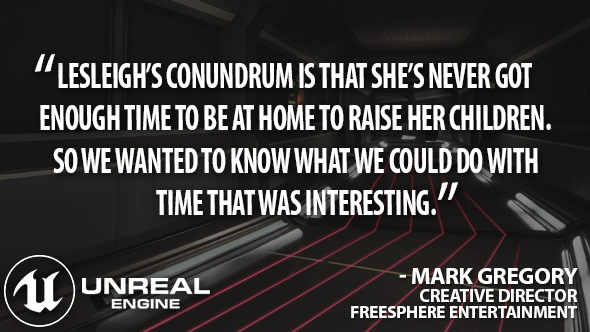 There are also moments when the backend database ticks a certain box because you’ve handled a challenge in a particular way – via hacking minigames, for instance. This allows for JC Denton bathroom-style moments. You’ll remember if you’ve ever triggered it: Deus Ex knows you’ve visited the women’s bathroom in UNATCO HQ, and has director Joseph Manderley reprimand you for it in a single line of dialogue. These are the moments when it feels as if a game has seen you – and it’s exactly what Tether is aiming for.

“It’s algorithms running in the background, cross-referencing each other all the time,” Gregory says. “We don’t plan on really telling the player with a visual prompt – there’ll be no Paragon or Renegade popping up. We want the system to be reactive to the player. Hopefully that’ll be the nicest surprise – how the whole experience is tailored to them.”

In the past three months, Tether’s team have torn into their game’s innards, replacing nearly everything in their quest to make a fantastic immersive sim. Though this early prototyping phase leaves the future uncertain, they are confident in the odd cocktail of parental horror and reactive systems that they have so far concocted.

Tether is coming to the PC. Unreal Engine 4 is now free.

In this sponsored series, we’re looking at how game developers are taking advantage of Unreal Engine 4 to create a new generation of PC games. With thanks to Epic Games and Freesphere Entertainment.