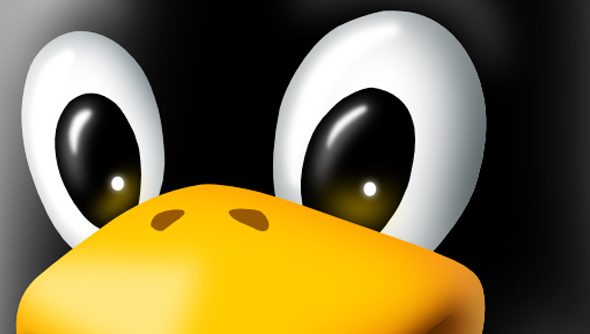 Earlier this week I called Linux a dumb operating system for jerks because I’d had a bad time with Ubuntu, which in hindsight is like saying wheels are a terrible idea because you saw a car crash. Ubuntu isn’t Linux, it’s just the damp towel around Linux’s waist, the gaudy umbrella in its cocktail, the lens through which its light shines, the hole in the cubicle wall through which its genitals protrude. Ubuntu is a contentious facade wrapped around the innocent Linux, and I didn’t make this clear enough in my previous article. A few people got in touch to point this out, offering friendly advice and helpful direction, taking me softly by the hand and whispering gentle wisdom in my ears. So here are the four biggest mistakes I made when installing Ubuntu, that you might avoid doing the same.

MISTAKE ONE: I used the Wubi installation of Ubuntu

When installing Linux my goal was to retrieve the free Team Fortress 2 penguin Valve were dishing out to new Linux players, not because I am particularly interested in TF2tchotchke, rather because it seemed like a reasonable test of how straightforward a Linux setup would be for the average migrating Windows user. So I took the path of least resistance, adopting the Linux distro recommended by Valve and using the Wubi installer (again, without wanting to apportion blame, this wassuggested by Valve themselves), which sets up a bootable version ofUbuntu within Windows. This isn’t the ideal way to install Ubuntu, as was pointed out to me, as it’s essentially running an emulated, hobbled version of the OS. No wonder it was spewing out error messages like digital confetti, poor Linux was under some duress, struggling to breathe with a big Windows 7 fatty sitting on its chest.

This time around, I didn’t use the Wubi installer. I gave Linux a whole hard drive to itself and used GRUB, a boot loader for managing multiple operating systems, to boot to it.

MISTAKE TWO: I used the latest release of Ubuntu

I’ve quickly learned that Linux andUbuntu arenot really “for” people like me. My idea of staying on the bleeding edge of OS tech was that time I installedWindows XP Service Pack 2 against the advice of friend. “I can handle it,” I told him as he stood, mouth agape, staring at the progress bar. And I could. But the latest versions of Linux distros, I now understand, are more like lawless Wild West frontier towns. They’re half-constructed, embryonic, problem-infested works in progress and they’represented with the chunky caveat that things might not work as they should. At the best of times, Linux is unfriendly to newcomers, at the worst of times it’s Ubuntu 12.10. So if you don’t know what you’re doing, you shouldstick to the LTS (long-term support)release, which is Ubuntu 12.04.

MISTAKE THREE: I even used Ubuntu in the first place

There are a buttload of popularLinux distros available, of which Ubuntu is but one. Apparently it’s falling out of fashion with the Linux community, while distros likeLinux Mint are rising through the ranks like twinkly eyed boy pop stars. Mint looks a lot more like Windows than the waywardly designed Ubuntu (which, like a petulant teenager, slings its taskbar to theside of the screen, where it’s at its most useless). It has a start menu that doesn’t advertise trousers to you, it has helpful tooltips for gutless novices like myself, it’s much faster (probably as it’s not installed under Windows this time) and far less intimidating.

It’s not without its own set of bizarre problems: YouTube videos would play at 5x speed until I changed the default audio device, streamed music would skip whenever I sent or received a Skype message, and most of the software I use for entertainment and work simply isn’t available: Adobe Creative Suite, Spotify, basic stuff that makes an operating system actuallyuseful. That said,I can understand the appeal ofhow nothing is obfuscated by an invisible Microsoftnanny, how you can nuke your system with a few keystrokes in the terminal, how you’re trusted to act like a grown up with the technology at your fingertips. Linux puts you nearer to your PC’s guts than you’ll ever get with Windows, for better or worse. But for me, a regular Joseph Schmoseph, there’s no benefit to be had.

Regardless, this time I installed Linux Mint. It was better.

I think this raises the most interesting point of all. I’m the epitome of the average PC gamer, somebody with a modicum of tech savvy, just enough to update drivers,partition a drive, replace a graphics card,install an operating system. But this middling degree of know-how isn’t enough to get by with either of the two Linux distros I’ve tried, not without putting in the time and effort required to learn how it all works. Time and effort that results in me owning a system that, as far as the average PC gamer is concerned, doesn’t do anything Windows already does better. A system that in fact does many, many things worse.

A common criticism I’ve seen of users who fail to wrap their heads around Ubuntu is that they’re simply unwilling to learn something new, but these same confused Linux-newcomers would have no such problems learning the differences between Windows and Mac OS, or iOS and Android. That highlightsa real usability gulf, onethat’s preventing Linux from ever becoming more than a playground for an insular community ofprogrammers. And that’s what frustrated me. That’s why I called it a dumb operating system for jerks, because I’m a petulant, spoiltidiot who’s come to expect much, muchbetter.

So it’s interesting that Valve seems to be expanding into a spacewhere the vast majority of their customers will be unable to follow. Which suggests to me that Valve’s plans are grander and more long-term: they want to establish Steam as a Linux-compatible platform, promote development of Linux-compatible games and eventually, at some point in a hazy future, have an open-source operating system — perhaps their very own distro, a SteamOS —to stick in a box and sell.The decision to dangle a free penguin in front of TF2 players makes somesense too: if just 1% of players are converted to Linux, they’ll have gained a invaluable foothold and put into actiona mighty anticipatory swing of the wheel ahead of a potential commercial iceberg years down the line.

Whatever their plans, I doubtGabe is expecting a Windows exodus any time soon. Not as long as idiots like me are playing his games.

{"schema":{"page":{"content":{"headline":"Four stupid mistakes I made when installing Linux to get a free Team Fortress 2 penguin","type":"news"},"user":{"loginstatus":false}}}}