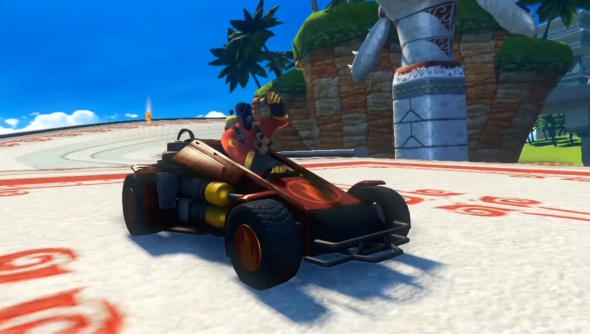 Inter-game reference is the best thing. It’s the hip hop soul on show in Super Meat Boy and a thousand arcade fighting games that sees the familiar flipped on its head, the solemn made hilarious and the trite made meaningful by new context.

Referencing makes two games stronger. And sometimes, it allows you to watch TF2’s Heavy and Total War: Shogun 2’s iconic samurai duke it out on a cartoon race track.

Best is the character we can only presume is Football Manager’s unseen protagonist. As previously reported, Pyro and Heavy are not two but one character, swapped between when the tracks transition from land to sea and back again.

Ace. About time we had a good kart racer on PC, isn’t it?