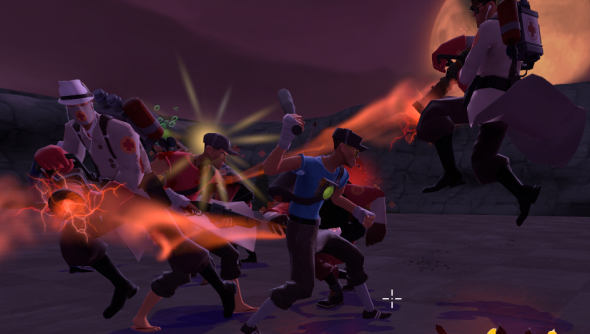 Team Fortress trading essentially comes down to this: you have a hat, and someone else has a hat. You want their hat. You open the trading window and you swap hats. Everyone is happy and hattier. That really should be the beginning and end of the Team Fortress 2 trading system, but the fans have taken it and turned it into something much more complicated. There is now a fluid economy based on item rarity and their own desire/greed. It’s no longer a case of just swapping them like football cards. And we think it’s something you should get involved in. For fun and for profit.

The language in Team Fortress 2’s chat channel is slowly changing. I’ve noticed more and more people talking about their backpack contents. There’s a worth to what you find or craft: people someone somewhere will want it, and that gives you some power. The reverse is true as well: if you want something, you’ll have to negotiate for it. An economy has sprung up in the last year: before it was really about what the item was worth to you, but after millions of trades and data mining the community is realising that not all hats or crates are created equally. So when people say things like “Vintage xx” for sale, what they mean is they have an original game item, not promo or purchased.
The base currencies are metal and keys: with metal you can make more items. Keys are a bit different and it’s probably worth staying away from them as a beginner, but they’re important because they represent real-world value: someone’s spent money on them in the Mann Co. Store. Rare items, like the Mac Earbuds, are almost always talked of in key value. But this is a beginners guide, so it’s best to stick to metal as the primary currency. I’d expect your first trade to happen between a friend on a normal server, according to the little scenario in the opening paragraph. The first time you do it you’ll realise how much fun it can be. If only there was places dedicated to just trading? There are! How to find them: in the TF2 Server browser, arrange all the servers by and search the filter for the map name “trade”: you’ll find a few servers all set up for that one aspect. But before you head in, there are a few things you should know.

First, run TF2 in a window so you can consult the Item Price Spreadsheet. It’s a site that acts as a guide for what people are paying for. Also, there’s the backpack viewer, a site that people will refer you to in the chat sometimes so you can see what they have to offer. You might also want to keep Steam Repopen as well. Any notorious traders/scammers will be logged in there. Don’t fret: the community is still overwhelmingly nice, but there are a few assholes.
With those open, head on into trade with 20+ players in it. First thing you’ll notice: chat is very chatty and spammy. This is how people advertise: they bind the text to a button that automatically writes and sends it. There is some lingo. “Rec” is “reclaimed metal” made by smelting weapons down to scrap and then combining the scrap. “Ref” is refined metal, which is the same process but takes more metal to make. One scrap is equal to two smelted weapons. One reclaimed is equal to three scrap. One refined is equal to three reclaimed. It takes 18 weapons to make one refined metal. You might want to prepare and smelt a few unremarkable item before you start.

So, to trade. Don’t be shy. A lot of people are trading just for the fun of it and they have a lot of stock. Know what you want and what you want to pay for it. We’re not used to haggling for things, but actually here you can get what you want if you’re persistent (not pushy) and nice and willing to chat . Nice gets you a long way. The spreadsheet is a guide and not a god, so there’s wiggle room in everything. You might want to start selling before buying, and do it with something you’re don’t care about so it’s easier to let go. It’s a good way to get a feel for how people will talk and how long they’re willing to spend. Just make an offer and see how they react.

When you want to get someone’s attention, just ask. It can be difficult to get noticed in the chat spam, so make sure you’re nearby. I’m not sure of the etiquette of sending a trade request without first establishing they’re interested, but ask yourself this: do you like popups invading your game? Me neither. But when you’ve discussed what’s for offer and shown the player what’s in your backpack, then it’s okay to send a request.

The trade window is monumentally simple: you drag what you want into the top window and their offer will appear in the bottom. Make sure you mouse over and see they’ve put the correct item in: some people like to swap out normal weapons for the unusual offered. When you’re satisfied, check the “Make Trade” box and keep an eye on their window to make sure they don’t try and swap weapons AFTER you’ve made your offer, or you’ll have to rather quickly. When both people have agreed and checked the box the trade can be made. Feels good, doesn’t it? Want to do it again? If there’s something you really want this is a good way of finding it. Head into a server, use the spreadsheet and tell people what you want and what you’re willing to spend. Sometimes it’s worth offering an equivalent rather than the currency: hat for hat, weapon for weapon. You’re dealing with people, they can be swayed.
That’s the crux of a lot of trading: it’s human interaction. It deals with want, sometimes greed, but since I started I’ve managed to get everything I wanted without ever visiting the Mann Co. Store.

In that regard,TF2’s free-to-play model is amazing. Never pay, not in-game and absolutely not for an item over Paypal- I mistrust anyone who takes it into the real-world. You can haggle your way to any number of hats. There is no excuse not to be the most fashionable Heavy on your favourite server.