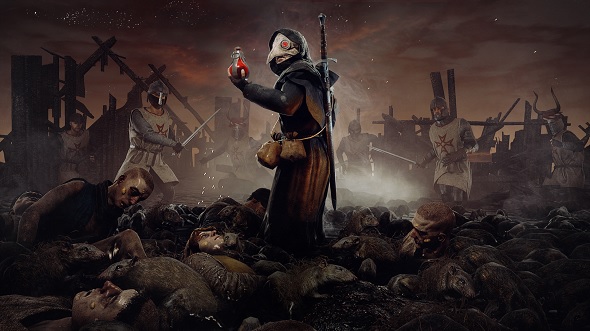 Y’know what? We’re pretty sure 14th century Europe is a place you don’t really want to hang out. Not only do the surgeons not wear gloves and cough onto your open guts, there’s even less chance of getting some of McDonald’s limited-edition szechuan sauce. Still, it provides what may be one of your biggest gaming challenges yet: can you survive the black death?

This is the question at the heart of a game called, well, The Black Death. It’s a survival game set within that most desperate time of European history – when everyone was puking, growing buboes, and then dying a painful death on a bed of straw. Your task, apart from avoiding the disease as it spreads, is to find a cure. Yeah, good luck with that.

But, oh, what’s this – a new update called Pestilence has launched today. It might give you a better chance of making it through. It lets you enter the multiplayer world as a plague doctor, and not only that, it overhauls much of the game based on feedback. That includes everything from inventory menus to tweaks to how you customise houses.

To celebrate the arrival of the Pestilence update we’re dishing out 50 Steam keys for The Black Death. Not everyday you sign up to get the black death now, is it? Take this opportunity, then, by entering the competition via the widget below.Every action you complete is worth one entry into the giveaway, and the more actions you complete the more chance you’ll have of winning.We’ll also need your email address so we can send you a code upon winning – we won’t send you spam, we promise.