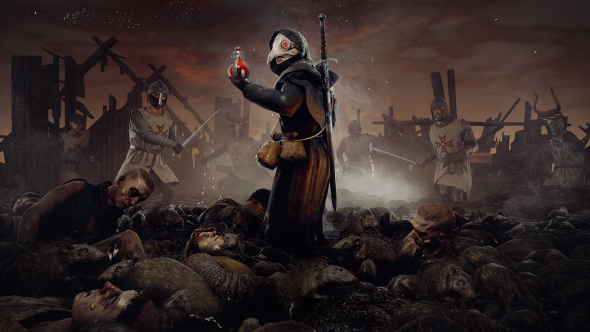 Last month, researchers in Oslo published findings that suggested a terrible injustice had taken place. For centuries, rats had been blamed for the plague that tore through Europe in the 14th century. But using historical mortality data, the team simulated the spread of the disease and found that human fleas and lice were the most likely cause. Generations of species misunderstanding may finally be undone by computer modelling.

The goals of game development are rarely so lofty, but Small Impact Games, the developers of The Black Death, are working to simulate the spread of the plague too. Their aims are rather different: to build a satisfying, if somewhat harrowing, survival game in Unreal Engine 4. 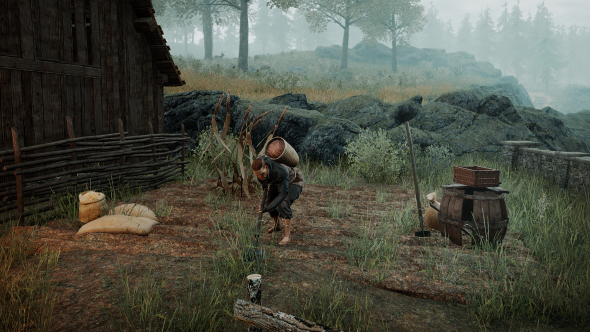 It begins not with rats, or fleas, or lice, but with a single villager on a server. Each of the Black Death’s serfs, most of them innocuous enough, have a small percentage chance to develop the disease by themselves, becoming deadly carriers.

“The generic villager will wander around and say lines,” Small Impact’s James Rowbotham tells us. “And if they’re infected, when they walk past a player or another AI, they have a chance to spread it to them.”

As NPCs bump into each other, the momentum of the plague begins to build.

“You can sometimes walk to a village and everyone is just a mess,” the studio’s Cameron Small says. “And you think, you know what, I’m going to go somewhere else.”

The team used Unreal Engine 4’s toolset to quickly prototype a sandbox. They wanted to find out just how fast their plague could spread.

“If we’d made our own engine from scratch, it would’ve been much more of a headache,” Rowbatham recalls. “Without the engine, all these systems that we have would’ve been a complete nightmare.”

The team initially developed a complex system of symptoms with different effects and tracked your infection with a percentage. But it felt unnecessarily convoluted. Now, catching the disease is instantaneous.

“We refined it down to what we have now, which is that when you get sick, you have a period where your hunger and thirst drains fairly rapidly,” Rowbatham says. “And once that’s gone down, your health starts to go. It’s more realistic in a way – you have to keep well.”

Once you fall victim to the plague, you become a danger to those around you. At random intervals the sickness will take hold, occasionally causing you to throw up, like Left 4 Dead’s Boomer in period costume.

“Then we do a volume check on players around you,” Rowbotham explains. “If they’re next to you and they don’t have the plague, they get it. It’s something you can’t control, because you’re randomly emitting it.”

“It’s not like a swarm that spreads through the server,” Small adds. “We loved that idea early on, that it would be something that passed through the game and it would start making people sick. But we thought it was important that players knew what was happening and what caused it.” 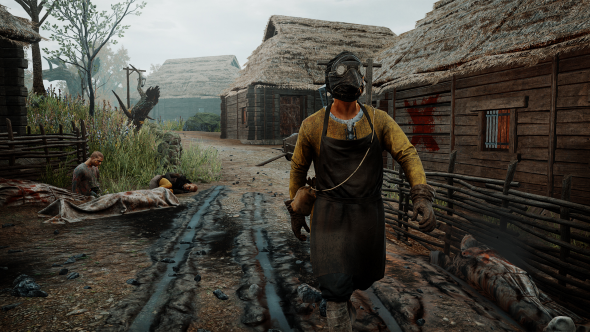 While the spread of the real-life pandemic was ambiguous enough that it still inspires studies today, Small Impact sought the clarity of good game design – a disease with symptoms that players could recognise and avoid like, well, you know…

“There are a few artistic licenses, like the boils growing on the face,” Rowbotham admits. “They would mainly be on the armpits. But in The Black Death you can actually visibly see [the symptoms] above people’s clothes. We use a lot of materials in Unreal to telegraph the plague to the player.”

In places, Small Impact have pulled on some of the superstition of the time. In their research, they learned that the smell was believed to spread the disease. And so, in The Black Death, the flies buzzing around the heads of NPCs alert you to their sickness.

“We’re tapping into what people thought it was,” Rowbotham says, “rather than the actual science of it.” 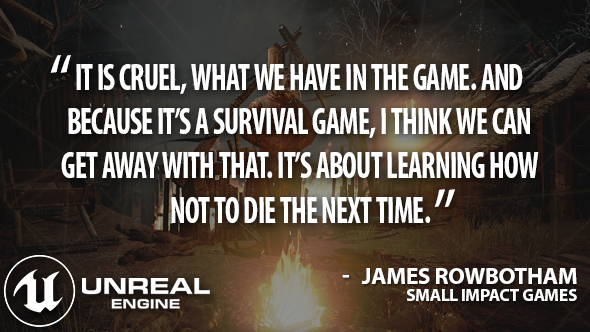 So much of our discussion around multiplayer games concerns what is fair, but squaring fairness with history is tricky. In reality, up to 60% of Europe succumbed to the plague. Small Impact have given themselves an unusual job – to balance the needs of a survival game with the sobering story of the real Black Death.

“It is cruel, what we have in the game,” Rowbotham says. “And because it’s a survival game, I think we can get away with that. It’s about learning how not to die the next time.”

In this sponsored series, we’re looking at how game developers are taking advantage of Unreal Engine 4 to create a new generation of PC games. With thanks to Epic Games and Small Impact Games.