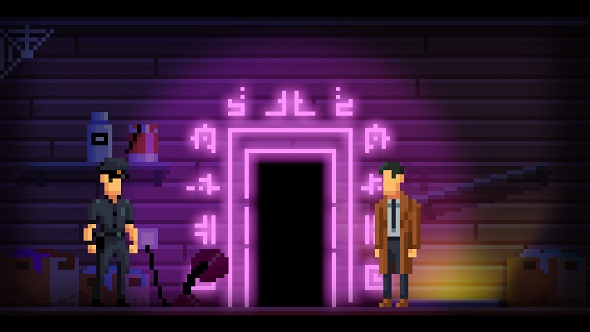 When demons, the occult, and cultists are hanging out in your neighbourhood, who you gonna call? Forget the Ghostbusters. You need Francis McQueen of the Darkside Division to come snooping around.

McQueen is the star of The Darkside Detective, a new classic-styled point-and-click adventure game, which combines horror themes with its distinct sense of humour.

It has you follow McQueen and his mate, Officer Dooley, as they investigate six bizarre cases, as is their calling. You can expect to come across supernatural beings, unusual eldritch encounters, and plenty of missing cats. It’s all rendered in charming pixel art, too, which it has to be said, helps to obscure the spooks so that your imagination fills in the details.

Plus, there’s music from Ben Prunty, how has previously composed for games including FTL: Faster Than Light and Gravity Ghost. His tunes help to bring both the dark events and the buddy comedy that rises and falls across the six cases you investigate.

If you want to win a copy of The Darkside Detective on Steam then you’re in the right place. We’ve giving away ten copies of the game and all you have to do to be within a chance of winning is enter via the widget below.Every action you complete is worth one entry into the giveaway, and the more actions you complete the more chance you’ll have of winning. We’ll also need your email address so we can send you a code upon winning – we won’t send you spam, we promise!