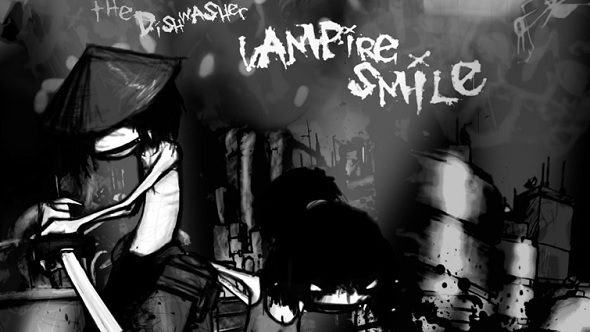 Previously only available via Xbox Live Arcade, the two-person development team at Ska Studios have finally brought Charlie Murder and The Dishwasher: Vampire Smile to Steam. Both fast-paced 2D beat-’em-ups, they are now available as part of the new Skallection, along with Salt and Sanctuary.

Conquer challenges with your coterie of chums, thanks to this list of PC co-op games.

Released back in 2011 as a sequel to their first game The Dishwasher: Dead Samurai, The Dishwasher: Vampire Smile has players cutting through hordes of enemies as either the titular Dishwasher or his step-sister Yuki. Each one has their own campaign which can be played in either single-player, local or online co-op. Much like their Souls-like Salt and Sanctuary, Vampire Smile exhibits the monochrome, ultra-violent aesthetic that Ska Studios has become famous for. If you’re one for difficult action games and hyper-edginess almost to the point of parody, Vampire Smile will be one for you.

The most colourful game in Ska Studios’ back catalogue, 2013’s Charlie Murder has players choosing between members of a garage punk band who are tasked with eliminating a demon army raised by a former band member. While both Charlie Murder and Vampire Smile are beat-’em-ups, Charlie Murder is more in the style of arcade games like The Simpsons Arcade or Turtles in Time, as four players can team up to fight against hordes of zombies, ninjas, witches and dynamite-covered sharks.

As well as character-specific abilities like being able to throw acid-coated chainsaws at people, players can equip new moves by getting special tattoos at the in-game tattoo parlour. Despite its name, Charlie Murder is definitely more tongue-in-cheek than Vampire Smile, as you can’t help but laugh when you see a bunch of ninjas being taken out by someone doing a face-melting drum solo. Like Vampire Smile, Charlie Murder is also playable in single-player, online and offline co-op.

If you are looking to get all of Ska Studios’ games in one package, the special Skallection bundles together Salt and Sanctuary, Charlie Murder and The Dishwasher: Vampire Smile for $32.27/£23.43. You’ll save around 15% by buying the Skallection, compared to purchasing each game separately.