This is a bit of an odd turn-up. A little bit of digging from fansites has revealed that The Division’s full map is smaller than some expected. It also doesn’t contain areas that were shown in both recent trailers and the original E3 2013 reveal. In fact, in total it’s all of one third of Manhattan, though recreated in 1:1 scale according to Massive. That’s impressive in detail and means there will be plenty to do, but also leaves quite a lot of New York as yet unimplemented.

Where does The Division come in when you’re talking about most anticipated games of 2016?

The news comes out of a combination of fansite Division Zone, The Examinar, Eurogamer and the Open World Games YouTube channel. Division Zone put this map together to show which area of Manhattan we’ll be getting and where the various trailers were set: 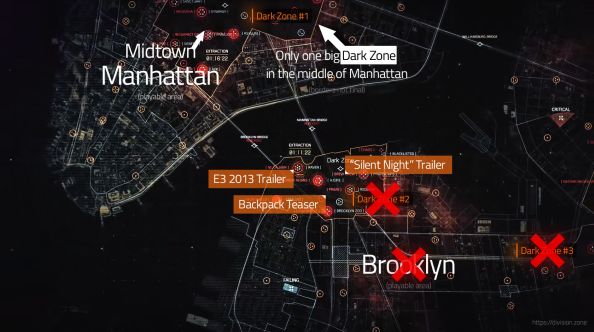 In the top left is what we’ll be getting, while all that stuff in the bottom right around Brooklyn will no longer be appearing. Clearly it’s built in some form, since it’s shown up in gameplay trailers, but whether it was made specifically for that purpose, remade into something else in a new area, or there was confusion about location at some point isn’t known. It’s possible the game will expand into more areas later on, but Massive would still have the whole of Manhattan to go before Brooklyn.

Division Zone also have a screencap from a recent Open World Games video showing what the actual map looks like: 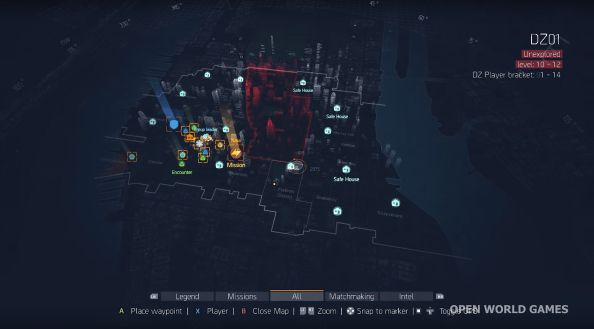 This has been combined with a quote from The Examinarwhere creative directorMagnus Jansén says “We are going with Midtown Manhattan. It is because of the 1 to 1 re-creation and the way the pandemic has [happened]. Basically, everything has been hit and there are no more resources because everyone tried to get out. There is no more gasoline in the cars, there is no traffic, you’re on foot.”

Obviously, zoomed out to this degree it doesn’t look like a lot of space to play an entire game in, especially with the sizes of worlds we’re used to exploring in the Witchers, Dragon Ages and Metal Gear Solids of yester-year. But it is a built-up area – that means tall buildings with a lot of floors, underground parking garages and the like. There’s room for the vertical more than in your average fantasy world, outside the odd mage tower.

Eurogamer have a little more on what The Division’s New York will actually look like. Essentially, if your idea of it is big skyscrapers, the odd park and lets of roads, you’re bang on the money. It’s ‘tourist NYC’ as they put it – what those of us who’ve done nothing but fly in and out of Newark airport imagine it’s like.

So – no Staten Island or the Bronx. What will show up first in the inevitable DLC? A slightly dishevelled looking Lady Liberty?