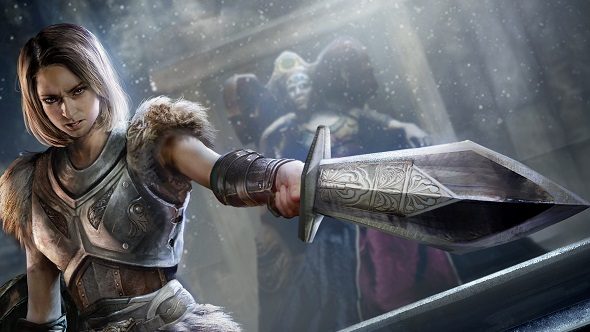 If you’re a dedicated Bethesda fan, this new initiative will probably be of interest to you. As part of a partnership between Twitch and Bethesda, fans can earn free goodies by either streaming or just watching Bethesda games on Twitch.

Find the card game that’s right for you with our list of top PC CCGs.

By linking your Twitch and Bethesda.net accounts, viewers and streamers can earn random ‘Drops’ for select Bethesda titles. This system is going be rolled out during Bethesda’s E3 showcase on Sunday, where viewers with linked accounts will receive Drops for The Elder Scrolls: Legends. This will include card packs and in-game currency for Bethesda’s CCG, so definitely tune in if you’re an avid Legends player.

On June 14, Bethesda are planning to roll out Drops across all streams of The Elder Scrolls: Legends, meaning anyone watching or streaming the game can receive free swag. While Drops will only be available for Legends to start, Bethesda plan to roll out these freebies for any game that uses Bethesda.net.

Drops are apparently “just the beginning of [Bethesda’s] partnership with Twitch,” so stay tuned for more information in the future. In the meantime, make sure to link your Bethesda and Twitch accounts together ahead of tomorrow’s presentation, so you can be potentially rolling in free money and card packs.