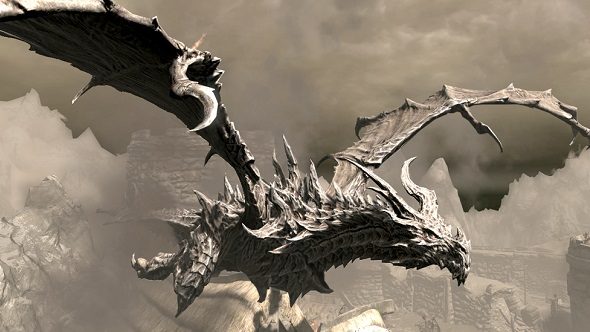 Good card art is important to a CCG. You want it to be expressive while also staying true to the character art seen in the original game. Unfortunately, for Elder Scrolls lore buffs, the artwork created by developer Dire Wolf Digital for Elder Scrolls Legends has become quite the point of contention.

Check out this list of the PC’s best CCGs.

Pointed out by Reddit user ShiaLePork (which is a fantastic name by the way), some of the cards in the recent Heroes of Skyrim expansion are not that accurate to series lore. Within the world of Tamriel, dragons only have two legs, with their wings having claws attached to them. From the World Eater Alduin to your garden-variety drake, a naturally occurring dragon should only have two legs.

In the card art for Elder Scrolls Legends, however, dragons are shown with four legs instead of two. The two particular cards are of Alduin and a Wildfire Dragon, who both have the offending appendages. Along with the two extra limbs, ShiaLePork states the artwork for Alduin looks nothing like “the big guy himself.” Other Elder Scrolls Legends players have complained about Alduin’s questionable card art, with many agreeing with ShiaLePork that the dragon shown on the card is simply not the World Eater.

Four-legged dragons aren’t completely alien to the world of the Elder Scrolls, as the Daedra Peryite “occasionally appears as a four-legged dragon,” but this is just to mock the dragons that already exist within the world.

ShiaLePork rounds off his post by saying he has “nothing but respect for Dire Wolf Digital” and hopes that this polite reminder should result in new artwork that is faithful to Elder Scrolls lore. Dire Wolf have previously altered card art to reflect fan criticism, so let’s hope the dragons of Elder Scrolls Legends will return to their normal two-legged selves soon.