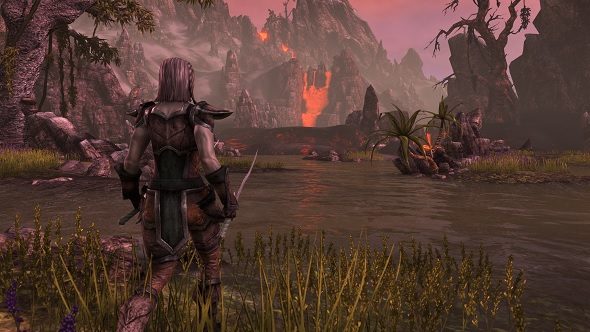 In a post over on r/elderscrollsonline, user FloorBelow has found a map of the main location from The Elder Scrolls III: Morrowind, the volcanic island of Vvardenfell, hidden within the files of The Elder Scrolls Online. Along with the map, FloorBelow was able to find tilesets for Redoran, Vivec, Molag Mar and Hlaalu, as well as Dwemer ruins and Dunmer strongholds.

As you wait for the boat to Vvardenfell, here are some other top PC MMOs.

“The whole area around Red Mountain appears inaccessible, though the northern ashlands around Urshilaku are, along with Molag Amur.” says FloorBelow when breaking down his findings. “Sheogorad looks to be heavily under construction, but that giant wall of rocks makes me think it may be inaccessible as well.” By the looks of it, Vvardenfell will make up the largest PvE area in the whole of ESO, even if the Red Mountain stays as off limits.

If you look carefully at the map, Zenimax Online Studios have even accurately recreated the starting area from Morrowind, Seyda Neen, down to the building layout. With Morrowind’s 15th anniversary coming up in May of this year, it would not be at all surprising if they released this Vvardenfell expansion to celebrate that entry in the series.

You can check out a full, uncompressed version of the Vvardenfell map here and have a glance through the r/elderscrollsonline thread to see various Morrowind fans speculating on what famous landmarks will be returning for ESO. If this turns out to be the next big content update for ESO, I can imagine lots of dyed in the wool Morrowind fans may be taking the trip back to their old haunt.