If there was an underlying problem with The Elder Scrolls Online at launch, it was perhaps too online. Along with that anachronistic name, it took on the traditions of the ‘90s MMORPG and muffled some of the best traits of Bethesda games: a sense of place and permanence.

Read more: the best MMOs on the PC.

In the years since, however, developers ZeniMax Online Studios have worked consistently to shed the strictures of their parent genre.

“We don’t even use the term MMO with The Elder Scrolls Online anymore, because really it’s not,” game director Matt Firor says. “MMO was a term coined in 1997 with Ultima Online, EverQuest, and Dark Age of Camelot – we are not that game.”

ZeniMax dedicated their first 12 months after launch to making the game “feel more like The Elder Scrolls.” They wound up with a world more tactile and reactive – where the thing you touch might be an NPC’s purse, and the reaction might be a cold sword through the guts, courtesy of a player enforcer in ZeniMax’s justice system. 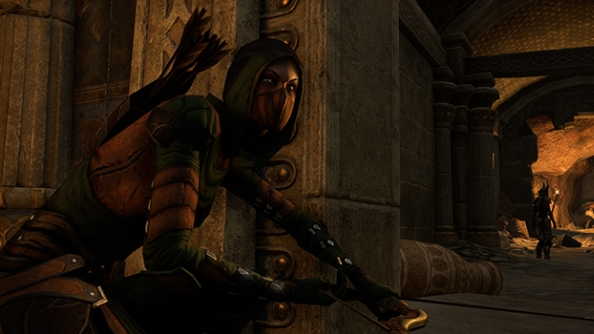 For Firor, though, the most meaningful step forward came last year with One Tamriel. The update stripped levelling of its significance, scaling each character to meet the challenge of the zone they were in.

“We essentially removed levelling from the game,” Firor puts it. “It means that an entry level character and a veteran character can play together, because they are essentially the same level. Now it’s more open and essentially feels like a console RPG. No rigid, enforced systems that get in the way of having fun.”

It’s an encouragingly progressive view of online gaming from a man whose background is in exactly the genre the ZeniMax team have been fighting to escape. This is not the first game with ‘Online’ in the title that Firor has worked on, nor even the third – previously, he held producer and designer roles on Aliens Online, Godzilla Online and Silent Death Online.

But it would be for nothing if Firor and ZeniMax’s lack of concern for MMO convention wasn’t paired with a deep respect for the Elder Scrolls world. That most recently manifested in the enormous Morrowind expansion: one that replicates the “exact footprint” of the Vvardenfell created three Elder Scrolls ago. 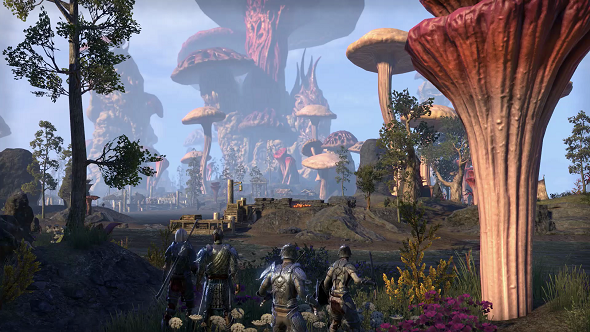 “The towns are in much the same place. There are lots of things you can go to and remember from The Elder Scrolls III,” Firor says. “But since we’re set 700 years in the past and the volcano in the middle of the island hasn’t erupted quite so much, we can really up the plant life and make it a little more alive.”

The game director has a couple of theories about why Morrowind still appeals a decade and a half after its release. One of them is that it took place across a strange beige-scape, a long way away from high fantasy.

Yes, Morrowind’s fungi have lived long in the brains of those who played it. Which leads to Firor’s other theory. For all its difference, Vvardenfell is also comfortably familiar. 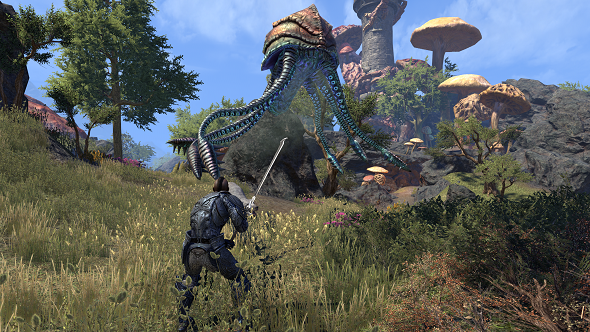 “It’s extremely nostalgic to an entire generation of gamers,” he notes. “The Elder Scrolls has been around since 1994, but Morrowind was the first one on console. It was the first one with a lot of the NPC and conversation systems you know and love. In many ways, Oblivion, Skyrim, and The Elder Scrolls Online are based on ideas that were introduced to the world in Morrowind. It was great for us to be able to tap into that and display it again to a new generation.”

Speaking of new audiences: The Elder Scrolls Online has become quietly huge. It’s an odd thing to say of a triple-A game, but after taking such a critical battering at launch, it’s started to feel like an underground success.

“We’re killing it,” Firor says. “It’s a great, great time for the game.” And again, he puts the credit at the feet of his favourite update.

“One Tamriel allowed players to come back,” Firor expands. “The one critical thing that it did was allow players to get their friends into the game. Guilds can recruit, and everyone can play together. We’re doing fantastically.”