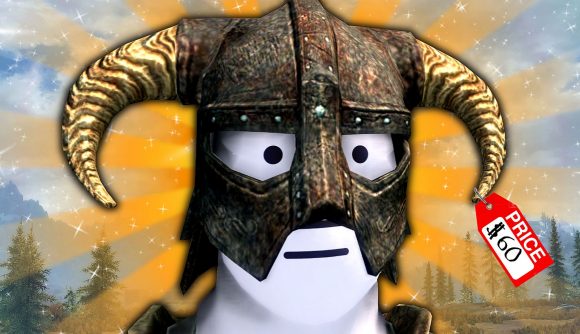 Some on the internet have, by-and-large, moved past anger, bargaining, and depression at the disappointment that is Fallout 76 and entered a stage of grief that Kübler-Ross somehow missed: piss-taking. A new mod for one of Bethesda’s better-received games offers a prime example of this.

Fallout 76 Extra Special Edition is a mod for Skyrim Special Edition that aims to make it more like Bethesda’s attempted MMO, which means making it “incredibly boring”, according to author Inferno Plus (though Jules wasn’t too keen on it either). Laying out his approach in the mod’s intro video, Inferno Plus gets rid of Skyrim’s interesting characters, and replaces them with bland-faced NPCs.

The NPC is also a playable race in character creation, though it starts with poor skills and no ability. You’ll then start the game in a shack underground (like a Fallout vault), hungover from the opening party the night before. Skyrim’s main quest is deleted, replaced by a spunky audiolog that tasks you with finding other players to play with, because “only a total loser would play an MMO by themselves”.

Emerging onto the surface of Skyrim then marks the map with potential followers, all of whom disappoint in various ways.

Read more: refresh your questing with the 100 best Skyrim mods

A bandit by the standing stones swims toward you, apparently suffering from a movement bug. Todd Howard himself makes an appearance, promising “it just works”, but he will explode if you ask for a refund. My personal favourite is xXxQuick[420]ScopexXx, a tryhard in Daedric armour who will call you a “noob” and brag about being “the best at Fortnite” in a prepubescent voice.

We won’t spoil the rest, but you can get a quick taste at ESO’s YouTube channel, where we first stumbled across this mod:

There’s a short story too – a new audiolog at Riverwood tasks you with killing 362 wolves “to prove you’re worthy” of learning the author’s identity. That seems suitably grindy. All told, Inferno Plus promises about two hours’ worth of extra content.

Here’s the mod’s Nexus page, if you fancy having a go. It’s very silly and very much just for fun, but it does look like a pretty creative bit of mockery.