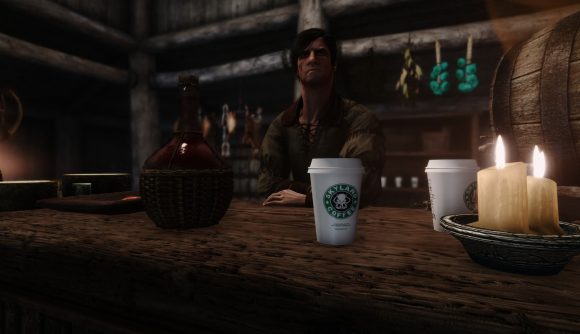 In the wake of the reaction to the most recent episode of Game of Thrones, you might’ve already forgotten about that time a Starbucks cup showed up on Daenerys’s table. (It was like a week ago.) Some Skyrim players have decided we need to bring this anachronism to the frozen north of Tamriel, and thankfully we have the power of Skyrim mods to make that happen.

Over on r/SkyrimMods, Darkmaster06 says “Skyrimmodding gives the best troll mods. We should not stop doing this kind of mod. This is my request: based on the Game of Thrones series, we should add a Starbucks cup to Dragonsreach.” They add that they hope the mods don’t mark the post as a meme, because they actually want the mod to happen.

And, of course, it did. Within hours of the request going live, there were multiple mods bringing the joys of modern espresso to Skyrim. The Mysterious Coffee Cup mod from Sphered places a couple of cups to Dragonsreach – one in the Solitude throne room, and one in the main area of Dragonsreach. You can grab the mod for standard Skyrim at Nexus Mods.

There’s also Skyland Coffee from modder JohnRose81. This one is for SSE, and replaces all the tankards in the land with custom-branded Skyland Coffee. You can also grab this one on Nexus Mods.

Related: There are options if you want a Game of Thrones game

I’ve heard people are asking for mods to Game of Thrones itself these days, but that seems a lot less plausible on the whole. Maybe someday a modder will rebuild Season 8 in Skyrim, but until then, we’ve got Starbucks.