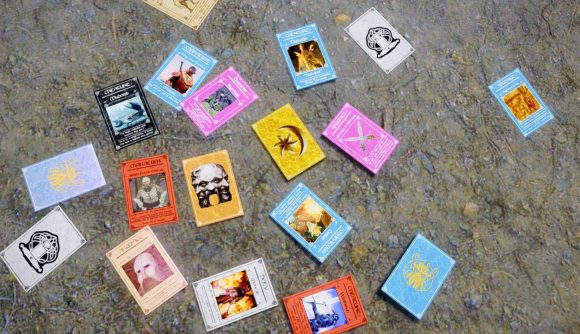 Skyrim has over a hundred in-game books to tell you the stories of its many heroes, nations, gods, and other lore, but settling down for a nice read is a jarring emotional shift when you’re plundering a Dwemer ruin. If only Skyrim served up its lore in a more bite-sized format, eh?

A new mod by FafnirEtherion adds a lot of collectible cards to Skyrim – 170, at the current count – with the goal of teaching you all about the universe of The Elder Scrolls “in a fun and dynamic way”. Each card has a picture, a quote, and a description of what it depicts. They can be found in dungeon loot or at book merchants, or you can loot them from dead bandits, warlocks, and court wizards.

The cards are sorted into six colour-coded flavours related to the content of Skyrim, Oblivion, Morrowind, and their expansions, with three further colours for general Elder Scrolls lore, ‘easter-eggy’ meta content outside of The Elder Scrolls, and great figures of the community – including, perhaps, your own character. Like any good CCG, there are rare and shiny cards, which will also give you skill points when discovered.

You can find The Card Collector here on Nexus Mods. It requires the Dragonborn and Hearthfire DLC, and while the author says it should be compatible with almost everything, it does edit some leveled lists, so you’ll want to set it as early as possible in your load order.

FafnirEtherion is expanding the mod and inviting you to participate. You’re invited to take a screenshot of “just about everything” and send it to them, if you’d like to see it included in the next set of cards. This can even be your own character – just explain their backstory with a short quotation of what they might say, and Fafnir will turn it into a card.