Making its debut in June this year, Tamriel Online is an ambitious mod that aims to bring co-op to Skyrim. In its original form it showed promise, with players being able to explore the cold mountains of Skyrim together. But that’s pretty much all you could do originally, as each player would see different instances of the world, meaning any interaction would only been seen by the player doing the interacting.

The new update aims to change all that… a bit. As well as bug fixing and making gameplay more stable, the latest update adds multiplayer questing.

Whereas load doors often required players to reconnect in the mod’s original form, now co-op partners can enter dungeons and the like together, without the fear of being kicked, mostly. 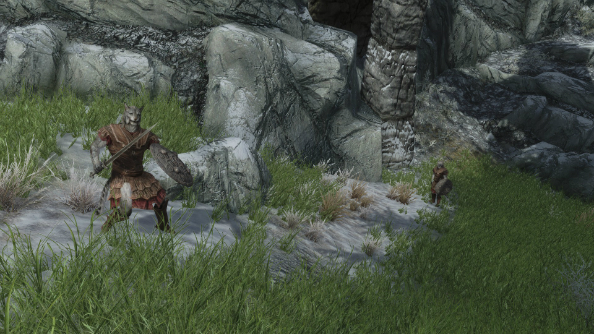 Animations like sitting down, smithing or equipping different armour and weapons are also seamless – and Tamriel Online works with other mods, so you can cosplay as a My Little Pony character until your heart is content.

When it comes to the questing, you can either have the game synced to the host – where only the host’s interactions will have any impact on the world – or have players synced together, which lets both players pick up quests, complete them, use switches and kill enemies.

Though you can now both fight the same enemies, they might appear in different places for each of you, but you can still do damage to the same enemy – it will just look like they died of exposure to the other player. Have a look at the video below and you’ll see what I mean.

Horse exploration and sharing items are also now a thing – you can even stab your friend if they try fob you off with an iron dagger. The next planned update is NPC synchronisation, and if the authors can pull it off, Tamriel Online could be something very special indeed. Check it out on Nexus Mods.