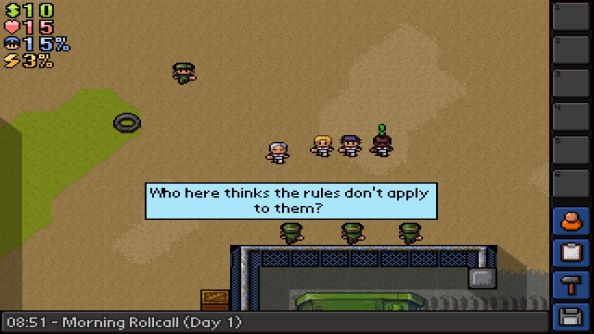 The Escapists has had a fun run of playfully referential DLC, most recently with the shark and supervillain infested Duct Tapes Are Forever. The summer saw the release of Escape Team, a loving A-Team pastiche starring facsimiles of “Hannibal, Face, Mr T and the other guy”, as one astute Steam reviewer puts it. If a more explosive breakout than usual sounds like your sort of thing, head below (taking care to attend to your chores along the way so as not to arouse suspicion).

All you’ll want to do is complete some of the actions suggested to you by our widget. The more you do, such as follow us on Twitter, the better your odds of nabbing an Escape Team code from beneath the watchful eyes of the warden. We do require an email address, but only for the purposes of this giveaway.

The foursome are locked in a military prison (obvs) for crimes they didn’t commit (obvs), and must break out with the help of the fiercest tank in history (obvs). Get to know the corners of the compound quickly enough and you’ll be home in time for T.

Remember to Like us on Facebook for more competitions, and follow Team17 on Twitter for more on the future of The Escapists. The original game is currently on sale on Steam, and there’s a Team17 Weekly Humble Bundle happening in support of Special Effect and Save the Children.