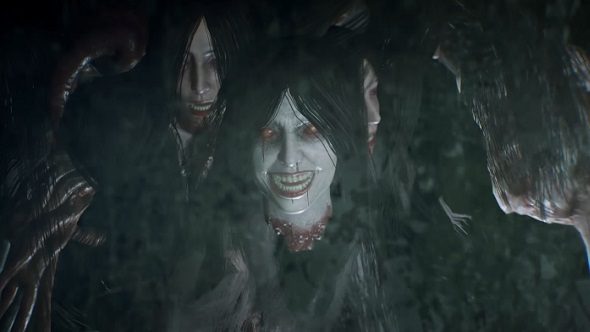 Shinji Mikami knows how to make a bloody terrifying monster. Shown off in The Evil Within 2’s latest trailer, horror fans will soon have the pleasure of being chased by a ten foot, multi-headed monster who giggles as it tries to saw you in half.

Scare yourself silly with these PC horror games.

Named ‘The Guardian’, the horrifying beast has multiple heads, a rusty sawblade for an arm, mutated limbs sprouting from its body, guts hanging from its ribcage, and an incessant need to cackle as it chases after you. The Guardian first pops up to give protagonist Sebastian a bit of a scare as he explores an abandoned abattoir. It’s not a normal abattoir mind you, it’s a reality-bending nightmare abattoir where things blink in and out of existence while lovely things like the Guardian roam about.

The one saving grace is that Sebastian can now run a bit faster than in the first Evil Within, meaning he can outrun the nightmarish creature and escape into a ceiling vent. It doesn’t take long for Old Chuckles to find you again though, sprinting after you as Sebastian darts for the exit of the nightmare world. Based on Mikami’s track record with cold-sweat-inducing monsters like the Regenerator, expect the Guardian to appear later on in The Evil Within 2, now with the ability to instantly teleport to your location and scream in your face.

For those who can’t wait to meet The Evil Within 2’s newest sweetheart, it launches on PC on October 13. Plus, if you want to find out what happens after this scene with The Guardian, read up on our time spent crapping ourselves with the game.