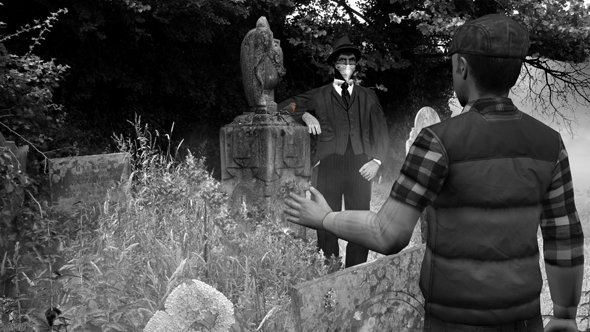 In 2008, Jonathan Boakes turned Polperro – the coastal village he calls home – into a ghost town. Changing its name to Saxton, he layered over it a history of grisly murders, suicides, and missing persons dating back to Saxon settlement in the 5th century. Saxton was the setting for his point-and-click adventure The Lost Crown: A Ghost-Hunting Adventure, a series he’s still adding to today.

A beautiful coastal town, Polperro often bustles with tourists, but in the years following the release of The Lost Crown Boakes began to notice a new strand of tourist – the characters from his games.

“We didn’t expect that,” Boakes tells us. “We’re surprised every time. They don’t just come in summer, it’s winter as well. They never actually contact us to say ‘Oh, we’re in town, would you like to meet up?’.”

Your kind of game? Check out the best adventure games on PC.

As Boakes and fellow developer Matt Clark walk through town they’ll sometimes hear lines from their game being recited by people in The Lost Crown cosplay (which is largely wearing a flat cap and a good winter coat).

“You’ll be walking down the road and you’ll suddenly find a family re-enacting one of the scenes,” Clark says. Boakes admits he’ll try and jump in to finish the line if he can: “A good staple is ‘That’s not right!’, which is a key line from the game.”

Often, people will come up and say hello, but Boakes has also noticed people sneaking photos. “It’s one of those things where you can tell someone is pretending to take a picture of a building as you’re passing, and suddenly…” Boakes mimes swooping round with a camera. “It’ll be like ‘Hello, why are you hiding behind a bin dramatically?’,” Clark adds, laughing.

One of the reasons Polperro is attractive to fans is because of the way it was transformed into Saxton. Rather than inspiring the art style of The Lost Crown, it’s the base for most of the scenes. Boakes creates game environments by layering elements on top of actual photos, videos, and audio recordings he has taken around the town: 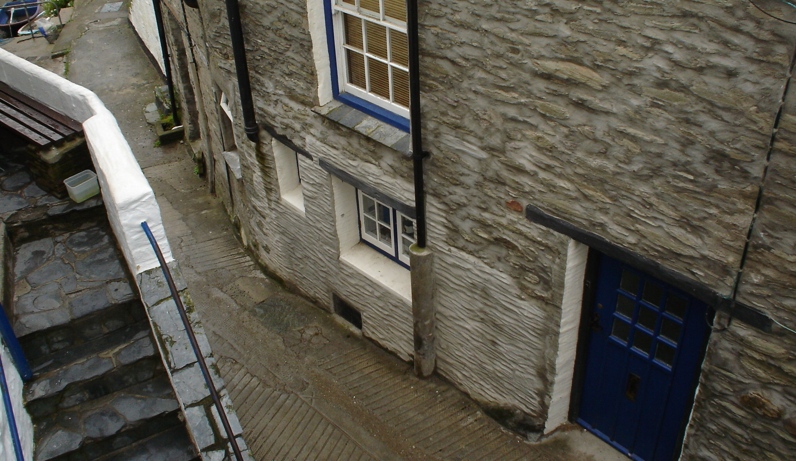 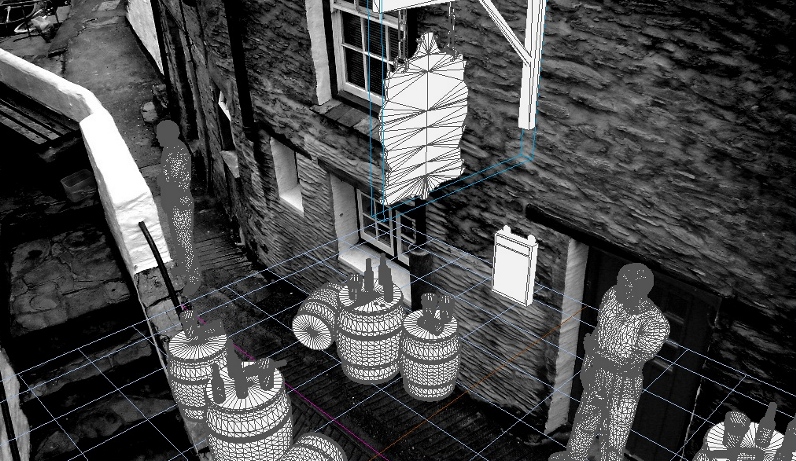 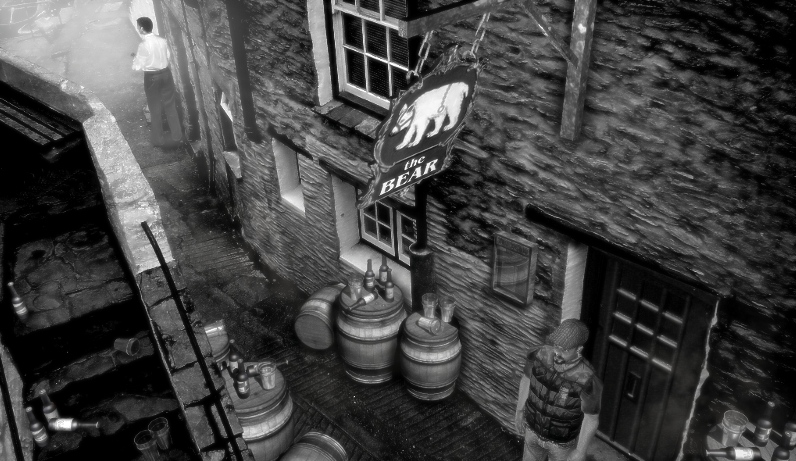 Fans visiting Polperro have taken to trying to track down locations from the game as they explore its narrow streets and alleys. It’s become a game itself.

Boakes has supported this behaviour as best he can. “We did a Google Map recently, pinpointing where all the locations where we filmed are. We’ve seen people going round and looking at all the locations. I think people like the idea of the treasure hunt.”

Polperro isn’t just Saxton to The Lost Crown’s fans, though. It’s had a lasting effect on Boakes and Clark, too. “If ever it’s foggy in Polperro or really miserable I always feel I’m in Saxton rather than Polperro, it’s the effect it has,” Boakes says. “Especially in winter when the place is empty and there’s no-one about. It could easily be a time slip because it’s so distinctive, this little village.”

Looking through the lens of The Lost Crown’s ghost hunters has also changed how its developers perceive the town. “I’ve encountered a few weird things,” Boakes admits. Mind you, Boakes has first-hand experience to draw from.

For research on the first game, he tagged along on some ghost hunts with a local group of investigators. At night, they’d head out to areas with notorious histories, taking with them night-vision cameras and other recording equipment, searching for the paranormal. “I didn’t believe in ghosts when I first started doing The Lost Crown but I do now,” Boakes says.

A lot of those recordings are actually included in the game. “We’ve tried to use stuff that we’ve actually captured,” Clark says. “If it is paranormal, we’ve included the sound files as part of Nigel and Lucy’s own ghost hunting. If we captured anything paranormal then it’s in the game now and we’re spreading it.”

“Some people have reported strange phenomena when they played the first game,” Boakes continues. “The most common one was knocks on the door after midnight and then opening the door to no-one there. Other times it would be something in the loft. They hear taps. Personally, I think when you play something really creepy you hear anything and it will sound paranormal.”

And, admittedly, a lot of this is Boakes invention: “I sometimes put little sounds on the extreme left or right stereo spectrum, so then the player will be [like] ‘What was that?’. Certain sounds work better than others. I find tiny cat meows, put that on extreme stereo and people will be like ‘There’s a cat in the house’.” 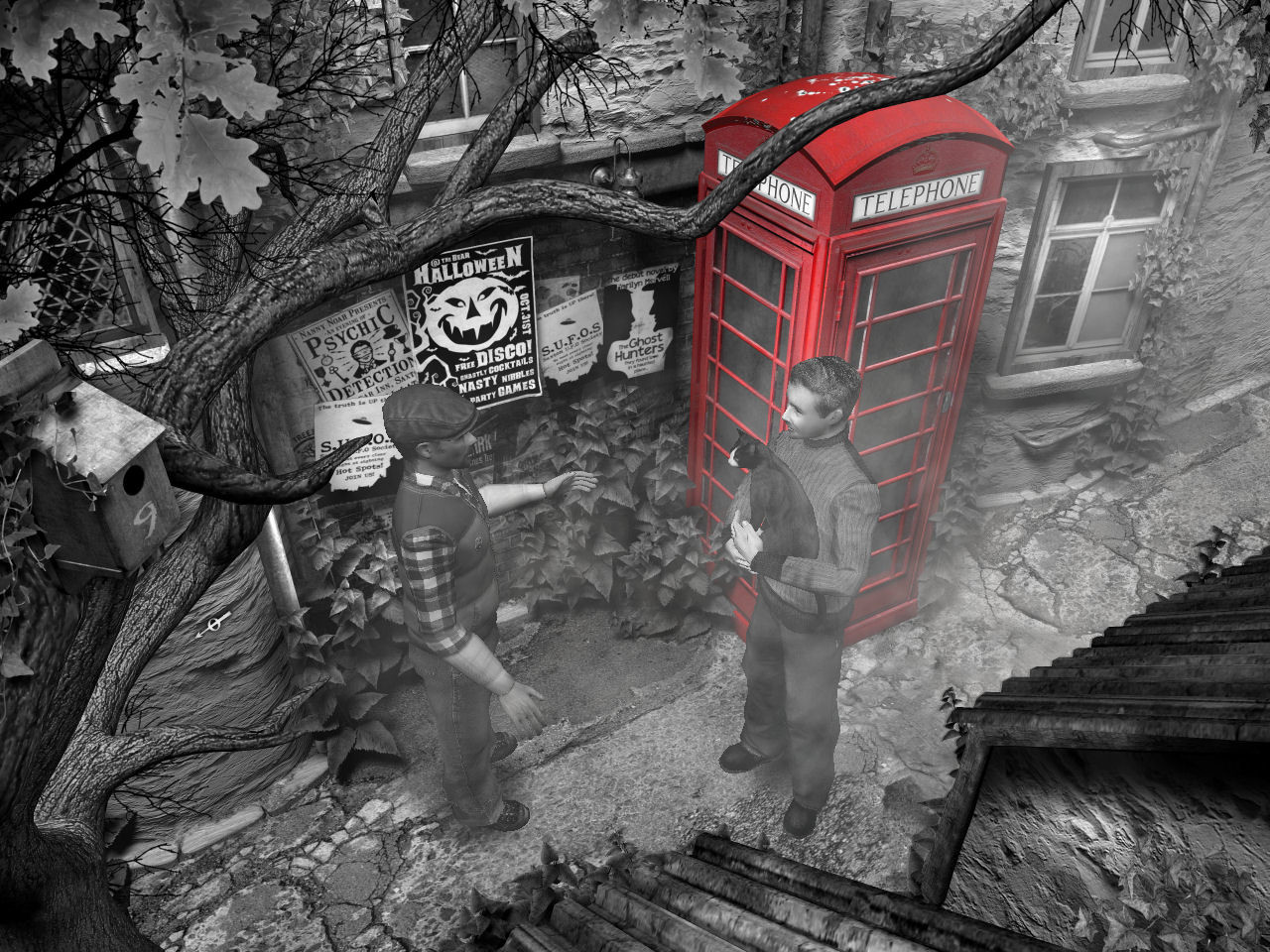 Hearing Boakes and Clark talk about The Lost Crown’s fans it’s clear the pair are touched by the growing community. It’s even had an impact on how they’re designing the latest Lost Crown game, Blackenrock. “We had to keep in mind that people will be turning up to these places,” Clark explains. “So, we had to find accessible, safe places where we weren’t going to [lead people astray].”

Though, it seems consideration of the community has only had a small impact – I ask if there won’t be any cliff edges in the game as a result. “Oh, no, there are plenty of cliff edges,” Clark says. And Boakes is quick to add, “The caves are a tidal cave, so there’s always a chance they might be joining the ghosts.”

Of course, any local deaths only create more material for their next game.