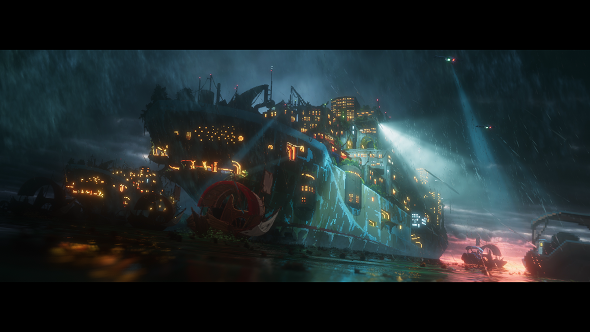 One of the prettiest games to be shown at Microsoft’s E3 2017 press conference was The Last Night, an Xbox One and Window 10 exclusive that’s coming soon.

For some of the best multiplayer games on PC, check out our list of the best options out there.

Developed by Odd Tales, it’s a 2.5D pixel-art cyberpunk game that’s very reminiscent of Blade Runner, with a confident sense of style using the camera for dramatic 2.5D shots, plus those wonderful neon lights that are so prominent in all cyberpunk games.

It promises an open world, with four districts each with their own design. The gameplay itself is a mix of stealth and platforming, avoiding drones, shooting men in hot tubs, and riding futuristic flying cars around town. In the YouTube description, which is all we’ve got to go on right now, branching dialogue is promised, plus a “diverse, inclusive cast of complex character” – hopefully we’ll be seeing some great, unique faces in this world.

Other than the minute-long trailer and its description on YouTube, there’s nothing else to weight the game up with, but hopefully we’ll get more info in the near future. It’s probably a good idea to keep an eye on this one especially with how well it captures its cyberpunk inspirations.