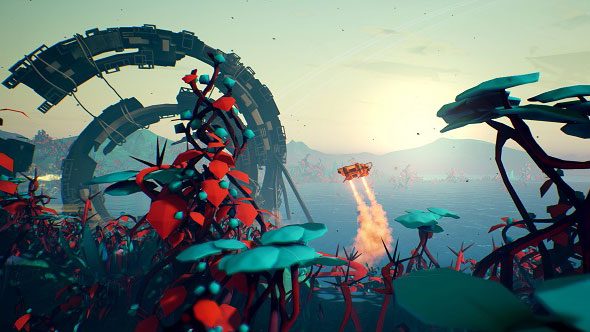 The solar system in which I’ve found myself isn’t a good place, and it’s my own damn fault. The journalist on the computer next to me chose to play The Long Journey Home in ‘Explorer Mode’, and has subsequently been blissfully floating around sensible solar systems with a healthy variety of planets and intriguing aliens to chat and trade with. I, in my hubris, went for the tougher ‘Rogue Mode’, and have just survived a hellish planet only to get stuck in an asteroid belt, where I’m getting smashed around like a crumbling clay pinball.

My first experience of Daedalic’s The Long Journey Home was a gruelling one, but since it’s a procedurally-generated space odyssey game, your first time will inevitably be different, and hopefully less disastrous.

It’s a fascinating game, ticking the boxes of What’s Hot in Games Right Now (namely, space exploration, roguelikes, and procedurally generated planets) while offering its own mechanical and narrative idiosyncrasies. You begin by selecting your spaceship, lander, and a four-person crew whom you recruit from a colourful roster of characters – each with unique abilities, personalities and motives. There were a few negative Nancys in the roster who were apprehensive about meeting aliens or opposed to space exploration. To hell with such namby-pamby attitudes, I thought. I was looking for the space-age equivalent of Victorian writers and pith-helmeted explorers, eager to venture into the Heart of Cosmic Darkness, wrangle and barter with other life-forms, and do whatever extracting necessary to learn about the randomised cosmos that awaits. 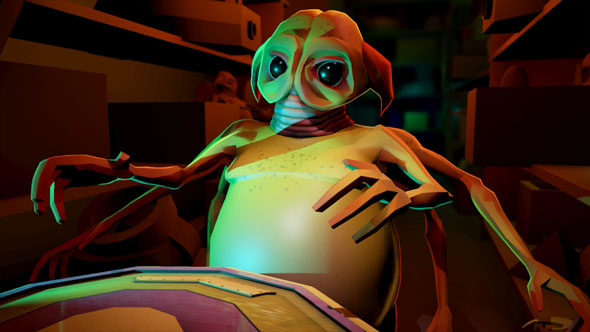 So I settled on a couple of cerebral scientist sorts, a ruthless archaeologist who believed in wanton exploration and extraction of things found on other planets, and Benoit. Benoit’s a bit of a doofus, but a brave doofus, and the guy I’d call on for deadlier missions. Together with this intrepid foursome, I set off into space, with our ultimate goal being to find Alpha Centauri then return back to Earth in a permadeath run that the devs say lasts 4-6 hours.

As I prepared for launch from Earth, I gazed starward and pondered what species and interstellar mysteries awaited me. The moment felt weighty, profound, as the announcer counted down: 3, 2, 1, lift off. Rocket fuel fire and smoke mushroomed around my spaceship, I triggered the thrusters, and… I flew horizontally off the platform. Bollocks. Then I started ramming myself into the side of the platform, eventually wedging myself underneath it. Seeing as these sections are essentially a glorified version of the Atari game Lunar Lander I should really be doing better, and within my in-game fantasy I cringed as I imagined millions at home watching me begin my bold voyage by writhing and whizzing around on the ground like a malfunctioning firework. After about a minute, I finally got a grip, and shakily stumbled towards the stars. 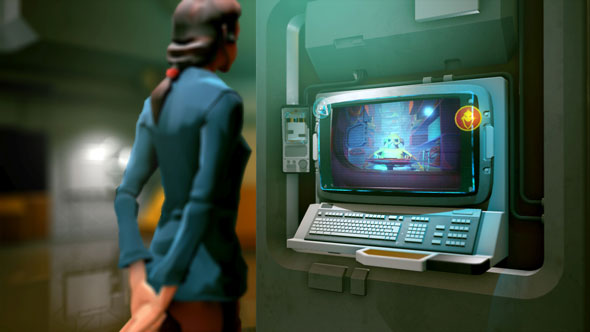 The galaxy/space travel view is minimal, though neatly presented from a flat top-down perspective, showing planetary orbits, the course of your ship and, when you zoom out, all the galaxies procedurally generated for your run. To beam yourself between galaxies, you need antimatter. Before I had the pleasure of heading out into the proc-gen cosmos, I embarked on a practice mission to Mars. The Long Journey Home tries to be faithful to the rules of astronomy while still being fun, so travelling around within galaxies takes into account orbits and gravitational pulls (y’know, physics-y stuff) that you need to carefully thrust yourself into. It takes a little while to get used to (two wasteful trips around the sun and a dangerous detour via Jupiter, in my case), but once you get it, there’s a pleasing elegance to bending the arc denoting your flight path and meticulously adjusting your thrusters to slip into a planet’s or sun’s orbit.

With its light atmosphere and mild weather conditions, Mars was an easy landing, and gave me an opportunity to touch base with my team and familiarise myself with the interface for healing crew members, seeing their thoughts on various subjects (my scientists scoffed at the crystal skull and plant that the archaeologist and Benoit brought along with them), and repairing and upgrading your ship. Once we got these introductory niceties out of the way, I loaded some anti-matter into the engine, and zapped us off into the randomised main component of the game. 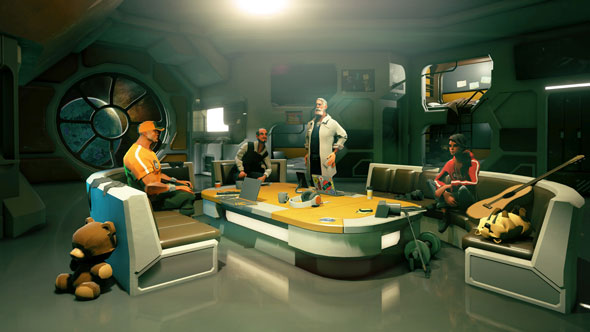 The procedural generation covers planets, climates, events, and which alien races you meet. These races have predetermined personalities and codes of conduct, so there’s one race that refuses to speak to you unless you respectfully disable your spaceship’s shield’s while another will send loan sharks after you if you fall into debt with them. Others still just want to eviscerate you into a thousand fragments floating through the cosmos, so you need to also be combat-ready (sadly, I didn’t get to see any such ‘action’ during my short playtime). Some of these races will have control over certain parts of their given galaxies, requiring some level-headed diplomacy on your part.

Most of the exploration is interplanetary, with planets themselves being largely restricted to the 2D Lunar Lander view, where you thrust yourself across the screen then carefully lower yourself to burrow for resources and precious alien artefacts that can lead you onto secrets deeper in the cosmos. Despite the small scope of exploration once you’re on a planet, the procedural generation throws up some stunning scenery; I witnessed ice-covered lakes stretching out over the horizon, precarious boneyards of colossal primordial beasts that can hopefully get contextualised if you do enough digging, and, on one planet, a towering structure made of massive boulders stacked on top of each other. While the devs aren’t promising endless randomised combinations, those that are there appear deliberate and hand-crafted, deceiving their algorithmic nature.

All of this is embellished by some excellent writing by Richard Cobbett, which describes what happens when the crew disembarks the ship to go exploring. From what I’ve encountered, these are descriptive snippets rather than detailed monologues, but vivid descriptions of such things as a dense forest with trees so rotten that your hands pass straight through the crumbling bark are neatly evocative, as are the oft-whimsical alien encounters, helping you make potentially life-or-death decisions about your course of action.

Much of what I described above was gained from peeking over at the comparatively pleasant experiences of the people playing around me. My own experience led me to the hostile climes of a real bastard of a planet. Because I’d damaged my radar during my clumsy exit from my home solar system, I couldn’t gather any environmental information before descending to said planet. So when my probe began its descent, I could barely engage my thrusters before it was sent hurtling down to the surface by the planet’s extremely dense atmosphere. Benoit the Pilot, the fooI hold responsible for this disaster, thankfully survived, and continued the mission. Once the probe regained its balance, I attempted to find a good spot to drill for resources. As I began hovering however, a violent storm erupted, pirouetting me across the screen. This was the most fiery of baptisms for Benoit, who I was actually starting to feel quite sorry for. 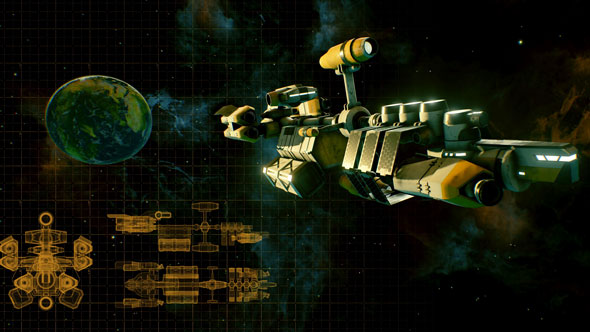 Eventually, we overcame the elements and heaved the probe over to a drilling spot, where I duly extracted aluminium from the ground. All along, however, I failed to keep an eye on my fuel, which was hemorrhaged by the hostile conditions and my over-excited, avaricious drilling. Running out of fuel doesn’t stop the craft moving, but shuts down the life support systems in the lander. Poor Benoit began suffocating. ‘At least he’ll die looking at that pretty stone structure in the distance’, I thought, but what of the aluminium he gathered? I refused to give up, waiting out a storm with the knowledge that expending fuel on powering through it could be the end of Benoit, the aluminium and, most importantly, the lander. When the chance came, I blasted off the god-forsaken rock back to my ship. Benoit survived, despite the crew expressing concerns over his wellbeing, and I patched him up. It’s after this that I made my fateful trip into the asteroid belt I mentioned earlier (a trauma that I don’t care to revisit).

For all its friendly characters, neat interface and colourful writing, The Long Journey Home is a game that’s aware of the horror inherent to space. The music when you’re inching through an asteroid belt or navigating a galaxy is ominous, filled with bassy droning and sounds of muffled storms raging above some hostile planet. At moments, its relationship with space feels similar to Sunless Sea’s thalassophobic relationship to the ocean. Those space-exploratory bits are a nice contrast to the vibrant landscapes of planets, alien meetings and cheery archetypes of your crew members. Space may sometimes be scary in The Long Journey Home, but it’s also filled with life and secrets. It makes me want to discover how deep its rabbit black-hole goes when it releases at the end of the month.