The Occupation takes four hours. That’s not a playthrough estimate: it’s an exact figure. Whoever you are, however you play, The Occupation will always take exactly four hours. Within the walls of the government office building you enter as a whistleblowing journalist on October 24th, 1987, events will play out in real-time. It’s your job to navigate the AI employees attending to their daily business around you and gather evidence. By the end, you’ll have made drastic decisions that will affect the outcome of a controversial civil rights bill on the cusp of being drawn into British law.

Here’s how the makers of Ether One have gone about making this low-key but highly ambitious game. 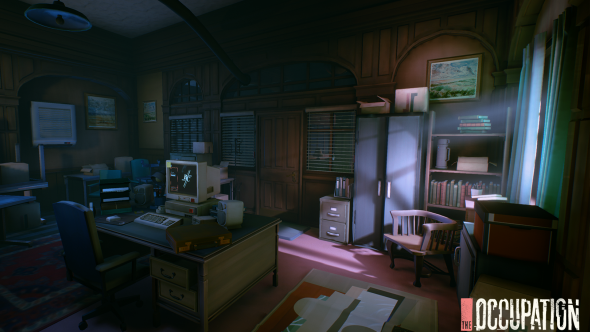 The developers of the Manchester, UK-based White Paper Games are disciples of the immersive sim: the systemic, choice-driven likes of Thief, Deus Ex, and BioShock. They made a pilgrimage to GDC in 2014 to watch Irrational Games give a talk called Creating Elizabeth – or, rather, creating the AI that governs BioShock Infinite’s unique companion character.

“We took the concepts that they used,” White Paper co-founder and designer Pete Bottomley tells us. “They have things called smart terrain objects that they place around the world that Elizabeth knows about and goes towards. She interacts with loads of different things.”

Moreover, Elizabeth has different states of being: happy, emotional, combat-ready.

“All these influenced our approach to AI,” Bottomley says. “Those kind of studios are using Unreal, so we can translate a lot of that stuff through. Creating Elizabeth was our benchmark – if we’re 10% of the way there then cool, we’ve done a good job as a small team.”

To that end, the team have leaned on Unreal Engine 4’s blackboard system. A blackboard is simply a place where an AI’s data for decision-making can be written and read. They’re often used in conjunction with behaviour trees, which is precisely how White Paper have used theirs. 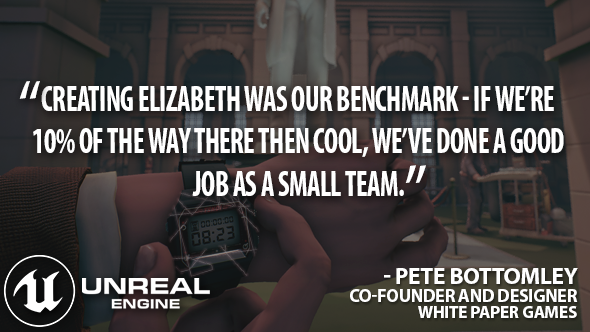 “I’d never done anything like that before, so I was researching AI and how they’re supposed to talk,” Bottomley says. “It took us a while to figure out, between the behaviour trees and the AI logic, where it is that you include a voice line. The behaviour trees are supposed to be high level logic and decision making. It shouldn’t be storing 500 lines of dialogue.”

Growing confidence has seen the team push for the kind of AI that’s important to their systemic, small-scale open-world, however. Since The Occupation plays out in real-time, all of its characters are given time-based tasks to do. Internal logic tells a stressed NPC, for instance, to go outside and take a break, or drink a coffee from the machine. If they do drink a coffee, they may have to use the toilet afterwards. White Paper intend the game’s AI to interact naturally with the world as often as possible – particularly when those interactions can yield exciting gameplay possibilities.

“If they go to the toilet when they should be in the office, that might be an opportunity for the player,” Bottomley notes. “I love the systemic and emergent elements of games like Dishonored, Thief, and Deus Ex. It’s just trying to be inspired by what those triple-A teams are doing. What is our nine-person approach to that? We’re trying to be smart about what our small team can achieve, and push production and interesting AI.” 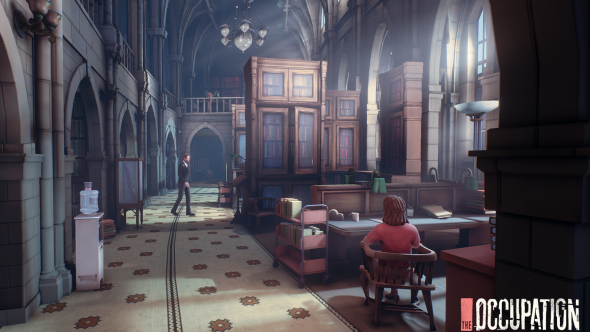 White Paper found that, as their characters pathed their way around The Occupation’s building, the loops and repetition in their animation became obvious. And so they’ve implemented a few ‘loop-breakers’: while characters are walking, they’ll sometimes scratch their pate or itch their arm. They’ve got head-look systems, too, so their eyes follow you around a room you perhaps you shouldn’t be in.

“AI by default goes to a point, stops, and moves to another point,” Bottomley says. “It’s very linear. It’s good for run-and-gun shooters, but for believable AI, we introduced our own curved pathing system, so they know the corners and take them at a curve.”

It’s sufficiently impressive that The Occupation’s debut trailer drew comparison to – guess what? – BioShock Infinite. And all the more impressive when you learn that, where Irrational grew to 150 staff during the course of Infinite’s development, White Paper Games have access to exactly one animator.

“We’re trying to think of the biggest pay-off we can get,” Bottomley explains.

A matter of time 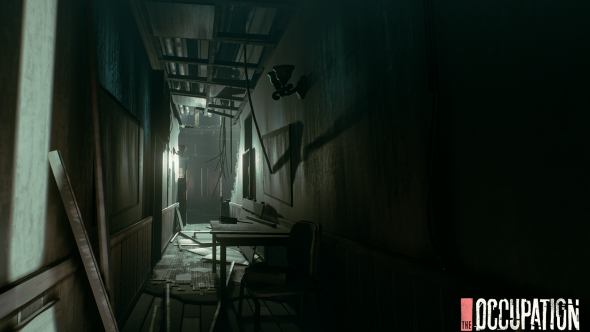 “Everything in the world is based off time,” Bottomley says. “Instead of you hitting a trigger in the world to set off an event, events happen at a certain time.”

Of all The Occupation’s high level systems, however, its real-time conceit is perhaps the simplest. “The level logic is basically: the world knows what time it is,” Bottomley says. “We have an array of strokes which are the timed events. At 10:37 it will fire a custom event called ‘Clock tower rings,’ and the clock goes bong. That’s literally it. It’s the simplest system, but it just works.”

Since the game has a universal world time that’s always ticking onwards, the watch on your wrist and every clock on the wall pull data from that same source. Voila: instant tension in a game where there’s no health bar to lose, nor dwindling ammo in your gun.

“All of that [logic] allows the player to plan their time out,” Bottomley finishes. “Because that’s a big thing in an immersive sim: you’ve got this environment, you’re gonna plan and then execute upon those plans.”

There’s no release date as yet – but White Paper Games appear well on their way to executing theirs.

The Occupation is coming to the PC. Unreal Engine 4 is now free.

In this sponsored series, we’re looking at how game developers are taking advantage of Unreal Engine 4 to create a new generation of PC games. With thanks to Epic Games and White Paper Games.