It’s not easy adapting an epic novel saga to a video-game. Sure, it worked out alright for The Witcher, but with its panoply of swordplay, magic, violence and sex, that was almost destined to succeed. When you’re reimagining The Pillars of the Earth, a 1000-page historical saga revolving around the building of a cathedral in 12th century England, then things get a little more complicated.

The approach of developers Daedalic Entertainment was to turn it into that fondest of PC genres, the point-and-click adventure. And you know what? I’ve played it and the format fits. Maybe there is some life in the genre once championed by Guybrush Threepwood, Sam & Max and co.

With some neat new ideas, Pillars of the Earth could be something of a comeback for the slumbering point-and-click, and I’ll argue my case through that most venerated of writing structures – the list. Here are my thoughts on why I think I think Pillars of the Earth can reinvigorate the genre. Tim Schafer, get your notebook ready…

One hell of a story 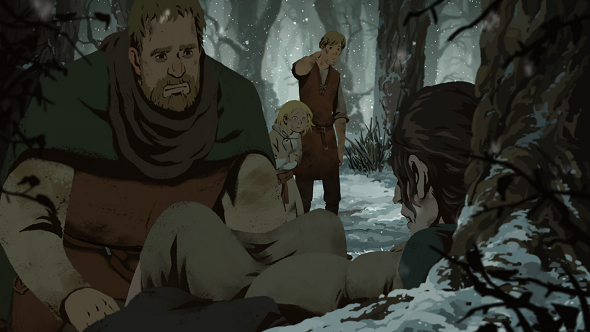 Daedalic told me that their priority is to create a compelling story experience, and they have an instant advantage by basing their game on such excellent source material. Ken Follett’s epic may sound dry when you hear it’s about building a cathedral, but there’s far more to it than just a thousand pages of scaffolding and stonemasonry (though stonemasons do feature heavily).

The story is set in 12th century England against the backdrop of The Anarchy, the 18-year civil war that was triggered by the death of King Henry I, who left no legitimate heir. Earls, pretenders, barons and allsorts were dragged into the snafu, where there was enough conspiring and backstabbing to satiate the most bloodthirsty Game of Thrones fans. Indeed, parts of the hit series were based on events during The Anarchy (see: Purple Wedding and Eustace of Boulogne).

The game follows the same plot as the book, pitting you as six characters throughout the sweeping historical tale. During my segment, I controlled a young Jack Jackson, who starts out as an outlaw living in the wilderness with his mother, and other key playable characters include Prior Philip, a high-standing monk who oversees the building of the cathedral, and Aliena, daughter of a rebellious Earl embroiled in the events of the Anarchy.

It’s all pretty compelling stuff. Now it’s just a small matter of converting it into a good game. How hard can that be, right? 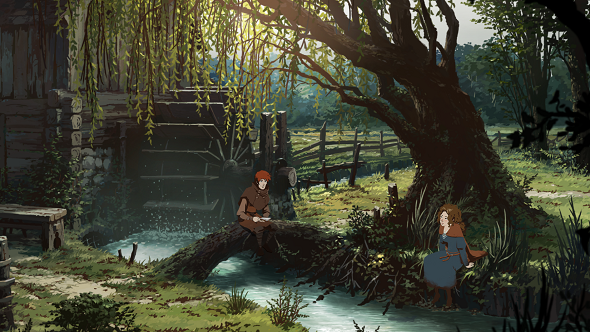 Something that made the point-and-click adventures of the early 90s so vivacious was the way you could interact with the backgrounds. Even though they were only lightly animated, the fact that the protagonist would have a comment or thought on just about anything you wished to right-click was a great way of making you engage with your environment, turning flat backdrops into a savvy means of world-building.

More recent entrants to the adventure genre, like Broken Age and Telltale’s various series, have largely abandoned this lost art, but Pillars of the Earth resurrects it. You can right-click bits of the background to get a character’s thoughts on it in the form of a short piece of text, with multiple clicks on the same thing often giving more insights. It offers fast, instant information from the character’s perspective – whether it’s that you need to cure a cut of meat before it spoils, or expressing concern over why Jack’s mother’s been out so long. It makes these gorgeous backgrounds more than just pretty wallpaper. On that note… 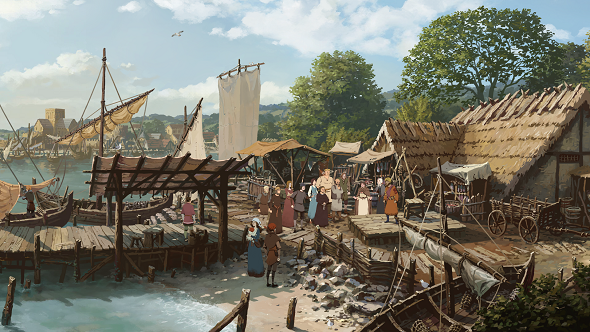 The 2D hand-painted art style is beautiful. The sallow, tight faces of characters are filled with nuanced expressions, small eyebrow movements, and, during my play-time, a deep-seated sadness that I imagine is the default state of being in England during this time period (the part I played was when Jack discovers the body of Tom Builder’s wife in the woods, after she died during labour, so not much to smile about).

The backgrounds, meanwhile, are all muted, earthy colours and rich depth, making me want to hang out in every scene just to enjoy their fine painterly detail. Scenes aren’t always restricted to the one screen, so in some of them you can move all the way to the left or right to see more of the same vignette. During one scene, when I was playing as Jack and facing a tense situation with Tom’s dickish son, Albert, the fog in the background slowly cleared to reveal the head of a dead moose that got trapped in the ice. So even with ostensibly static backgrounds, there’s a lot more scope for developers to bring them to life than there was in olden times. Daedalic look to be taking advantage of that, and hopefully have plenty more VFX tricks that will bring the backgrounds to life. 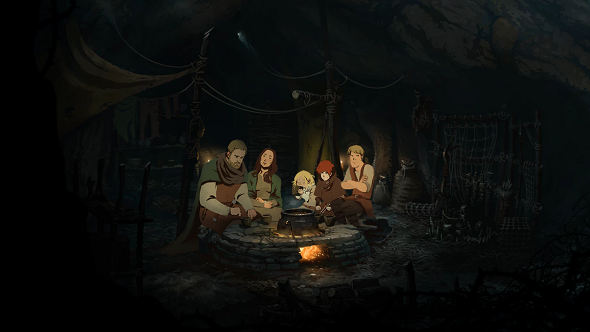 There’s a big difference between choice and meaningful choice, and too often do game falsely claim to offer the latter (here’s looking at you, Telltale Games). Proper player agency, allowing your decisions to affect the story, has rarely been seen in the traditional point-and-click, so it’s good to see Daedalic taking this forward step (honourable nods to Indiana Jones and the Fate of Atlantis and Blade Runner here, which actually did a great job of offering choice in their time).

In Pillars of the Earth, your decisions can be a matter of life and death, and certain scenes and situations will and will not occur depending on the choices you make. Along with altering crucial story events, your choices impact the world in more subtle ways. For example, as Prior Philip, you can get your brother imprisoned if you make a certain key decision, at which point you’ll stop receiving letters from him, implying that you got the poor sod into some serious pigshit.

I didn’t get to decide on who lived or died unfortunately, but I did get to choose whether to serve soup to Albert or his sweet, famished younger sister first. Seeing as Albert quite possibly tried to murder me earlier, I served her first, but did offer him some eventually, in the hope that he would soften up. He didn’t, the ungrateful twot, though I’m told you can befriend him if you make enough effort. After that frosty faux-pas, I’m not sure I’m willing to put myself out like that… 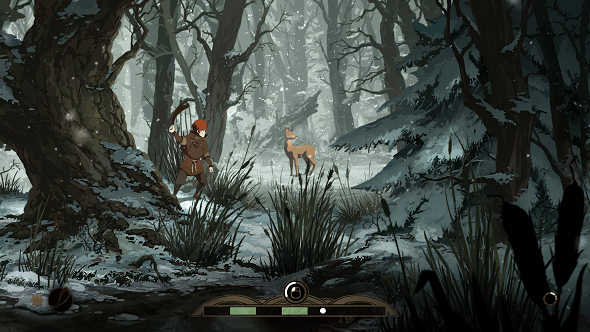 The jarring juxtaposition between the excellent writing of classic point-and-click games and their god-awful abstruse puzzles has been well documented. The amount of hours I wasted not realising I just had to run past that damn goat in Broken Sword… ergh. But let’s not linger on that, because mercifully there’s none of it in Pillars of the Earth. Daedalus stress that this is a story-led game, and didn’t want to break it up with contrived puzzle-solving just to protract the experience.

That’s not to say that there are no puzzles at all, and when the narrative calls for it you might need to whack on the old thinking cap or reflex glove. During my session I had a couple of unintrusive quick-time events to contend with. Playing as Jack, I hunted a deer with my slingshot and tried to sneak up on Albert to get Jack’s book back, both of which required well-timed mouse clicks. It’s simple, sure, but immediately understandable and not obstructing the narrative like point-and-click puzzles used to. There’ll need to be more mechanically diverse stuff than just this to keep things interesting, but I understand that we’ll see more puzzle-based challenges on in the game too. And they won’t involve goats, as far as I’m aware…