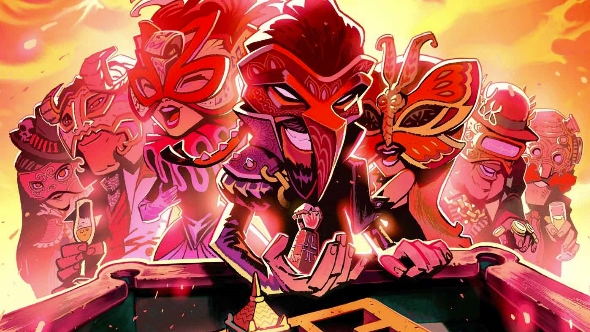 The Sexy Brutale is not, as the title would suggest, sexy. Nor is it brutal. At least not in the post-Hotline Miami world. What it is is an astonishingly charming and intricately detailed adventure game that traps you in an endlessly looping masquerade ball. It’s Groundhog Day: The Videogame, and it’s exactly as exciting as its premise sounds. In fact, it was the most intriguing game shown at Gamescom 2016.

Looking for a great time right now? Try one of the best games on PC.

This new spin on the time loop story comes from Cavalier Game Studios, founded by ex-Lionhead staff Tom Landsdale and Charles and James Griffiths. Starting out with a prototype, they caught the eyes of Tequila Works, with whom they joined forces in order to expand the scope of the game into the wonderfully twisty Metroidvania puzzle it is today.

The game is astonishingly complex; an interwoven series of simultaneous puzzles set during an endlessly occurring party, flavoured with stealth and a healthy dose of the occult. As Lafcadio Boon, an elderly priest who finds himself at the cursed masquerade ball, you’ll need to solve the murders of guests in order to break the time loop. To do so involves exploring the deepest depths of The Sexy Brutale itself; a casino mansion styled like the British Moulin Rouge.

“Your role is to move around the mansion, observe and spy on all the different characters, find out exactly what’s happening to them, find out how they’re going to be killed, and then figure out what you’re going to do to save them,” explains design director Charles Griffiths.

It’s a simple idea, but the Groundhog Day-style time loop introduces a huge amount of design challenges that Cavalier have had great fun creating gameplay solutions to. “We’ve tried to take an idea that people like, the loop in time thing, and get rid of all the stuff that is not so great, such as the waiting around and having to remember loads of stuff,” says Griffiths.

Then there’s the ability to layer puzzles on top and even between each other, thanks to your ability to endlessly replay sections: “The fact that a character gets shot at 3:45pm is key to lots of the other stories. When they’re getting shot, on the other side of the house there are different people hearing that, saying ‘What the hell’s that?’ It’s part of their story. That’s the thing that makes it different: the first puzzle is still deeply related to the very last puzzle in the game,” Griffiths explains.

It’s an incredibly complicated system to get your head around, but when you start playing the cogs fit neatly into place. Lansdale and Griffiths show me the first puzzle in the game, which involves preventing clockmaker Reginald Sixpence from being assassinated by a sharpshooter in the mansion’s chapel. Waking up at noon, you’re able to explore the mansion until midnight at your own leisure before the time loop resets. The only thing you’re prevented from doing is actually interacting with the guests. 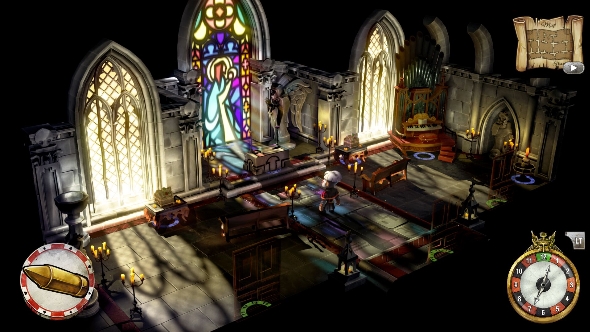 “The masks that the characters are wearing are part of what’s keeping them unaware that they are trapped in a Groundhog Day,” reveals Griffiths. “The house itself, through the masks, attacks you if you get too near.” This stops players from simply interrupting murders directly, demanding they solve puzzles through a combination of stealthy observation and sneaky intervention.

As the day goes on -taking just nine minutes in real time – you can see events unfold by watching from afar, peering through keyholes, or hiding in wardrobes. A softly-softly approach sees our priest follow Sixpence around the house, observing him investigate a safe from which a tiny brass object falls, and eventually meeting his demise at the altar.

As priest Boon explores the house elements are added to the game’s four-dimensional map; a kind of combination journal and room plan. A scrollable timeline displays the state of the mansion at any time between midday and midnight. As you scroll you can see the changing locations of characters plotted on the mansion’s room plan, almost in the style of Harry Potter’s Marauder’s Map. Events are plotted on the map as you witness them, so you can quickly see where there are gaps in your knowledge. Simply repeat the day over and over until your current target’s movements are completely mapped. 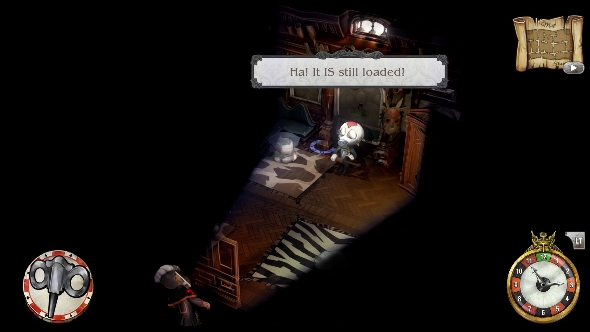 Of course, in a murder mystery the victim is only one half of the story. The priest changes focus to the murderer, finding a member of the mansion’s staff who unlocks a rifle from a wall cabinet and then proceeds to murder Sixpence with it. So there’s a murder weapon. Just need to get rid of it, right?

Not so easy. Lafcadio Boon is elderly and hasn’t the strength to pull the gun from its metal braces. The rifle’s breech is exposed though. Checking the map, Boon can see that Sixpence looked through a safe earlier in the day and a small brass item fell out. He heads to the room after the safe has been opened and investigate the fallen item. It’s an empty bullet cartridge. Winner. With the blank in the rifle’s chamber, the assassination attempt fails. Sixpence is able to escape his fate… although only for today.

You see, the murder is doomed to repeat again and again. Saving Sixpence wasn’t the aim of this little bit of heroics: it’s his mask we’re after.

Each occult mask in the game can bestow you with magical powers; abilities that can help solve the other murders. Collect all the masks of all the victims, and the time loop can be broken. That’s the goal. 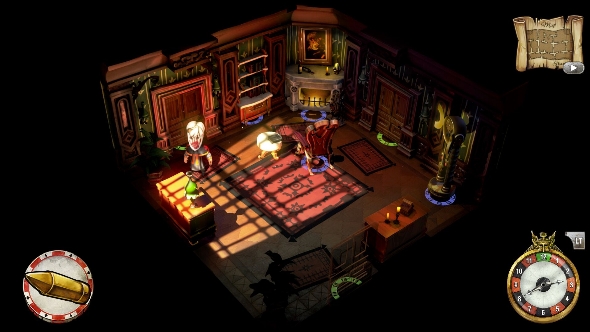 Sixpence’s mask allows you to sync with the grandfather clocks in the mansion, and these work as places you can start a new day from. But other masks provide skills that help you make sense of things you’ve already seen. “You may wake up in the middle of the house and there are characters nearby having a whispered conversation. So you can look at them and see what they’re doing but not hear what they’re saying. Later on one of the powers you get allows you to hear any small noises across the house. So now you can look back at that conversation,” says Griffiths. “Maybe that you won’t be able to save those characters yet, but you’re starting to unlock parts of their story and puzzle.”

And that’s where the Metroidvania aspects lie: as you further explore the house, you’ll encounter puzzles that just don’t make sense yet. Then a new power will allow you to make half-sense of them, and a second or third new ability will finally be the key. It’s the combination of your occult magic and the evidence you accrue on your 4D map that will lead you to the solutions to these intricate, beautifully layered puzzles.

Cavalier are excited about what their endlessly looping mansion means for players. “A lot of the fun of it is that people will experience everything in a different order. Some people will go into a different part of the mansion at eight o’clock in the evening and see the end of someone’s story, yet someone else may go in and see the very beginning. Everyone gets to experience it in their own way,” enthuses Griffiths.

I share his enthusiasm and excitement; I can’t wait to see what stories The Sexy Brutale hides, and to compare the way I discover them with other players. It’s an exciting, ambitious spin on classic adventure gaming, and I think it’s going to work just beautifully.