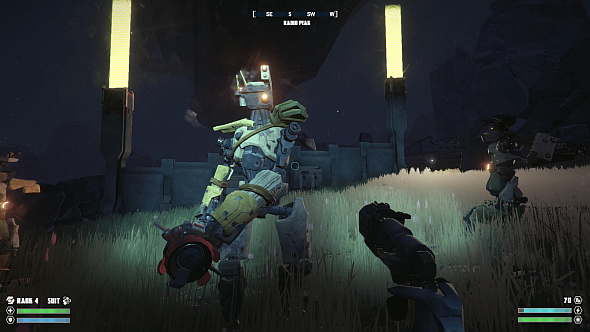 The Signal From Tölva, a sci-fi open-world shooter by the people who gave us Sir, You Are Being Hunted, is due for release on April 10 – that’s just two weeks’ time. To celebrate, developers Bad Robot have dropped a new trailer.

Do open worlds and emergent gameplay butter your parsnips? Then you’ll love the best sandbox games on PC.

With a plot and an art style ripped from the pages of classic ‘70s science fiction, The Signal From Tölva sees several robotic factions hunting down the source of the mysterious titular signal. Yes, obviously it’s from the planet Tölva – a distant world haunted by ancient machines – but where specifically? And will the trail lead to enlightenment, or something more sinister?

It sounds like quite a departure from Sir, You Are Being Hunted. Expect to blow up your robot rivals with laser weapons, or to hack them and turn them to your side. Big Robot promise you’ll contend with “dynamic and ferocious AI” in an ongoing turf war, or with “savage defence systems” as you inch closer to solving the mystery of The Signal From Tölva.

Sound good? Here’s the Steam page, where lurk more trailers and screenshots to snare your interest. No price yet.