The idea of returning to education fills me with the type of dread that has you waking up in a cold sweat in the middle of the night, muttering about the horrors of student loan debt and whatever heinous culinary sin your housemate has decided to whip up in the kitchen at 2am.

The Sims 4: Discover University aims to give players an authentic higher education experience, for better and worse. It’s a huge step up from the equivalent University Life expansion for The Sims 3, and as much as I loved the magical elements of Realm of Magic, Discover University offers the best quality of life enhancements to The Sims 4 since Seasons.

Flexibility is at the core of most gameplay decisions for Discover University. There are two universities to choose from; the Ivy league-esque University of Britechester, which specialises in creative arts and the humanities, or the more modern Foxbury Institute, which offers degrees in the STEM subjects and uh, villainy? If you’re like me, the choice can also be boiled down very simply to: Britechester has ghosts, while Foxbury has robots. Do I want to be spooked as I’m pulling an all-nighter for my coursework? No thank you.

Any Sim that’s a young adult or older can apply for university, so worry not if you feared that your elder Sims would miss the chance to indulge in a few semesters of hedonism – all secondary to the pursuit of knowledge, of course. Unfortunately, my poor Sim didn’t have the skills necessary to get accepted into either university (too busy casting spells to turn Sims into gnomes, I assume), and with almost zero savings to her name, she’d also need to bank several scholarships to afford a degree. There’s also an option to take out student loans, but on principle I refused to entertain that notion. It’s a full free ride or nothing. 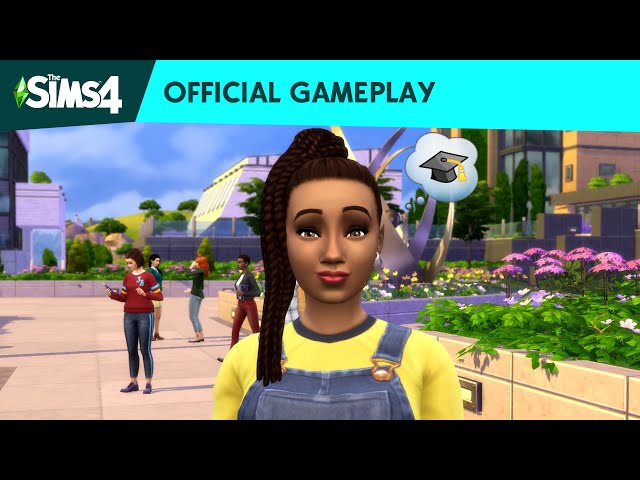 Honing my Sim’s skills takes several hours of my real-life time – time I could’ve probably spent improving my actual real-life skills as well (like how I keep promising myself I’ll learn the ukulele one day…). Nevertheless, my Sim eventually submits a successful university application on her third try, opting to major in a distinguished degree in Computer Science at Foxbury (not that I’m bragging or anything), and picking up scholarships for being in a low-income household, having an already established career, and two skill-based scholarships for cooking and videogames. Whoever said playing games gets you nowhere clearly hasn’t seen my in-game esports scholarship.

Degrees come in two forms: regular and distinguished. Foxbury offers distinguished degrees in tech and science subjects, and Britechester offers the same for the arts and humanities. Distinguished degrees are naturally harder to get into, but regular degrees can have just as much merit if you work hard enough and graduate with honours. 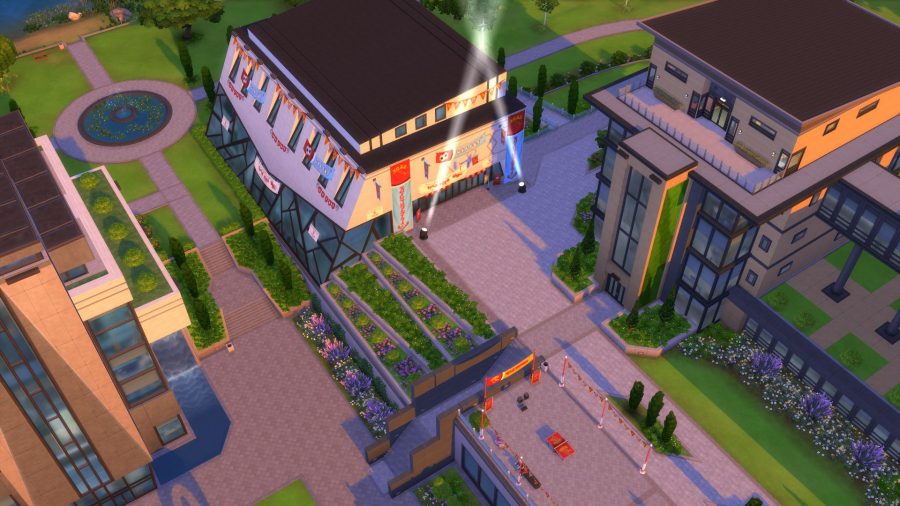 To graduate in Discover University, you must complete a total of 12 course credits, with up to four credits available per term. Each term lasts one week, during which time you’ll have plenty of classes to attend. Again, there’s a lot of flexibility in how you live and study, and how difficult you want to make the experience. Taking the maximum possible credits each term means your time in university will be over before you know it, and you’ll be precariously trying to balance your Sim’s needs with their study schedule, but it’s definitely the cheaper option overall. Take fewer classes each term, however, and you’ll have more time for socialising, part-time jobs, and secret societies.

Much as I envy my housemate's power to nap anywhere, he definitely got kicked out last semester

Sims can also choose to move into dorms or on-campus housing in the new world of Britechester, among picturesque neighborhoods that remind me of places like Dartmouth and Cambridge, or stay off-campus and commute to lectures. Britechester is admittedly a little lacking in empty or buildable lots for Sims to move into, but that’s because the new co-ed dorms are billed as its main attraction, and you can see why. They’re fantastic venues for Sims to experience hilarious and borderline nonsensical life stories, which really is The Sims doing what it does best. 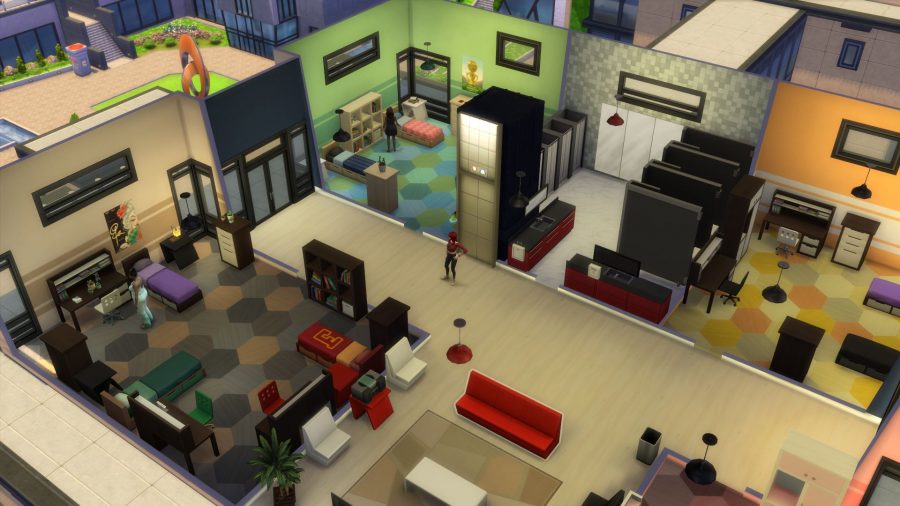 After moving my Sim into her new dorm at Foxbury, I can immediately tell that her housemates are a peculiar bunch. One routinely breaks most of our appliances, only for her temper to flare when someone else (usually my Sim) repairs them and leaves the debris on the floor (cleaning is not her strong suit). Another girl seems to have an inexhaustible supply of cooked rotisserie chicken, and while I can’t for the life of me figure out where she’s getting it all from, it’s also the only thing keeping my Sim relatively well fed. A guy in our dorm is also a narcolept, nodding off on just about every available surface, including the floor. Much as I envy his amazing power to nap at the drop of a hat, he definitely got kicked out of university last semester and has just been hanging around ever since.

The first term at Foxbury is a glorious mess. Underestimating the workload, I sign up for four credits, and nab a spot on the university’s esports team. What ensues is probably a more accurate re-enactment of my actual time at university than I’d like to admit. Frantic studying in the early hours of the morning, unfinished homework abandoned as my Sim runs to class, and half-disdainful, half-pitying messages from lecturers telling me to step up my game. 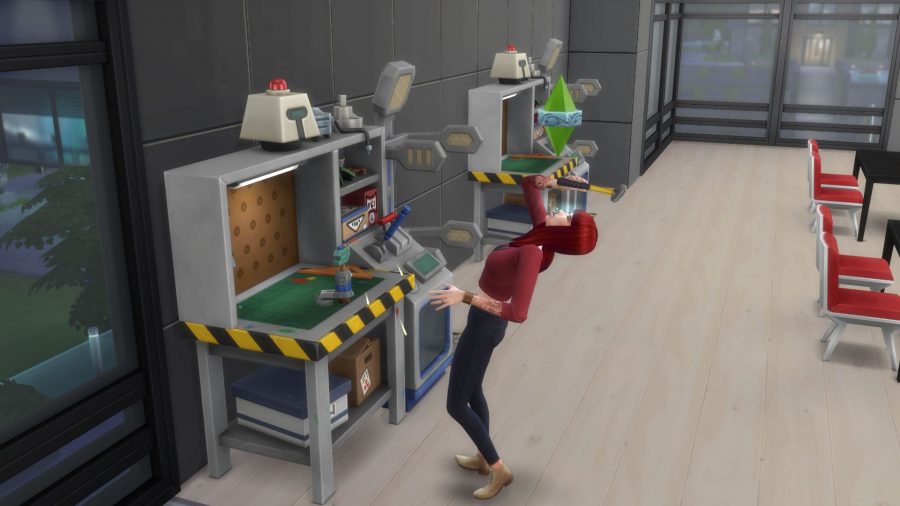 Trying to balance a semblance of a social life alongside all the course commitments and my nightly esports scrims feels impossible. My Sim becomes a total recluse as, only two days into term, I scramble to rescue her already floundering grades. Between completing each course’s daily tasks – typically a piece of homework – on top of attending classes and studying for each term’s finals, everything but school work falls to the wayside.

Day five is a particular low point, as my Sim doesn’t have enough time to shower before one of those finals, causing visible stink fumes to attend along with her. Coupled with the pre-exam burps brought on by nerves, it’s fair to say that everyone in that exam hall was visibly repulsed by her presence, and my Sim finishes the semester with a thoroughly mediocre grade.

I’m determined to bring her back from the brink of academic failure in the remaining terms, so I halve my Sim’s classes, and finally find time to indulge in a few extracurricular activities. She throws an admittedly terrible keg party in the dorm, but it’s a party nonetheless! We also get up to some vintage academic mischief by defacing the University of Britechester statue with Foxbury banners and toilet paper, causing the two institutes’ mascots to roughhouse outside the lecture halls the next morning. Finally, in an act of true youthful rebellion, my Sim gets some facial piercings and some new tattoos, but balances it out by taking on the responsibility of cooking for herself – which means instant noodles and pizza rolls for nearly every meal. Baby steps. 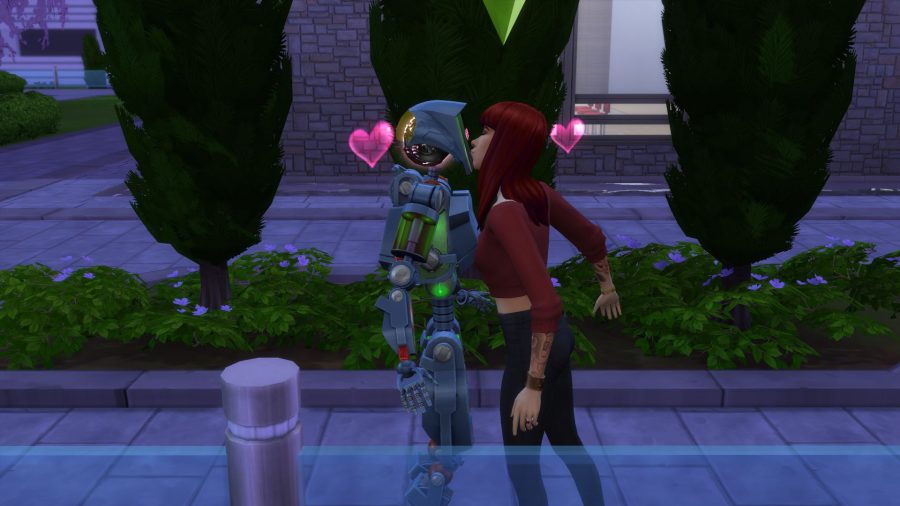 Now that my Sim is practically drowning in free time, she can also finally focus on her budding esports career, and is eventually promoted to captain despite the team failing to win a single match throughout my university career.

And what of campus romance? Somewhat unconventionally, my Sim falls in love with Foxbury’s resident robot Mach, putting those robotics course credits to good use. Their relationship is surprisingly adorable, if tested by Mach’s habit of breaking down at a moment’s notice, obliging my Sim to quite literally rebuild him. Such incidents have occurred on: their first date, during a game of beer pong, during WooHoo in the shower (definitely should have anticipated that one), during a very important presentation my Sim was giving, and lastly, during my Sim’s graduation.

At its core, The Sims 4: Discover University is a fantastic setting for storytelling – something that has been tried in previous expansions, but rarely so successfully as in this one. I could’ve written at least half a dozen more anecdotes about my Sim’s bright college days, which speaks volumes about how effective this setting is in delivering on the core Sims experience. University adds a whole new stage of life for your virtual people, and it’s a complete and comprehensive one to boot, with enough tools and freedom of choice to ensure that no two Sims will share the same college story.