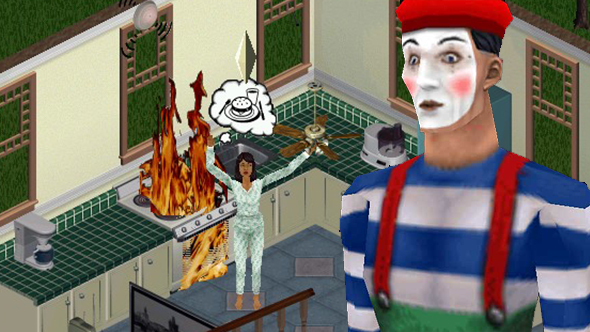 The Sims have been defined by their trademark gibberish language since becoming stars in 2000, and the popularity of the life simulator certainly owes a bit to the vibrant personality of its stars. How did Maxis manage to make a cast speaking exclusively in Simlish so endearing? The answer, of course, is mimes.

Make some magic and live large with the best sandbox games on PC.

Using actual speech for a game that would be localised into roughly 30 different languages would have been impractical. Simlish was born, but that didn’t entirely solve the problem of how the Sims would express themselves. “I went to the theatre one night and they had these two amazing mimes and we were just – I laughed so hard, I was hoarse the next day.

“We have got to get these people to come in and we’ve got to hire them because we need mimes. We need them to be able to give us stuff, so we brought them in – which was so cool – and we filmed them for several days. Giving them all these different emotions and everything.”

Animator Eric Hedman says “at the time we were doing original animation a bunch of people in that design cadre went and saw a show of mime performers, who are who were at that time known as the ‘New Vaudevillians.’ One of them was David Shiner. We went through talks with him to record him going through our basic animation set with our character limitation for expression placed on them.

“He did a lot of things that we were already doing, and we learned a little bit about how much we can read as human beings from far away because we are human and an innate part of our brains can read very subtle things from very far away. It was nice to know you were going in the right direction and Roxy’s fire about getting to work with Mr. Shiner definitely helped a lot.”

Shiner (who you can find in the special thanks of the original credits) was joined by Bill Irwin in serving as the human backbone for Sims animations. You may recognize Irwin in particular for roles in the live-action Grinch and Legion, as well as puppeteering and voice credits from Interstellar. Hedman also says that Bob King came over to the Sims team after work on the ill-fated SimMars ended, and that his help on animation “was a godsend.”

So next time you see a Sim do something comical or endearing, spare a thought for the mimes who helped to determine those personalities. (Try to avoid thinking about Gabby, though.)