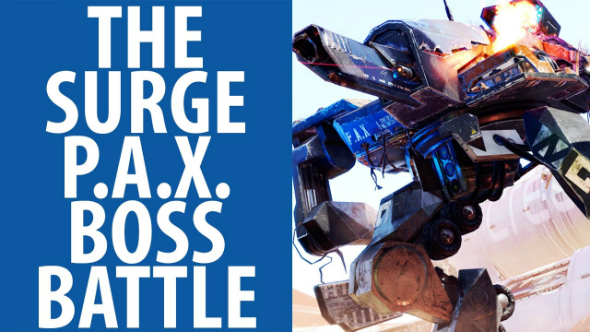 Just rinsed the latest slice of tough-as-nails DLC for Dark Souls III and searching frantically for the next punishing boss encounter? It might not have Miyazaki at the helm, but Deck 13’s The Surge is shaping up quite nicely if you’re into your brutal action-RPGs. We’ve been playing through the preview build of the game to put the combat through its paces and see how it stacks up compared to that esteemed franchise and its precursor Lords of the Fallen. That preview build finished with the game’s first boss battle, against a gigantic mech called P.A.X. that has swords for arms.

Want to know how the fights are in the science fiction Souls-like? We’ve got a combat primer for The Surge for you to check out.

If this initial encounter is anything to go by, then the boss fights in The Surge are much better than those of Lords of the Fallen. It’s also got a very promising and interesting ending sequence that has us excited to see what the game’s other bosses have in store for us. Is it as good as a Souls boss battle? Not quite, but nothing in life will ever top seeing ‘YOU DEFEATED’ appear on screen after losing untold hours and thousands upon thousands of Souls to Bed of Chaos, Ornstein and Smough, or the Four kings.

For more PC gaming-related videos, be sure to subscribe to PCGamesN on YouTube. We’ll try not to let you down – that’s a promise.