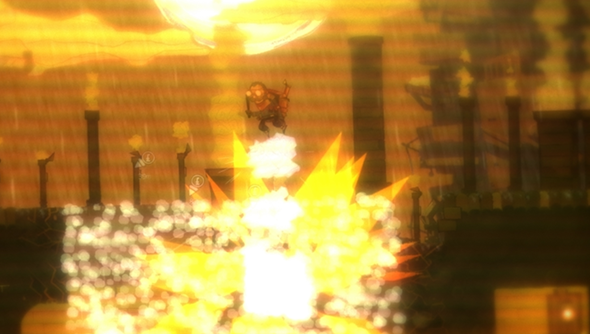 The Swindle is a two-dee platformer that’s all about breaking into buildings and taking thing that aren’t yours. It has the same spirit of repeatedly throwing yourself into procedurally generated adventures as Rogue Legacy, the same tension-ratcheting permadeath stakes as Spelunky, and the same smashing through plate glass windows as Gunpoint. It has all of these things plus wall-jumping and funny little robot guards.

Here’s what I thought about it when I played it earlier in the year. Since then I’ve spoken to developer Dan Marshall about his reasons for reviving the Victorian-era burglary capers, how the procedural magic works and how to program a guard’s steampunk-brained AI.

PCGamesN: Why did you decide to revive The Swindle?

Dan Marshall: It’s one of those games that I’ve kind of wanted to make for years. Back when I was messing around in Klik n Play as a kid I’d put together this clunky little thing called Imperium Britannica which was kind of a similar concept. It was more cyberpunky, but it was a 2D platformer about breaking into buildings. Jesus I’m a sociopath. I’m obsessed with stealing things that don’t belong to me, what’s wrong with me?

Anyway, after Privates was done I thought back to that game and how cool the idea was, so played about with that. The core concept – break in, nick stuff, get out- is exactly the same, it’s just kind of been massively honed over the last few years.

But anyway, I canned it because it was good but not amazing, and then I played Spelunky and it kind of hit me that there were two things in it that The Swindle really needed. The first was procedurally-generated levels, instead of traditional hand-built maps. The second was predictable guards – one of the main failings of the old version was human guards, and it was kind of weird and annoying that they wouldn’t chase you through the level or hear you and all that stuff. That kind of AI is expensive, and not massively entertaining to go up against. So making the baddies predictable, making them into bots, immediately made the game more fun. It’s one of those things where you assume an intelligent AI baddy will be the way to go but actually having a predictable guy walking back and forth is much, much more fun. 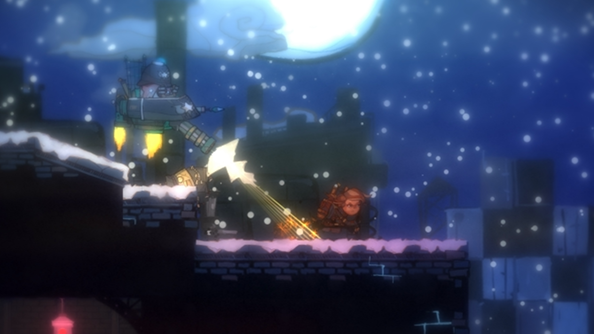 PCGN: How near to completion is it? Can we expect it to change drastically?

DM: It’s getting there. The good thing about procedural generation is that the levels all kind of build themselves now, so the core work is kind of done and finished. It’s about getting some nice variety in the environments so that different levels are enticing and fresh to play and then I’ll be throwing loads of cool stuff in – BioMods, toys, baddies, all that stuff, until it feels packed with content and things to do.

I think the thing that’s going to take some time is getting the balance right, making sure BioMods are expensive enough to be desireable but not so pricey you don’t feel you’ll ever get there. That stuff is going to take a lot of fine tuning, right now the economy in game is completely bollocksed, it needs putting through the wrangler.

So, hopefully it’ll be done next year, earlyish? Gun Monkeys did well enough that I’m lucky in that I don’t need to rush it, so I’d rather take my time and get it bang on right after all this time working at it.

PCGN: What’s going on in the story, is there a titular swindle?

DM: There is! I haven’t completely worked it out yet, so I’m hesitant to talk about it in case I wind up scrapping it (you know what I’m like). On the one hand, one of the things I completely scrapped from the old version was the idea of plot. The game just doesn’t feel like it needs one, it’d be like putting cutscenes and characters in the middle of Spelunky, right? It’s not that game. But it definitely needed an end goal to go for.

But, I didn’t just want to do a lazy “there is a big diamond and you want it so go and steal it”, it’s a bit more involved than that. It’s not a game with characters and plot and all that sort of thing, because actually that detracts from the experience, it’s more: here’s your endgame, go about it however you like. Uh, within the confines of the game world of course.

So, the idea is that the Bow Street Constabulary are 100 days away from plugging in this big clever sentient AI that’ll have 100% surveillance over Olde London Town, and obviously as a thief that’s going to put you out of a job, so you’re going to steal it before they can turn it on. Each heist is a single day, and this means there’s a new resource to manage. When you played it for PCGamesN a few months ago, I remember you had this tactic of running in, grabbing some cash bags and leaving again almost immediately. Which was a perfectly valid tactic, but kind of game-breaking. Now you’d probably be thinking “this heist has cost me a day, I should probably stick around and grab what I can, because the clock’s ticking…”

As I said, it’s kind of up in the air. I’m not beyond scrapping it if it doesn’t work. 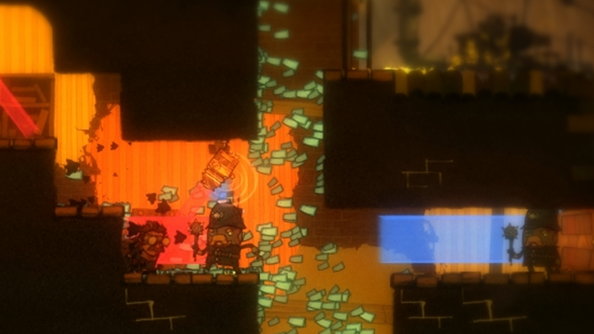 PCGN: You are a funny man. Is this a funny game?

DM: It isn’t really. It’s not po-faced and serious, but the humour kind of comes from the design of the bots and the emergent gameplay situations you get from having a randomised world and a load of tools to dick about with. There’s no bits where there’s suddenly a joke about a bum doing a big fart, or anything like that. I’d like to do another all-out funny game, but the context has to be right or it just won’t work.

PCGN: Can you tell me more about how The Swindle procedurally generates levels?

DM: Yeah, so what we do is basically take a bunch of little square tiles, all set up in a big block. The first thing the level generator does is hollow out rooms, and then sets about joining them up with corridors. After that, it removes the roof so that’s kind of suitably sloped or jaggedy, and then picks sensible places to pop windows or doors, all that kind of thing. This is also where it places heist-critical objects like computers or security stations.

The good thing about this system is it’s genuinely random; no two buildings are ever going to be alike.

After that, there’s a pass to sort out the interior, randomly generating room environments and picking suitable wallpaper for things like Kitchens or Cellars, and popping beds in bedrooms or furnaces in the basement.

It’s a big long process, and it doesn’t always look like a house particularly, but it’s more important to me to have fun environments than something that looks right but is boring. Besides, it’s Steampunk so you can get away with anything. “Oh yeah, it’s a steampunk house that’s why there’s suddenly a big long vertical drop onto some spikes. Steampunk. Crazy Victorians.”

PCGN: Will the layouts change depending on where the level is set? How will a level in the slums play different to a level somewhere else?

DM:I can tinker with some settings to make different environments feel slightly different. Warehouses have a more horizontal layout, for example. There are loads of little tweaks I can do to make everything feel a bit different. Mansions have bigger rooms, Casinos are big tall buildings. Slum buildings don’t have the same sort of security as the higher-up levels, like locked doors or reinforced windows. PCGN: Have you decided what death means in The Swindle yet? Will you reset all character progress or will some unlocked abilities remain?

DM: Nnnngh not quite yet. It’s up in the air whether or not you keep your kit, honestly it’ll be whichever winds up feeling like the most fun. There are a few new UI elements to go in, and once that’s done I’ll be setting up the game to handle both systems and keep tinkering and flicking between them to see which suits.

PCGN: What are some of the high-end gadgets like? How skilled a thief is it possible to create?

DM: There’s loads of kit you can use, and it’s kind of up to you which ‘skill tree’ you go along. By and large it’s sensible to be a Jack of All Trades, a bit, since bombs and double jump make it so much easier to get yourself out of a pickle in a hurry.

High end thieves have a couple of neat tricks – Teleport works really well, you can nip through locked doors or walls in a puff of steam. Really handy for evading the police in a pinch, especially if they have you cornered.

There’s also BotConfuse, which is handy. If you’re approaching a complex room where there’s very little margin for error, you can hack all the bots remotely and they’ll start taking each other out.

Basically the idea is to get enough of the kit that you can rob a big building without getting in a mess.

PCGN: Will it be possible to play entirely stealthily with no murders or sadness?

DM: Oof, probably not. Maybe I should make an achievement for getting through without clobbering anything. It’s probably possible, but you’ll be constantly setting off alarms; you need to take out guards in order to have the time and safety to hack computers.

If it helps, think of the game like Batman, none of the bots are dead from your vicious pummelling, they’re just sleeping?

PCGN: Finally how many weapons are in the game and where do you get your inspiration.

DM: Four billion weapons, and I mainly get my inspiration from lolly stick jokes.

The Swindle is expected to launch some time in early 2015. You can learn more about the game, as well as things you didn’t even want to learn about, by following @danthat on Twitter.