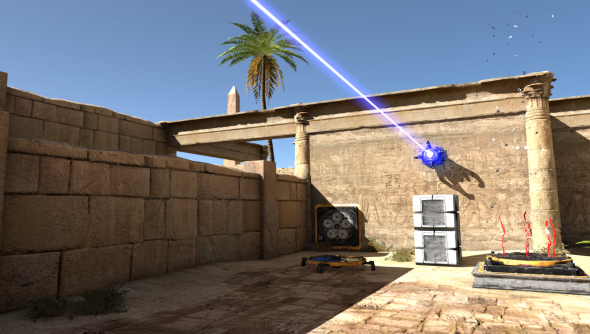 You may know Croteam as makers of Serious Sam, the games about shooting massive guns at enemies with bombs for hands. Well, they’ve now made a first-person puzzle game which questions the essential role of consciousness in humanity. Who’d have thought it? And if you did think it, does that prove your humanity? Or could your brain just be a big collection of programmed thoughts?

The Talos Principle is Portal without the jokes.

The Talos Principle started life as an experiment. Croteam had grown bored of the way Serious Sam used locked doors. Players had to kill all the enemies in an area until one of them dropped a coloured key which they would then use on the correctly coloured door. They wanted something more engaging. They experimented with forcefields that could be deactivated with jamming devices and laser beam relays that you could direct into sockets and deactivate barriers. They even made a system where you could record a copy of yourself and play it back as a hologram, letting you essentially solve a puzzle in co-op with yourself.

Croteam took all those experiments, took out the guns and enemies, and turned that into The Talos Principle. 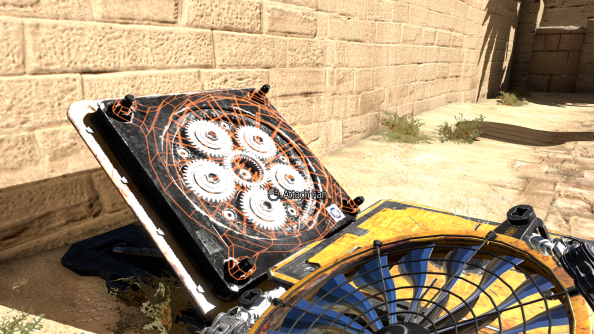 Talos starts off slow, with puzzles based solely around jammers. The tool looks like a video camera on a tripod and whatever electrical system you point it at deactivates – be it forcefield, suicide drone, or machine gun turret. You’ll be solving those in under a minute.

When you’re given relays things become more complex. Some puzzles have power nodes latched onto the wall, some emit power and others receive it. You can use relays to link the in nodes with the out nodes by a laserbeam. You can chain relays together, too, guiding the beam through a maze of corners. However, there are different coloured nodes, red and blue, and a relay can only carry one colour, so later puzzles have you trying to power down multiple forcefields with multiple beams without crossing any of the streams.

As more tools are added to your arsenal the puzzles become more complicated. Croteam have made some absolutely brilliant puzzles in Talos. They constantly have you rethinking how you can use the tools you have available. You’ll often find yourself having to take a step back and try to look at the puzzle room with fresh eyes to find the solution. 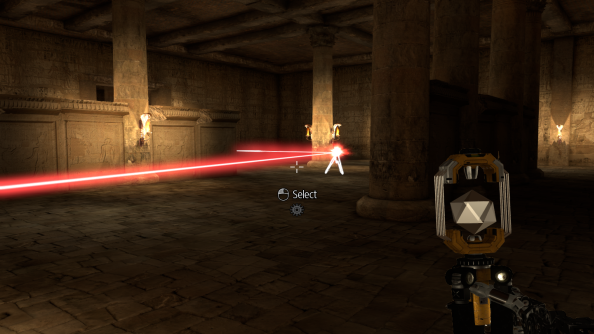 The world’s made up of multiple linked hubs: there’s three hub worlds that each contain teleporters to seven different islands loaded up with at least five puzzles apiece. On top of that, there’s a central hub with a seven story tall tower, filled with puzzles, too. If you complained about Portal’s brevity then Talos is for you.

On its puzzles alone, Talos is excellent and will give you hours of fevered puzzle solving. It’s the things that are wrapped round that core that let it down.

Leading you through Talos’ puzzles are two characters Elohim and Milton. Elohim is a voice that booms down from the sky and claims to be God; Milton is a software assistant that you type messages to via computer terminals. Elohim tells you he created this world to test you and give you purpose while Milton quizzes you on what’s essential to being human. It’s a po-faced treatise on consciousness and humanity and it doesn’t fit the game.

The puzzles you solve feel completely disconnected to this overreaching story and the themes it’s discussing. Unlike Portal, whose characters are actually part of the world, Elohim and Milton are outside it. To talk to Milton you have to access a retro computer and read walls of texts, completely taking you out of the action of the core game. 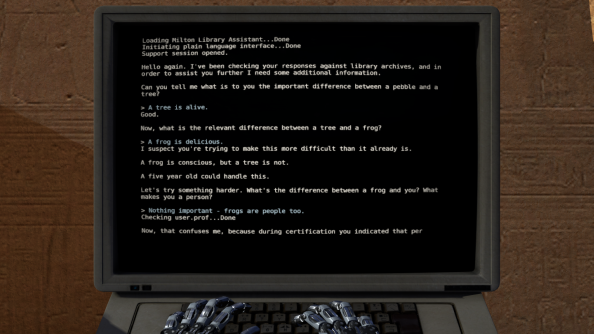 While the puzzles are great the game feels like a developer build. The team have reused artwork and sounds from the Serious Sam games, giving everything a place-holder feel. The layout of hubs, teleporters, and puzzles rooms dotted about the place feels haphazard, like a developer’s test environment. You could reason it away behind a story of a testing God but it doesn’t make it any more fun to play.

The real problem is that Talos suffers in comparisons. While Portal was just a series of connected puzzle chambers it always felt that a developer was leading you through it. The Talos Principle feels like boxes within boxes, left by the developer for you to play in.