The PC has been a haven for experimental horror games recently, providing a platform for niche scares such as Amnesia and Five Nights at Freddy’s. There are plenty of games on Steam that offer various methods of terrifying players, but The Town of Light has a markedly different approach to making players uncomfortable.

There are no monsters in The Town of Light, at least not in the traditional sense. Rather than toothy beasts jumping out of cupboards, memories are what will send a chill up your spinal cord (which will mercifully remain in your back). Flashbacks of barbaric medical practices, terrified patients, and abuse best left forgotten. And the worst part? It’s all based on fact. The Town of Light is a journey into the real world of mental health ‘therapies’ that our ancestors employed throughout the 20th century.

Our decent into the past comes courtesy of LKA, an Italian indie developer. The game is set in the Volterra asylum, a real hospital in Tuscany once home to 6,000 mental patients. “It was the vanguard in the use of some mental health therapies at that time,” explains screenwriter and art and technical director Luca Dalco. “Patients there were usually long-term sick individuals, people with no close relatives who were sent to Volterra to end their lives. This is the reason for the asylum’s the nickname: ‘The place of no return’.”

The asylum was closed in 1978 after authorities deemed the facility’s practices cruel. Visit now, and you’ll find crumbling walls, peeling paintwork, and rusted remains of medical equipment and beds. This is the world you’ll explore in The Town of Light, and the in-game replica is frighteningly realistic. “The fact we were so lucky to be able to access the actual structure today made me decide to set the game here,” says Dalco. “We could have created a fictional asylum if we wanted, but since our goal is to portray the story in the most realistic way, Volterra was the natural answer.”

The Town of Light sees you play Renee, who returns to Volterra to try and remember what happened to her during her stay at the asylum. The base experience is reminiscent of Gone Home and Dear Esther; walking from room to room of the abandoned estate, engaging in light puzzles and finding clues to your lost memories. They’re memories that are especially painful; LKA have not shied away from the challenges of mental health. “We wanted to make a game that covers something that we discovered is really difficult for a traditional medium to cover,” says Dalco. “Mental illness affects a huge amount of the worldwide population in various forms, yet still we do not hear a lot about it. We have decided to tell a realistic, contextualized experience with a focus on the mind of the protagonist.” 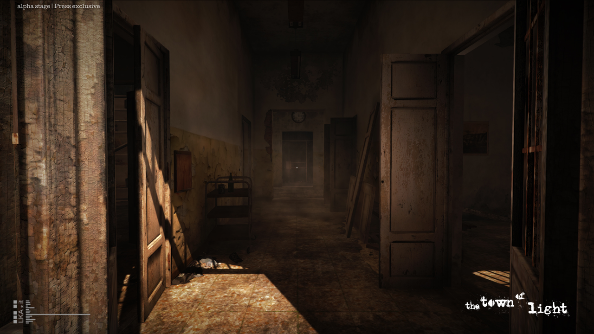 Treatment for ill patients at Volterra was, essentially, barbaric, and as Renee starts to explore the facility she begins to remember the procedures and staff. An early memory is particularly disturbing, as she recalls going to a wash room and being sexually assaulted by one of the nursing staff. “The Town of Light aims to tell a story inspired to real facts, and some of them we are aware will create discomfort in some people,” says Dalco. “This is something we clearly flag when players launch the game. Those stories happened, those type of characters you meet existed.”

By presenting the asylum and its therapies as they were, Dalco hopes players will reach their own understandings of this troubled period of medicine. “The only way to avoid judging the things that happened is by reporting them as they were. We’re allowing the player to form their own opinion, experience their own story, discover their own truth,” he says. “Town of Light will allow the player to live the same stories from four different points of view. It is incredible how things can appear completely different when you change the perspective…”

To create the realistic depiction of the hospital, LKA not only visited Volterra, but also spent countless hours researching medical history and stories from various institutions. Dolca sent me a list of 34 different books the team read for research, ranging from historical and contemporary studies to witness accounts from former nurses, doctors, and patients. “We spent a lot of time researching everything possible to make sure that what is in the game is credible and coherent. The choice of using a real location is used to increase the immersion in the game. Being in a place that you can find pictures of on the internet and in books contributes to feeling of being part of something real, something that exists. This is coherent with the message we want to transmit with the game,” he explains.

The heavy research and focus on mental health makes the pace and atmosphere of The Town of Light feel very deliberate. There’s a lot of slow walking back and forth, and on occasion monotony sets in. The dull beige of the rotting walls makes you feel like you’re going insane, and key memories are revealed in slow, cross-hatched animations that feel feverish. The lack of traditional horror cliches like running and hiding doesn’t prevent the game feeling scary; appropriately for the subject matter, it’s all how it manifests in the mind. “For some people horror is jump scares, blood and chainsaws. For other people horror is more psychological, made of a combination of suggestion and tension,” says Dolca. “I believe there is no greater suffering than mental health issues. In the Town of Light you walk into a real location that exists, discovering episodes that are realistic. The player will start to think that what they are experiencing is real, has happened to someone, at sometime and in some capacity.”

If creeping dread and the frank realism of terrible medical practices is something you feel is missing from your life, you’ll be able to explore Volterra’s wards and surgeries when The Town of Light releases later this year.