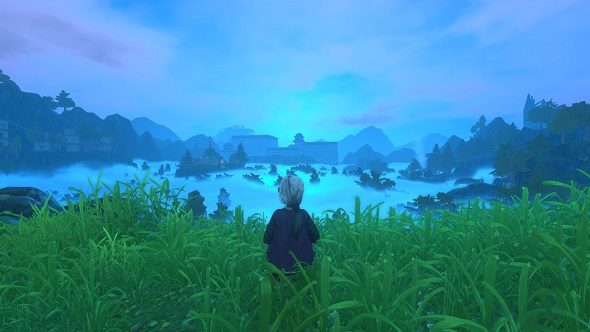 With so many games about death being obsessed with violence and gore, The Wild Eternal offers a more chilled-out exploration of human mortality. Set in the Himalayas during the early 1600s, The Wild Eternal has you playing as an old woman called Ananta, who is looking for a peaceful end after a lifetime of suffering.

Meeting a demi-god in the shape of a fox, this animal spirit promises to help you break the cycle of reincarnation if you help him in his own quest. Taking you a lush wilderness hidden within the Himalayan mountains, you and your foxy friend will travel together in order to fulfil your desire for a peaceful death.

As you travel through this fog-covered wilderness, Ananta will discover ancient shrines and artifacts which will grant her new abilities. Keep in mind you are playing as an elderly woman, so these shrines will mostly improve your sight, hearing and mobility, rather than giving you heat-vision or the power of flight. Your journey will also have Ananta dealing with wild and sometimes dangerous creatures. Some will help you along the way while others may attack, so be careful where you tread. These encounters will help Ananta work through her past trauma and possibly lead to her escape from the cycle of reincarnation.

If you’re a person whose back goes up when they hear the phrase ‘walking simulator’ The Wild Eternal isn’t going to be for you. All of the action is sedate, with Ananta and her fox companion calmly strolling around the wilderness, trying to fulfil her quest. There is some light puzzle solving and the occasional bit of platforming but by Ilsanjo’s own admission, The Wild Eternal is “designed to be a meditative hike riddled with powerful narrative and mystery.” At no point is Ananta going to go full Rambo and start gunning down the wilderness’ mystical animal population.

However, for those looking for a relaxing nine hours of strolling around a calming environment discussing the nature of death, The Wild Eternal may be the thing for you. It is usually priced at $15/£11 on Steam, but it is currently on sale for 20% off until April 20.