CD Projekt Red did, it’s fair to say, a pretty wonderful job of bringing Andrzej Sapkowski’s books to life with its The Witcher series of games.

Take the game’s interpretation of the lonely Witcher keep of Kaer Morhen. Sapkowski describes it as being ‘huddled against the stone precipices’ in the mountains of Kaedwen, and sure enough, when you encounter it you’ll find a rocky keep crouched under high walls. Then there’s the bustling streets of Novigrad, which Sapkowski presents as ‘the cradle of culture,’ which you can see reflected in the banks, brothels, and bathhouses you run between in The Witcher 3: Wild Hunt.

But there’s a lot more to manifesting this architecture in a manner sympathetic to the original author’s vision – game development demands embellishment. “It’s not as straightforward as taking a description from the books and recreating its content in the game,” Peter Gelencser, level design coordinator at CD Projekt Red, explains. “Adjustments are often required […] to make a location stand out or have it fulfil a particular purpose during exploration.”

First, the descriptions in Sapkowski’s books are passed a human mill of quest designers and environment artists. They love the lore, but consider the flow of the game and player experience the priority. As such, locations will go through changes to match the story, activities, and feel according to Gelencser. 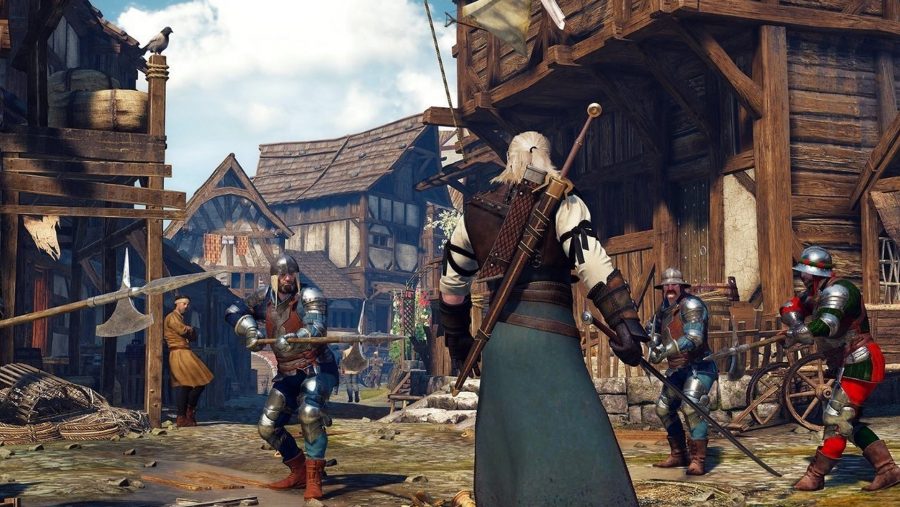 The source material is instructive, then, but it’s more of a valuable starting point than a blueprint. For instance, with The Witcher 3’s Novigrad, the team knew it wanted the environment to feel huge to match the descriptions from the books. In the short story The Eternal Flame, Dandelion emphasises just how large Novigrad is:

If you take a walk around Novigrad the team’s successful translation is immediately apparent. Novigrad, in stark contrast to the war-torn and starving Velen, is a sprawling city. It’s an amalgam of different cultures, classes, and trades, with opulent buildings sat alongside mud-splattered quarters for the poorer residents. And with so much to discover around every corner it’s easy to get lost in its streets.

“From the outset we knew that if Novigrad didn’t astonish or amaze, the whole game would have suffered,” Gelencser says. “The city needed to be grand and believable, give players opportunities to get lost, experience the shine and scum, meet lords and beggars, and everyone in between. In this regard I think we came through and delivered something exceptional. We’re very fortunate to have had the talented people, as well as the technology on board that let us go the extra mile – miles, even.”

Kaer Morhen is a similar story. Again, the book served as a guideline, helping the team to create the environment in both the first game and The Witcher 3. In the book, Blood of Elves, Kaer Morhen is described as being ‘famous for its wildness and inaccessibility’:

‘The wind howled savagely, rippling through the grasses growing over the ruins, rustling in the hawthorn bushes and tall nettles. Clouds sped across the sphere of the moon, momentarily illuminating the great castle, drenching the moat and few remaining walls in a pale glow undulating with shadows, and revealing mounds of skulls baring their broken teeth and staring into nothingness through the black holes of their eye-sockets.’
Blood of Elves

During the making of The Witcher 3, though, the team started taking more liberties with Kaer Morhen and added new details to sell the player on the passage of time. These changes took advantage of the game’s improved tech. As a result, Kaer Morhen in The Witcher 3 feels more overgrown and dilapidated, with an abundance of weeds and a huge wooden scaffolding holding the keep together. 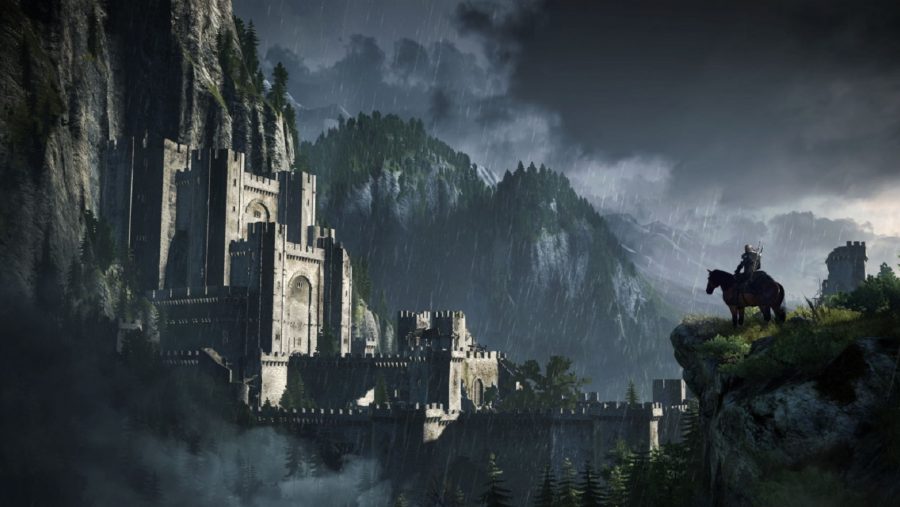 “A lot of time has passed between the two instalments and it would’ve been a great shame and waste if we didn’t show this in the game,” Gelencser elaborates. “This freedom was a fantastic driving force to explore that which we simply weren’t able to before. It was a lot of fun, as well as a chance to look back on where we came from, which kept motivating us to push the scope and quality further and further. There’s also the case that members of our studio’s environment art and level design teams are really into ruins and take great pleasure in putting as many vines, cracks, moss, and deteriorating scaffolds as they can get away with.”

If Novigrad didn’t astonish or amaze, the whole game would have suffered

In The Witcher 3, the team also had the opportunity to recreate the surroundings of the keep for the first time, letting players see even more locations from the books. This includes ‘the gullies and gorges’ that Triss explores on her way to Kaer Morhen at the beginning of Blood of Elves.

“The two main considerations were lore and opportunity,” Gelencser explains when we ask him about the area’s design. “The former acted primarily as quest design fuel, whereas level design went on a hike, metaphorically speaking, and explored the land beyond Kaer Morhen’s walls as sculptors of a forgotten valley.

“We drew a lot of inspiration from the natural shapes of the area surrounding the keep and iterated on them with passion and curiosity. It was like putting a puzzle together – the lands, points of interests, paths, caves all serving as pieces of that puzzle.” 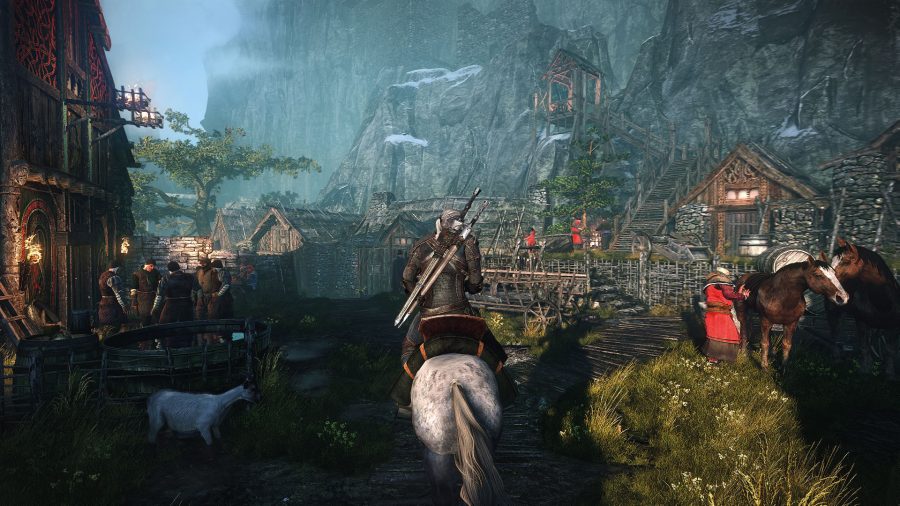 Arguably the biggest challenge during the development of The Witcher 3 was the region of Skellige, however. Not much is written about Skellige until the fourth book in the saga, The Tower of the Swallow, in which most interactions with the islanders come from chance encounters on the main continent. Nevertheless, in the book, Sapkowski does provide some insight into what Skellige is like, such as when Yennefer looks out from Kaer Trolde:

‘Almost the entire archipelago was visible from the upper terraces of the citadel of Kaer Trolde, the main fortress of Ard Skellig. Straight ahead, across the sound, was An Skellig – low and flat on the south side and covered by steep fjords on the north. To the left, far away, the sharp tusks and high cliffs of green Spikeroog rose above the waves; the peaks disappearing in the clouds. To the right one could see the steep cliffs of the island Undvik, on which swarmed gulls, petrels, cormorants, and gannets.’
The Tower of the Swallow

Skellige’s topography is accurately represented in The Witcher 3, with players able to climb to the top of Kaer Trolde and see pretty much of all what’s described in the book. However, the development team also looked at tons of reference material from real places, including the Faroe Islands, Medieval Iceland, and Greenland, to flesh out the region and create an open world that felt distinct from the main continent. 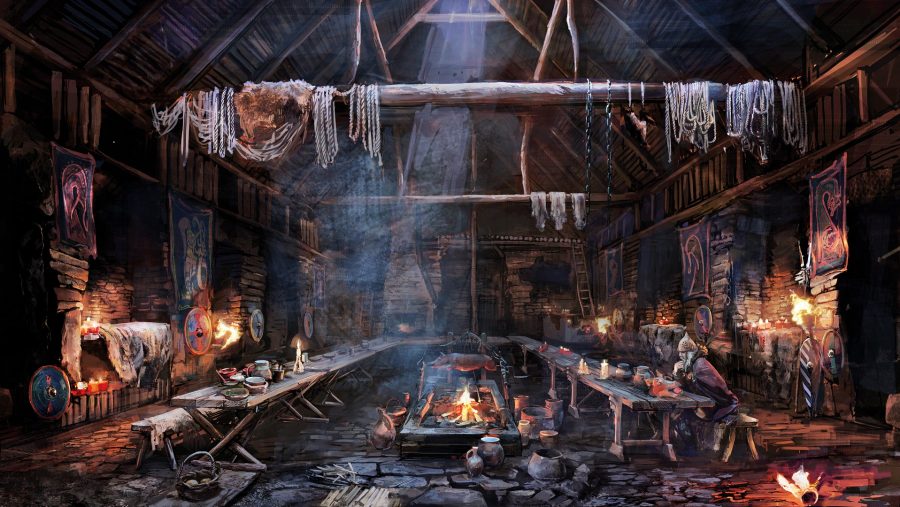 “We also looked into cultural models of isolated societies – how they react to outside influences, what’s their attitude towards newcomers,” Jakub Szamałek, principal writer at CD Projekt Red, adds. “We then made sure that all the settlements and villages make sense within their context, and so the walls are made from local rocks rather than bricks, as clay would have been scarce on these rocky isles. There are few fields, because Skellige’s soils wouldn’t have been able to support intensive agriculture – but shepherding and fishing plays a much bigger role than on the Continent.”

The Witcher games are pleasingly faithful adaptation of Andrzej Sapkowski’s work, bringing his world to life with an in-depth knowledge of – and respect for – the original source material.

This was no easy task, requiring close collaboration across multiple departments within CD Projekt Red and a delicate balance of reverence and creative licence. And that’s before you factor in all the research that went into making sure the world feels convincingly populated and that every region has its own history and sense of place.

If you haven’t yet read The Witcher Saga – or the short story collections The Last Wish or The Sword of Destiny – we wholeheartedly recommend picking them up. They’ll deepen your appreciation of the daunting task that CD Projekt Red faced in making the Witcher games – and, indeed, the producers of the new Witcher Netflix series – and reinforce your understanding of Geralt’s richly layered world.