The Tobii EyeX looks like an interesting piece of kit. It tracks player eye movement, adjusting the game’s camera to follow wherever you’re peeking, with graphics and resolution changing as you do. It could be worth keeping your eye on.

Assassin’s Creed: Rogue is the first triple-A game to implement the tech, so you can finally climb the crow’s nest and scope out the horizon with your own eyeballs. You’re a real pirate now.

Joking aside, some of the ideas the tech could produce, particularly in games developed around it, make sense. For example, the ability to look around while travelling in a different direction – which would probably mostly benefit games that stick you in a cockpit or behind a steering wheel.

The technology is dubbed ‘Infinite Screen’, because the Tobii EyeX apparently gives the illusion of hieghtened immersion. Avalanche Studios and Expansive Worlds have jumped onboard, making the tech compatible with their free-to-play hunting sim theHunter, following its success in theHunter: Prime.

“Once we saw the way our community responded to the implementation of ‘Infinite Screen’ technology in theHunter: Primal, we knew we had to bring eye tracking to theHunter as well,” said Avalanche Studios CEO Pim Holfve. “Our goal with theHunter is to create the most realistic hunting simulator ever. Eye tracking provides one of the most immersive experiences available to games today. Combining the two was a no-brainer.” 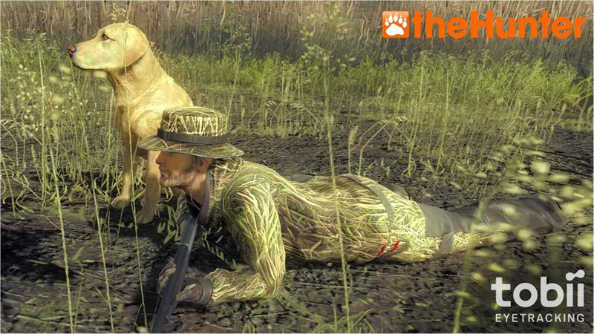 If you think the tech looks interesting or are completely in love with shooting virtual animals and love staring into their fading, glassy eyes with your own, you can pick it up for $99 with the promo code ‘TheHunter‘. Obviously there aren’t too many games that are compatible with it just yet, so it might be a good idea to hold off for now, keeping it in your peripheral.