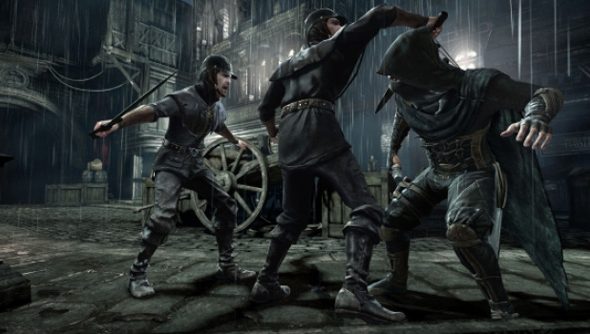 Hello and welcome to a very late review of Thief, a videogame that you might remember came out five whole days ago. That’s approximately two thousand years in videogame terms. The thunderously clicking audiences of the internet have long since flocked to newer and better Google ranked search terms such as SOUTH PARK: THE STICK OF TRUTH and ELLEN DEGENERES OSCAR SELFIE.

If there’s one thing I’ve learned here on the world wide web, it’s that you have to move fast or be left behind in the SEO dust, clutching at IPv6 straws and crying into another internet thing. Be fast, or have a dumb novelty review where you pretend to be Garrett himself instead. Yes. Yes that probably works.

Hello I am Garrett, the master thief, and this is my videogame in which I am the main guy. My videogame is called Thief, after the thing that I am. In my videogame it’s my job to steal loot and sneak around in shadows avoiding detection. I live in a clocktower in the middle of a perpetually crepuscular city, which is great because that’s ideal for doing all the sneaking that I love. I’ve got about eight missions to do here, with another twenty odd optional missions that I can do around the city at my own leisure, either in between those eight main missions or after I’m finished the game.

Sometimes my missions are very interesting indeed. I often sneak into mansions and manors with multiple entrances, lots of rooms and different paths towards my objective. Sometimes there’s a safe with a combination that I can crack by reading a letter somebody left in the next room. These are my favourite missions because they reward my exploration with unique loot, which I keep in my clocktower like a big man-shaped magpie. 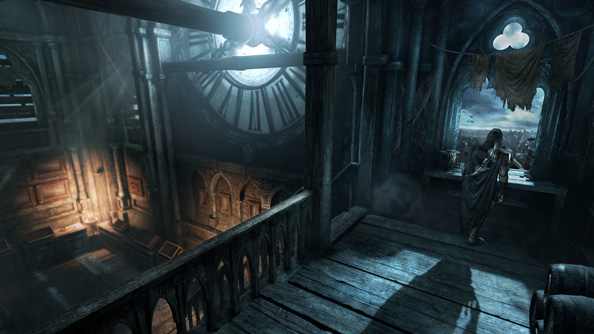 I would prefer if there were more kinds of objects to steal besides expensive pens, golden ashtrays and inexplicably misplaced gears. I’d also probably enjoy a wider variety of furniture to steal from. You know how almost all of your friends own those lovely, cheap EXPEDIT shelves from Ikea? Well that’s what it’s like in this city, with a identical sets of drawers and cupboards popping up in everybody’s houses over and over again. This is an Ikea furnished videogame. Regardless, these are still some damn fine missions anyway, hoo boy.

Hey, let me tell you something else. I’ve already mentioned how I love sneaking and that I am a master thief, yes? Well here is a list of some things I really don’t like doing, but I find myself somehow compelled to do, as if I am driven by some unseen narrator with no idea of what I’m best at: escaping from burning buildings in extended scripted sequences; zombies that I have to sneak by very slowly and who keep reappearing throughout the last third of the game; broken glass that’s everywhere for no real reason; boss fights in rooms that are inexplicably difficult to get out of; cutscene after cutscene after cutscene.

Here are some more: Mirror’s Edge in a wig parkour sections with insta-fails for deviating from the bit of rooftop the game wants you to run along; thrill-free third-person climbing sequences; and the fact that I have absolutely no idea what the point of anything I’m doing is, or who the characters I’m interacting with are, or why I should even begin to care. The story (of my life) is absolute dog balls and guards and the people I meet spout total, incomprehensible gibberish. If you play my videogame to completion, please do get in touch and tell me what happens in the final cutscene, because I honestly have no idea. 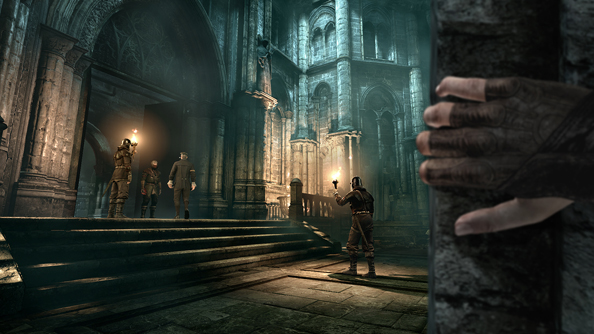 My time as a master thief is split fairly evenly between the things I want to do and things I don’t, which leaves me feeling existentially ambivalent. I’m good at the things I enjoy doing. Picking up loot and feeling around the edges of painting frames for switches is gratifying tactile, and shiny objects make a satisfying cha-ching as they’re scooped into my bottomless swagbag. Moving through the world and ‘swooping’ between shadows behind guards’ backs is fun, and I don’t even care that I have a magic eye that highlights traps and loot because I can ignore it or turn it off completely without compromising anything.

I’ll tell you where the compromises are though: the city is restrictive in its design, not open ended by any measure but instead a collection of small walled off areas connected by street level alleys, some rooftop level pathways and loading screens obscured by very obvious plays for time in which I have to squeeze around some crates or hammer E to open a window very slowly. Traipsing back and forth through the central hub area again and again becomes a grating chore as I must repeatedly evade the same eyelines of the same two guards marching in their same, unchanging patrol pattern. 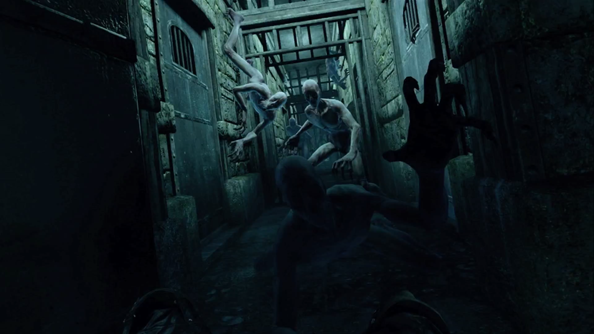 The bits of the city on which I’m allowed to climb are painted with obvious white scratchmarks and glowing blue grates. I’ve got a special claw to climb those. I can only use rope arrows on special beams bound in white rope, of which there are only about two dozen in existence. There are also certain gaps that I can jump across and, for some reason, some that I cannot muster the willpower to. Similarly, there are windows that I can jimmy open and windows that I can’t, doors with pickable locks and doors that I’m fully expected to believe don’t even have handles. Sometimes I fall down holes and die. Don’t get me wrong, I am aware that I’m a character in a videogame, but that is some tired old shite.

In fact, of all the games I’ve been in, this one is definitely the worst. I’ve been in some terrific games though, so that’s not as damning a verdict as it looks. If I adjust the difficulty by turning off HUD elements, never ever get into any sort of combat with the incompetent AI and try to ignore huge chunks of the game in which I’m forced into criminally unimaginative and unstealthy situations, and then pretend that the zombies don’t exist, and then maybe just not play the last two chapters at all, then this is an okay game with two or three good missions.