In Thieftown, where Thief is set, everybody is exceptionally worried about thieves stealing their stuff. That’s pretty much all anybody talks about in Thief. That and the plague. “I hope no thieves steal my stuff,” is a thing you might hear somebody say, “because I’ve got the plague and things are pretty bad for me already.” For a city so loudly concerned about thieves however, there are an awful lot of unattended solid gold ashtrays left sitting out on balconies. For a town so vocally anti-burglary there is an excess of ornate goblets resting on windowsills like alluring metal pies.

As a thief in Thief you naturally have unfettered access to balconies and windowsills and ashtrays all over the city. Those ashtrays are yours for the taking. Your ashtray is my ashtray. Stealing ashtrays is fun and I’m not going to stop. This is Thief.

As a game world, Thief’s city has a been built to be emptied. Having played the first four and a bit chapters, I’ve concluded that the game is never more enjoyable than when you’re ransacking buildings absolutely, pilfering from every closet and drawer with all the itch-scratching compulsion of bubble-wrap popping. Loot can sit out in the open, where it glimmers slightly (unless you’d rather it didn’t, there’s an option). Click on this loot and Garrett’s light fingers will reach out and swipe it away, instantly transforming it into gold with a satisfying alchemical cha-ching.

More loot can then be found secreted in drawers and cupboards, which must be opened one by one before their contents can be collected and cha-chinged into more currency. Drawers and cupboards left open will alert guards and other NPCs to your presence, so it’s wise to shut them once you’re finished stealing from them. Also, fully looted drawers cannot be opened again, which for some reason is also kind of satisfying. The creeping suspicion that you might have missed a drawer is sidestepped. Once you’re done with a drawer, there’s no need to touch it again. Just click on every interactive object until your pockets are full, like Supermarket Sweep, except when Dale Winton comes around you have to hide in a wardrobe. 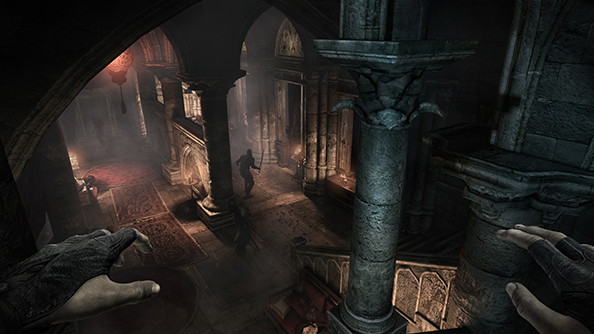 Taking things in Thief is really fun, it must be stressed. It has something to do with the sound and the deft animation of Garrett’s confident, gloved hands. Later on you can unlock some new tools to access even more lootables. A razor blade to cut paintings out of their frames (apparently Garrett’s magic cash converter loot bag doesn’t work on picture frames, but that’s okay). You also get a wrench to pry off plaques and unscrew ventilation shaft covers to allow access to hidden areas. Once you’ve got these things, you’ll naturally want to revisit old chapters and maximise your haul, which the game readily allows for.

Beyond the several city hub areas that are freely explorable between missions, Thief is broken into discrete narrative chapters, walled off chunks of level in which you’re monitored and scored for your actions. Times spotted, lootables looted, guards moidered or laid unconscious – everything is tracked and then displayed back to you in an end of chapter summary screen that also compares you to your friends. So you know who is the best at Thief. 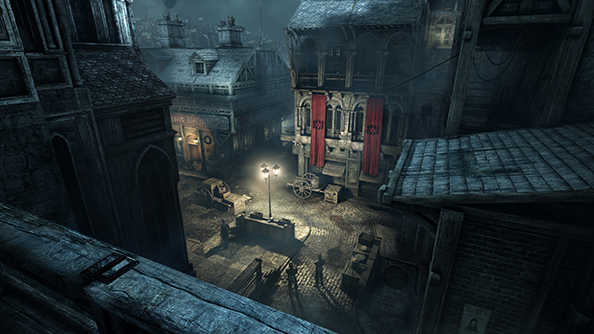 Completely emptying a chapter of its precious objects is optional of course, a personal challenge to set yourself but one that the game will measure and praise you for. You can also ignore loot if you want, and head straight to whatever objective is floating around on the HUD. Whether you take them or not, optional side-quests will spring from overheard conversations or be discovered inside notes and journals left scattered around buildings. The game compels you to skive off and indulge your rogue instincts.

In the very first chapter, for example, you’re tasked with making your way back to your clocktower home, a route that takes you straight through the glittery guts of a jewellery store. Stealing a gem-encrusted mask becomes your primary distraction, but by leafing through the jeweler’s correspondence in the workshop basement you discover that the mask is a fake and that the true prize has been hidden elsewhere on the property. Decode the letter (by which I mean, take each of the numbers clearly printed above each paragraph) and you’ll get the combination to the nearby safe, inside of which you’ll find the unique piece. This is made more difficult by the jeweler being in the room with you, flitting between tables like an excited bee. 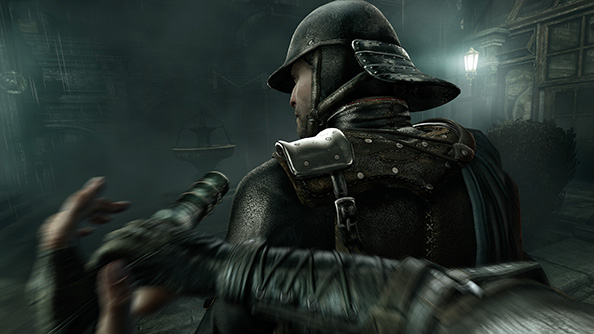 Garrett keeps these particular treasures on display in his dusty clocktower residence, like a big magpie man. They’re perusable, physical achievements, tokens of your competence as a taker of things, a reallocator of belongings. This the new Thief game at its best, when you set yourself a challenge of taking everything and the game rises to that challenge with interesting guard patrols and well-stocked abodes, then lumps you with a prize.

Where the game wobbles is when it tries to do much else, and as the opening chapters progress the plot pulls you further and further from Garrett’s vocation. You go from jobbing master thief to a lackey sent to a foundry to retrieve a ring from a corpse, or made to infiltrate a fortified tower to rescue an incarcerated buddy. The main objectives are often at odds with the most enjoyable parts of the game and at their worst they seem to betray a misunderstanding of what Thief is ideally supposed to be about. At its very lowest point, the game features free-running sequences in which control is taken off you in a sort of obligatory and half-hearted hat-tip Mirror’s Edge, and one-directional, third-person, Uncharted-lite climbing bits – which we can probably all agree is absolute rubbish. 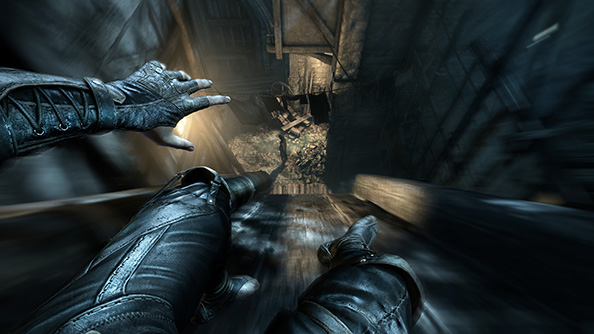 The guards aren’t especially bright either. You can use arrows and throwable items to guide their attentions in certain directions, but their hunting behaviour is either so incompetent as to be not apparent or simply non existent. I experienced a guard brushing right past me, his arm clipping through half of Garrett’s face, who somehow didn’t notice I was crouching there. If you do happen to be forced into combat (without having upgraded your fighting ability) the game devolves into frantic clubbing. The bad kind. Or the good kind of you hate clubbing. Death doesn’t come quickly to the cornered thief, instead it’s a messy and confusing omni-directional beatdown, as single-minded guards bash and bash and bash.

Arrows have their uses, but there’s little scope for inventive applications of them in early chapters, or even much need to reach for the bow at all. Mostly, you’ll use it to set up a new path with a rope arrow, or knock down a ladder with a blunt arrow. By the end of the playthrough, which is just a short portion of the early part of the game, I’d accidentally packed my quiver full of unused arrows. The ability to swoop from shadow to shadow is sufficient to stealth past most guard patrols, and on the mid-range difficulty setting they’re rather short-sighted, even as you stroll through broad torchlight. 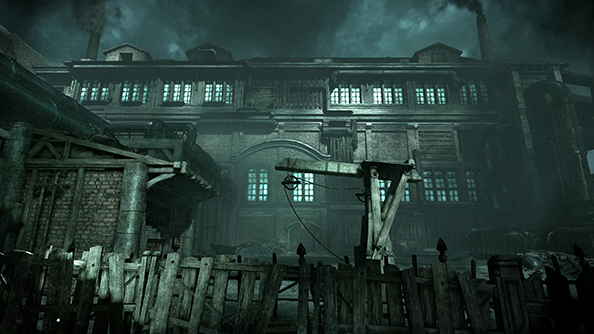 And then the game pulls you right back in with an optional side mission, or a clever mansion level with multiple entrances and rooms filled with chattering characters who breathe life and story into the world. There’s enough stuff to do between chapters, during the open city sections, that you might endure the earnestly disruptive and brash nature of the main plot thread. Thief is especially lovely when it’s handsy too. Garrett runs his fingers around the edges of framed paintings to click hidden switches, and he plants his hands around the corners of walls when he peeks, and it somehow feels nice.

You can also heavily customise the difficulty, switching off helpful aids to enhance the challenge. Don’t like glittering loot? You can turn that off. Want guards to spot you a mile off? Dial up their eyeballs. There’s even an Iron Man mode in which death is permanent, just in case you were afraid Square Enix had made the thing too easy. I played on the preset, middle difficulty setting, which afforded me the use of Garrett’s magic focus vision, a loot-highlighting mode that’s almost entirely dismissible if it’s the kind of thing that winds you up. There’s also, as I’ve neglected to mention it anywhere else, a magic lady in the city hub who will upgrade all of your stuff and grant you improved abilities – faster movement, a slight bullet-time effect in combat, better sneakery – all in exchange for cash.

At this stage however Thief feels erratic, a stealth game that often forgets its business and lapses into mindless, action-based tomfoolery. But at times, when the atmosphere and sense of place coalesce into a nostalgia stinkbomb, you’ll still get a hefty guff of the series’ DNA. Thief could well be a worthy successor, but I can’t yet see it settling into our hearts and minds as Deadly Shadows did. But man, it’s got picking things up that don’t belong to you and putting those things into your pocket absolutely nailed.