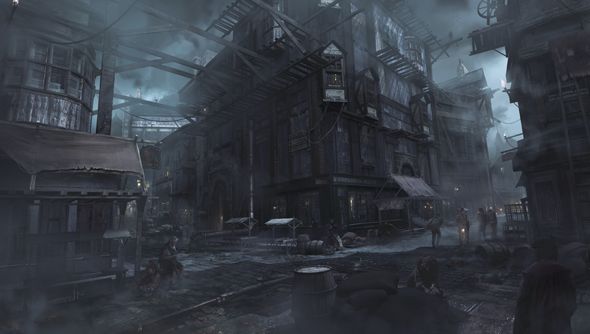 If you play Thief, which you might well do – it’s an occasionally stonking, deeply sensual stealth game – you won’t just be heisting banks and hoisting bags of swag.

No: you’ll need to hike between its missions on foot, through a City that makes a meal of crossing the street. It’s level design at its most obtuse, and at one confused juncture or another it’ll lead you to do precisely what I’m doing now: slump back in your chair and shake your head in wonder and exasperation at this least open of all the open worlds.

In Dishonored, Thief’s other (spiritual) sequel to which Eidos Montreal’s effort cannot help but be compared unfavourably, traversal is freeing. Thanks to its short-range teleport ability, Blink, no ledge is out of reach.

Moving about The City in Thief couldn’t be more different. Eidos have ditched the jump key entirely and turned climbing into a contextual action. One wall might look like another, but you won’t know it’s scaleable for certain until you’ve mustered enough faith to run headlong into it.

Garrett’s grappling claw and rope arrows – nominally tools to open up navigation – are useable only in rare, overtly-highlighted points on the map. This world isn’t open, then, but rather a series of meandering designer-designated routes.

In a series once loosely categorised as an ‘immersive sim’ thanks to its reliance on systems players could twist to their own ends, this contextual maze is probably a cardinal sin – but it gives the new, sometimes unrecognisable Thief a stifling, curious atmosphere of its own. 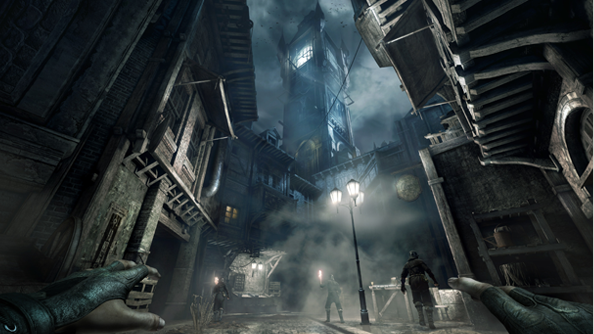 In Looking Glass’ Thief games, maps were hand-drawn, often incomplete, and sometimes inaccurate – part of a broader, philosophical aversion to filling in the corners of its fiction. Nu-Thief employs a mini-map – but you’ll be more hopelessly lost than ever. This City looks like London must have about 10 minutes before the Great Fire – with one wooden dwelling plonked haphazardly atop of another, each propped up by the building next door or spilling over into winding, cobbled streets.

Verticality in level design is often lauded for turning maps into possibility spaces – but picking a path through Eidos’ City can more often feel impossible. Makeshift wooden walkways teeter always overhead – mostly unreachable for any player unwilling to follow them back to their starting point – and there’s no such thing as ‘street level’: just this street, and the one below it, and the canal beyond that.

I’m not convinced this choose-your-own claustrophobia is entirely wilful. Thief suffered a long and seemingly traumatic development process, and where Deus Ex: Human Revolution felt robust, this new game often feels pieced together. Area transitions are frequent – covered crudely by fades-to-black as Garrett pushes through forests of street debris, or clambers through a heavy, opaque window.

Like Thief’s vents (traditionally symbols of environmental options, not stricture), these windows have to be forced open, and slam firmly shut behind almost before Garrett has time to remove his exquisitely modelled fingers. Desperate that we don’t see the mess behind the scenes, Eidos would rather entomb the master thief in whatever segment of the map he happens to occupy. 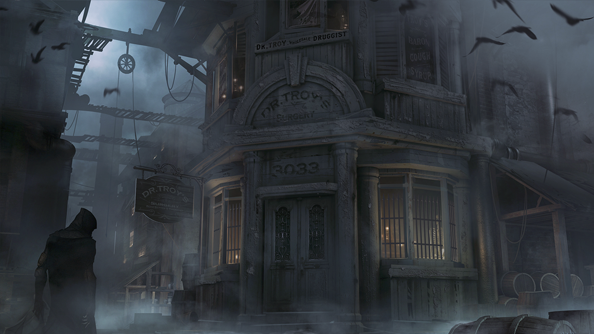 Stranger still are the times when these same windows don’t lead to new areas, but tiny, self-contained spaces – upstairs bedrooms or glorified wardrobes. From these stale places, you can still hear the guards whistling outside – but with no workable doors about and only the blank, sealed window as an exit, they feel small enough to suffocate in.

Through all this, Eidos’ strange, silvery art style makes The City’s coppers, crims and chimney stacks visible in the perma-darkness – but somehow, it doesn’t make its world easily readable. At some point in Thief’s opening hours you’ll practically crawl between a guard’s legs before you notice them – as if stumbling through a smog that’s covered The City for so long Garrett can no longer see it.

It seemed the most surefire thing in the world, to hand Thief to the Montreal developers who successfully revived its closest genre-mate – Deus Ex. But it’s as if the IP got lost in the post and wound up with Ubisoft Montpellier’s ZombiU team.

Surely the same studio can’t have built this pallid place which – don’t get me wrong – offers a strong degree of choice and solid stealth, but also this charnel, stoneskinned atmosphere quite unlike traditional Thief. It might be accidental, and in some places entirely ugly, but it’s unlike anything else you might be playing right now. Welcome to closed world gaming.